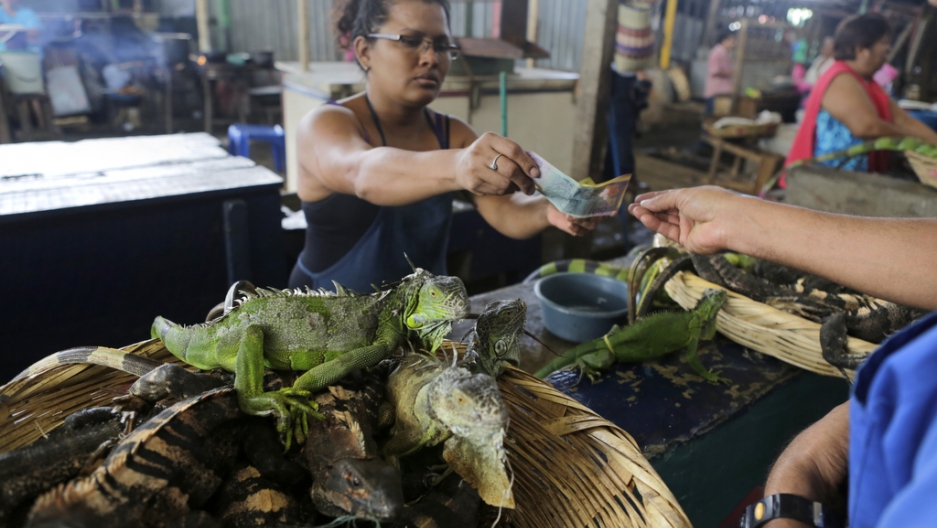 An iguana vendor sells one of the scaly creatures to a customer at the Oriental Market in Managua, Nicaragua, on Aug. 27, 2014.
Share

A severe drought is ravaging Central America and the United Nations World Food Program estimates as many as 2.5 million people are struggling to feed themselves.

One of the hardest hit countries is Nicaragua, which is experiencing its worst dry spell in 32 years. But don't worry, the government has come up with a solution: just eat more iguanas. It might work. Iguanas, after all, are already popular in Central America.

But the problem is massive: A lack of rain and unusually high temperatures — which experts have blamed on the El Nino weather phenomenon — have destroyed food crops and driven up prices of staples such as beans and maize.

#Nicaragua: What the worst #drought in over 3 decades looks like http://t.co/WZIav40DOu pic.twitter.com/5STm512WmZ

Livestock are also dying in the thousands. As many as 2,500 cattle have starved to death since the onset of the drought in May. A further 600,000 cattle are at risk if the severe dry spell persists. Unfortunately, experts think it will.

The impact of the drought, which has been compounded by the 2012 coffee rust plague, has put the brakes on economic growth and fueled inflation in a country where nearly half the population lives on less than $1 a day.

To relieve the worsening food shortage, the WFP is distributing rations of kidney beans, maize, vegetable oil and rice to 46,000 families in the worst-affected areas.

.@WFP has provided food for ppl affected by drought in 66 rural municipalities in #Nicaragua: http://t.co/Ztz6mJ5Lzw pic.twitter.com/E1QFuDnabB

But it’s not enough. And that's where the iguanas comes in.

“Breeding iguanas brings two benefits,” said Guillermo Membreno, a government land management expert. “Not only does it supply dietary protein, it also offers a commercial use for the animals.”

According to Membreno, iguanas contain significantly more protein than chicken: 24 percent versus 18 percent.

“Farming iguanas — and not hunting them in forests — is a good way to deal with the food shortages caused by the prolonged drought," he added. "Even if you’ve only got 10 iguanas, you’ve got something that offers food — and cash if you sell the iguanas for their meat, their skins or as pets.”

Iguana meat is a fairly common dish in Central America, where people eat it roasted or in stew.

Check out these photos taken in a market in the Nicaraguan capital of Managua.

You can buy them alive.

Or after they've been turned into a stew.

In fact, iguana meat is so popular that some countries, including Nicaragua, have placed restrictions on hunting the reptile for fear it could be wiped out.

But while supplementing their diet with iguanas might provide Nicaraguans with some much-needed protein, it’s not going to solve the current food shortage, which is expected to worsen over the coming months.

The US government’s Famine Early Warning Systems Network, or FEWS NET, said in mid-August that large areas of Guatemala, Nicaragua, Honduras and El Salvador would “experience a rapid deterioration in their food security in early 2015” due to this year’s poor harvests and rising food prices.

The Guatemalan government has already declared a state of emergency because of the devastating drought.

“Atypically high levels of humanitarian assistance, possibly the highest since Hurricane Mitch in 1998, will likely be required in order to avoid a food crisis,” FEWS NET said.

The WFP says it would need 70,000 metric tons of food to support 1.4 million people in the region for three months, covering only 56 percent of those currently in need.

At the moment they only have 12 million metric tons of food.

The situation is "critical," said Miguel Barreto, WFP’s regional director for Latin America and the Caribbean.

“We are at the doorsteps of a humanitarian crisis if we do not take action immediately."