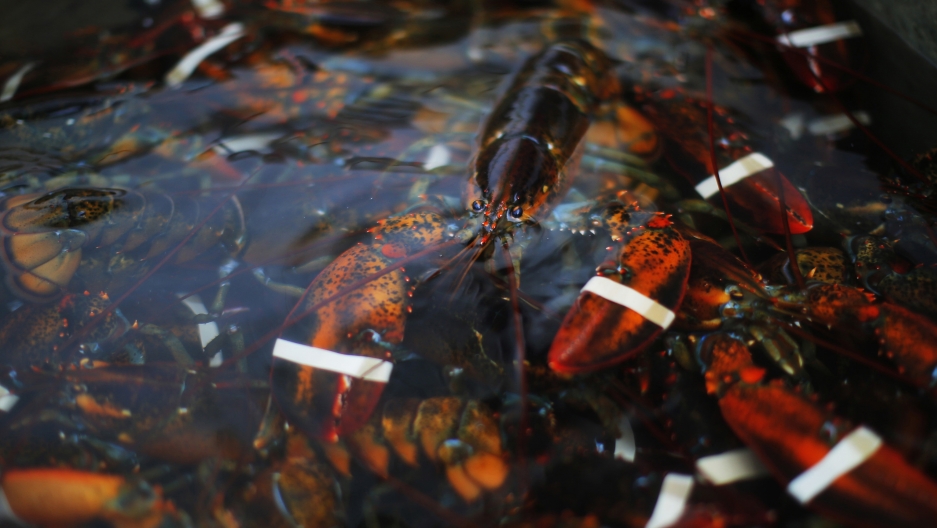 A freshly caught lobster sits in a holding tank before being delivered to a wholesaler in Portland, Maine.
Credit:

Last week, we brought you the story of one man’s quest to find the best lobster roll in Canada. And while North Americans are especially fond of their lobster — often mixed with mayo and spread on a roll — this particular crustacean is a global obsession served with plenty of variety.

For instance, China has recently had a huge increase in seafood imports. In 2012, American lobster sales to Chinese markets reached $28.3 million. The lobsters may be American, but Chinese chefs have their own ways of preparing them. Most of those ways are a far cry from the simple lobster roll — dishes will often contain ginger, hot peppers and chives, like a lobster stir-fry.

In Europe, the crustaceans share the same high status as they have in the States. In fact, the European lobster — scientifically known as homarus gammarus — is even more coveted for its notable deep blue color before it’s cooked.

A classic French dish is Lobster Thermidor, which is a mixture of egg yolks, brandy and the lobster’s meat stuffed back into its shell for serving. Allegedly, the dish was named by Napoleon for the month in which he first tasted it — Thermidor was the 11th month of the calendar briefly used during the French Revolution.

Lobsters are native to the Caribbean, too — spiny lobsters, that is. They look and taste quite different from what Americans generally eat. Spiny lobsters — often called “rock lobsters” (yes, like the song) — don’t have claws, so you can count on eating exclusively tail. Dishes with spiny lobster tail are often served with rum-jerk butter, a distinctly Caribbean twist on the American classic.

But let’s face it, regardless of the variety, lobsters aren’t one of nature’s more majestic creatures. If you’ve ever inspected one up close — or tapped on a tank at a grocery store, maybe — you would have noticed that they resemble big, aquatic cockroaches.

Of course, that doesn’t stop people from going crazy for them. The price of North American lobster has recently declined — due mainly to huge hauls by Northeastern fishermen saturating the market — and we continue to shell out for these critters in fine eateries across the continent.

So if the cost of lobster is at an all-time low, why do restaurants continually mark up the price? Because lobster means luxury, though it wasn’t always this way.

In colonial New England, lobsters were a throwaway food. They’d wash up in two-foot high piles on Massachusetts beaches, and the funny-looking bottom feeders were the dregs of a fisherman’s catch.

Lobsters were cheap and plentiful, so they were a natural meal for servants and prisoners. Allegedly, indentured servants were so sick of lobster that they demanded promises in their contracts that the crustacean wouldn’t be served more than once a week. Being forced to eat lobster everyday was considered “cruel and unusual punishment” — no joke.

So how did our humble lobster crawl up the gourmet ladder? It got put in a can.

With the rise of railroad transportation in the 1800s, Americans could suddenly get access to canned goods from across the country — lobster being the cheapest and most popular. Affordable train tickets also meant that inland Americans could travel to coastal cities, where restaurants began serving local lobster to tourists.

Soon prices surged, and by World War II, lobsters had the certified delicacy status that we know today. Nowadays, Canadian and American fishermen make an enviable living harvesting lobsters and shipping them to seafood-lovers around the world.

But I have a confession to make: Despite sharing all this global knowledge about lobsters, I’ve never actually eaten one. This is especially shocking seeing as I’m a born-and-bred New Englander.

Hear me out, though. I’ve been a vegetarian for over five years. And before that, I was just plain “weirded out” by them. Cracking open the shell; slurping out the insides — it all was too much to handle.

Can you blame me? After all, they’re just overpriced aquatic cockroaches.