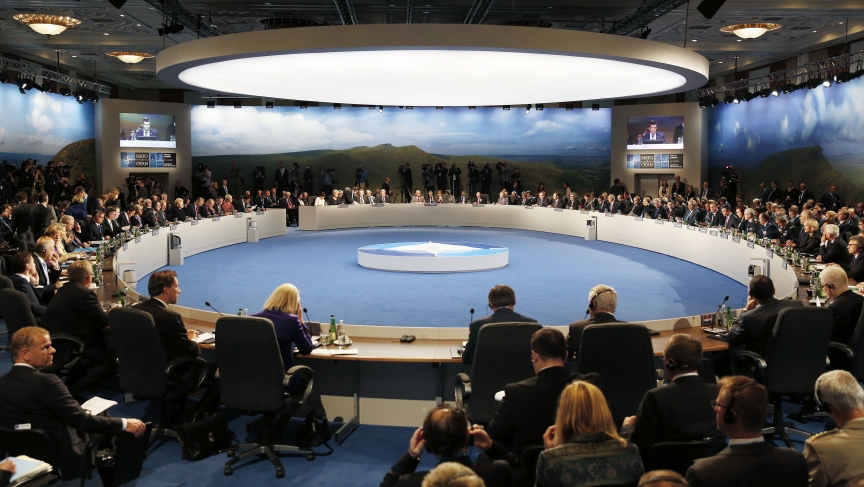 The ceasefire announced Friday for Ukraine may or may not lead to a lasting peace, but this much is certain: The Ukrainian conflict has galvanized the North Atlantic Treaty Organization into action.

At their meeting in Wales, President Obama and 27 other NATO leaders approved a new rapid reaction force as a way to deter Russia. The multinational force will consist of four to five thousand soldiers, with units from different countries rotating through.

“The objective of the force is to provide what is known as strategic reassurance to allies in eastern [Europe] in the event of aggression by Russia," says Julian Lindley-French, a senior fellow at the Institute of Statecraft in London.

"In a sense, this force will be the first responder to any act of aggression," Lindley-French told PRI's The World. It's a new force, but it reminds him of the old "tripwire" forces from the days of the Cold War. Those were in place to buy time for larger forces to join the battle. “In a sense, it’s old wine in new bottles.”

The rapid reaction force is vital to maintain NATO’s credibility, he says. “Let me be clear about this, it’s absolutely critical that NATO reassures all its allies that their defense is meaningful.”

Espeically, he says, after the group wasn't effective in deterring Russia from action in Ukraine and it declined to extend NATO membership to the Kiev government. Even as a ceasefire began in Ukraine on Friday, an Estonian military officer was kidnapped and taken to Russia in murky circumstances. Estonia is a member of NATO.

Lindley-French says NATO leaders need to pass what he calls "the Riga test" after the Latvian capital. Latvia is one of the easternmost outposts of NATO and the test would mean “the citizens of Riga could sleep safe and sound in their beds, safe in the knowledge that NATO’s collective defense is real and meaningful.”

The rapid reaction force has obvious limits — for one, 5,000 soldiers is comparatively small. And Lindley-French suspects it may not be needed in the short term.

“My sense of Moscow, to be blunt, is that if they effectively create a protectorate built around Donetsk and Luhansk [in eastern Ukraine] and they achieve a corridor between Russia and Crimea — my sense is that they’ve got what they want. The rest of Ukraine can be Europe’s problem.”