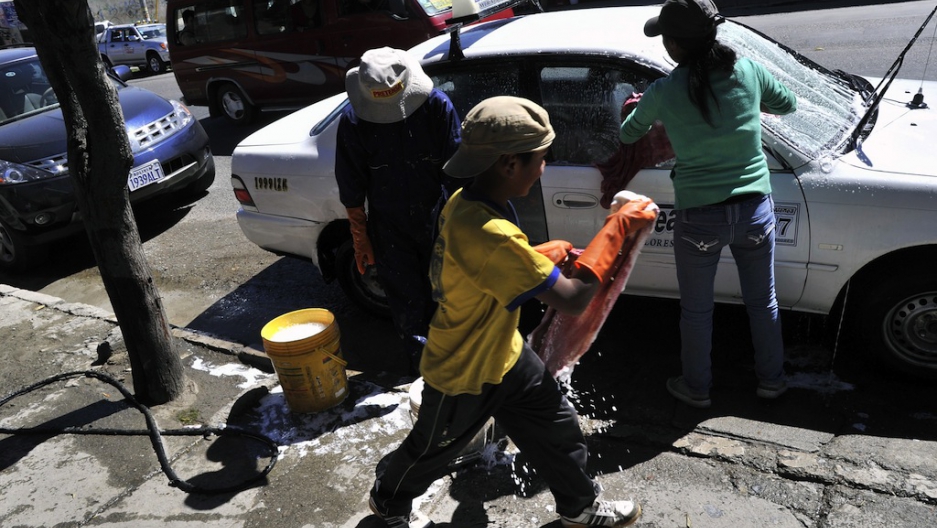 A boy helps his older siblings to wash a car in a street of La Paz on May 7, 2014. Hundreds of Bolivian children work as farmers in the fields, perform dangerous tasks in mines or trying to survive in cities of one of the poorest countries in South America where child labor, far from being prohibited, it is considered a way of developing "social conscience."
Credit: AIZAR RALDES
Share

NEW YORK — A controversial new law in Bolivia makes it the first country to legalize work by 10-year-olds. One justification offered by officials sounded awfully familiar: “Kids want to work.”

We’ve spent the last year investigating child labor in the United States, where children at age 12, and even younger, work for tobacco farmers like Paul Hornback, a Kentucky state senator.

“Children need to experience things,” Hornback said on The Daily Show with Jon Stewart last month. “When I was a 7-year-old, I was wanting to work.”

Hornback wasn’t the first person to try to justify child labor that way.

We’ve heard that argument in our work around the world — whether about children working on gold mines in Mali and Tanzania, children harvesting sugar cane in El Salvador, or child domestic workers in Morocco. Bolivia’s regressive new law was influenced by pressure from a union of child workers arguing they need to work to support their families.

The short answer is sometimes, yes. But that’s only part of the story.

Many children feel compelled to work because their families are struggling to make ends meet. Twelve-year-old “Miguel,” a tobacco worker in North Carolina, said he wanted to start working on a tobacco farm “because I need money.”

Natalie, an 18-year-old farm worker in North Carolina, said she started working on a tobacco farm at 12 because “I saw what my mom was going through, how tired she was, and… wanted to help.” Most children we interviewed for our tobacco farming report started working to earn money for their basic needs: family bills, clothes, school supplies. They wanted to work because their families were living in extreme poverty, and their parents couldn’t get by on minimum wage jobs.

Poverty and child labor create a vicious cycle. Poverty drives children to work, often at the expense of their education, which limits their opportunities to secure better paying jobs when they grow up. Studies show that people who enter the workforce at an early age typically end up with less education and lower earnings, and will be more likely to send their own children to work.

While child labor may seem like a short-term solution in times of hardship, it actually perpetuates poverty.

Children may also “want to work” because they don’t recognize their jobs are harmful to their health and development. Child tobacco workers in the US are exposed to nicotine and toxic pesticides, and child miners in Mali and Tanzania can suffer great harm from the use mercury to extract gold from ore. But most of the children we interviewed — and their parents — had no idea how harmful this toxic exposure could be over time.

Evidence shows that child labor harms child health, impedes education, and perpetuates poverty. Given a real choice, nearly all the child workers Human Rights Watch has interviewed in many places around the world said they would rather be in school.

The International Labor Organization says that 14 is the earliest children should begin working (and age 15 in developed countries). Ignoring these standards because children want to help their families is doing these children a disservice. Perversely, Bolivia’s new law may increase child labor, by sending parents the message that it’s okay to send their 10-year-olds to work.

There are better ways to protect young children than legalizing their work. The International Labor Organization reported last year that globally, child labor rates had dropped by 30 percent since 2000. The countries with the most success have expanded access to education and established and enforced protective child labor laws. They have also tried to address the economic desperation that often drives parents to send their children to work.

Bolivia’s new law sets a bad example. Governments have responsibilities to enact laws that protect children from child labor, not facilitate it. Arguing that children want to work is a poor excuse.