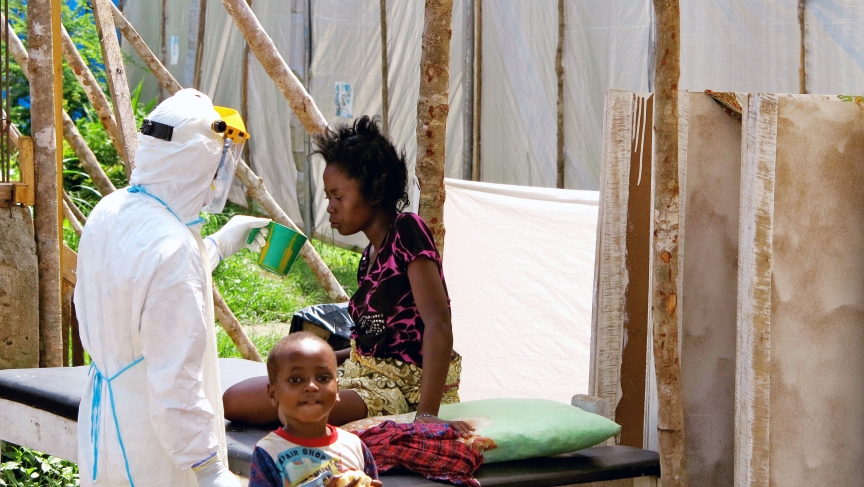 A health worker, wearing head-to-toe protective gear, offers water to a woman with Ebola at a treatment center for infected persons at Kenema Government Hospital in Kenema, Sierra Leone.
Credit:

People treating Ebola patients in West Africa have been asking for more help to contain the outbreak. Yet only three countries — China, Cuba and Uganda — have sent in medical teams.

That's a stark contrast to what usually happens after disasters like hurricanes and floods, when many countries dispatch emergency responders to help. That difference has Dr. Joanne Liu, the president of Doctors Without Borders, furious about the feeble response from the international community.

"Six months into the worst Ebola epidemic in history, the world is losing the battle to contain it," says Liu. Her group, commonly known by its French initials MSF, has been on the ground in West Africa since the outbreak began in March.

The World Health Organization said last month that the outbreak constituted a "public health emergency of international concern." But despite that call, Liu says, "leaders are failing to come to grips with this international threat" and "states have essentially joined the global coalition of inaction."

"They're so understaffed that they're providing the most basic care possible," Fink says. "Everybody who's been involved in caring for patients with Ebola feels that if they could do a little more for them, just basic supportive care, they could save more lives."

That improved care could produce a domino effect, Fink says. "Those people become ambassadors back to their communities. They can show that they survived and encourage others to get treated."

But getting the needed health care workers and aid to West Africa is a problem. The current system is voluntary. The World Health Organization (WHO) relies on UN member states and other organizations to send in medical teams.

The West African countries dealing with Ebola have little to no medical infrastructure. "In some of the hospitals at the center of the outbreak when it began in Guinea, doctors said there was no running water!" Fink says. Health care workers fear for their own lives, and stories of nurses, doctors and aid workers contracting Ebola have only fueled the concern.

The WHO has said that this Ebola outbreak could cause 20,000 deaths if more steps aren't taken to contain it, and Fink says she's heard much higher estimates.

"There are a lot of people pushing the WHO to do more, and they're pushing back saying it's not their role, that they are a technical agency, there to give advice," Fink notes. "People are saying that's not enough, that the WHO's own constitution gives the organization a leading role in an outbreak response."

Fink says the WHO has the elements to take charge of containing the outbreak. "It does have a department of emergencies and they rapidly deploy people and they did send people to West Africa right away," she explains, but what is missing is the command responsibility.

"When I talk to people in the field, they say that the meetings in West Africa are informational, without an overview of what's happening and what needs to happen to bring the outbreak under control." The WHO, says Fink, simply doesn't seeing taking charge as its role.

"As a body of the UN, the WHO has an internationally agreed-upon mandate. Nearly 200 countries have given it the legal authoritity to lead in the case of international emergencies and global health issues. They have a mandate that a charity doesn't have."

The rate of infection among health care workers fighting Ebola in West Africa may well force a change. As of August 25, the WHO said 240 health care workers had developed the disease in Guinea, Liberia, Nigeria, and Sierra Leone, and more than 120 had died. Ebola has also spread to a fifth country, Senegal.