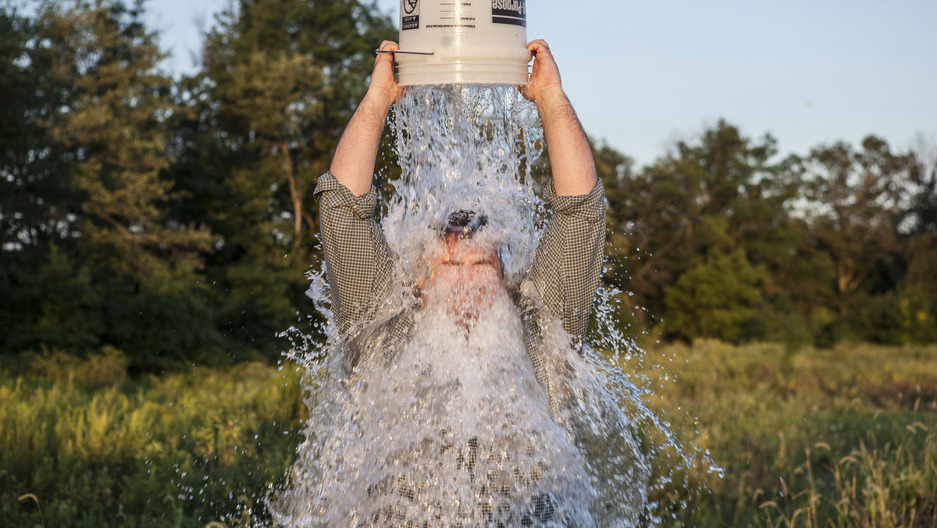 Social media manager Anthony Quintano completes the ALS Ice Bucket Challenge, the fundraising campaign that's gone viral around the world and prompted supporters of other causes to create their own versions of the challenge.
Credit:

The ALS Ice Bucket Challenge has shown the willingness of people around the world to do odd things on camera for a good cause. And activists around the world are noticing ... and learning from it.

In the ALS Challenge, people film themselves dumping a bucket of ice water on their head. They then nominate others to do the same within a certain amount of time or else donate to a charitable organization.

The aim was to raise awareness and research money for ALS, amyotrophic lateral sclerosis, a rare neurodegenerative disease. It has been a spectacular success, raising over $100 million for ALS so far this year, compared to less than $3 million at this point last year.

From Nepal to Venezuela, activists have now created spin-off videos that draw awareness to other issues around the world. Here are eight countries where the ice bucket challenge has been repurposed.

Afghanistan has been marred by political deadlock since the presidential election on July 7. There's still no accepted winner, so a few citizens have challenged politicians via an Ice Bucket Challenge-like video to find a consensus and move the country forward. The caption of the video on Facebook explains the idea:

We are feed [sic] up with the current political uncertainty of our country. We ask our leaders to accept the results of the second round while keeping it cool. We give this challenge to all Afghans and encourage them to make the same demand!

The “Lather Against Ebola” campaign invites people to pour soapy water on their heads to educate people about the transmission of Ebola. The virus has infected more than 3,000 people and killed more than 1,500 in Sierra Leone, Guinea, Liberia, Nigeria and Senegal. The hashtag for finding videos online is #MoussercontrerEbola. Here's Edith Brou of Abidjan, Côte d'Ivoire, taking part:

Not all videos are for medical causes. The Rubble Bucket Challenge is meant to highlight the conditions faced by Palestinian children due to Israel's invasion of Gaza. In the following video, the participant explains:

We looked for water however the use of water is more important [here] than to empty it over our heads [..] We do not ask for material aids, we asked for solidarity positions.

In Hyderabad, India, 38-year-old journalist Manju Latha gave the challenge a local twist: Gone with the ice and in with the rice.

But during the Rice Bucket Challenge, meant to fight hunger in the region, there's no dumping of rice over your head. You simply pick up a bowl of rice and hand it to someone in need. Participants are asked to then post photos to Facebook under the #ricebucketchallenge hashtag. Here's a video of the Rice Bucket version of the challenge:

Water shortages are an unwelcome summer routine in Lebanon, so a group of Lebanese made a lighter video of themselves “pouring” water they don't have on their heads:

Sometimes water isn't the only resource a country lacks. To address the need for many staple foods in Nepal, Global Voices author Sanjib Chaudhary reports that the #FillTheBucket initiative is gaining steam. He explains:

The person taking the challenge needs to buy a bucket with lid and a mug and fill the bucket with essentials ranging from rice, pulse to medicines and sanitary pads. The bucket goes to the recent landslide and flood victims in Nepal.

This video from Aakar Anil explains how the challenge works:

The month of August was filled with protests over the killing of 18-year-old Michael Brown in Ferguson, Missouri, and other instances of police brutality directed at black men. To highlight the need to reduce gun violence, actor Orlando Jones poured a bucket of bullets over his head. He explains the reason for his gesture:

the ALS Association is a completely worthy and incredible organization. They've raised millions of dollars, which is kind of amazing [...] I wanted to do what ALS did, co-opt a viral thing and make it my own, to talk about the insanity happening in Ferguson and just around the world. My parents are like, “It's the '60s again." Those shell casings in my video represent the people who paid the ultimate cost for the freedoms we have today. I couldn't find enough bullets to dump on myself to illustrate the number of people who gave their lives for a very important ideal.

Many ice bucket challenge critics oppose the campaign because it wastes clean water. In Venezuela, Global Voices author Laura Vidal signals that “somebody from Maracaibo city (a particularly hot city in the west of Venezuela) made a video to denounce the lack of water in the region. The video has had over 38k visits.”

There are most certainly other spin-off videos from other countries for various causes worth mentioning. If you know of video campaigns we've missed, let us know in the comments section or on our Facebook page.

This story by Lova Rakotomalala was originally published on our partner Global Voices Online, a community of bloggers from around the world.