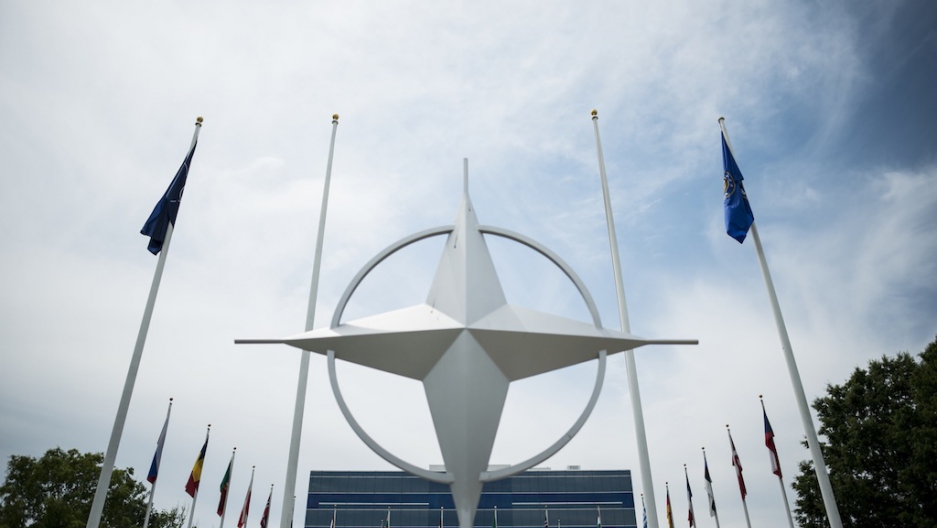 With Sunni Islamic State militants announcing their second beheading of a US journalist and threatening that a British hostage is next, the pressure has ratcheted closer to breaking point for Western countries to act — even if it means doing something unthinkable.

The emergence of the Islamic State (IS, also known as ISIS or ISIL) in Syria and Iraq is making mincemeat of formerly inviolable categories of international relations: Yesterday’s terrorist could well be tomorrow’s ally.

US Secretary of State John Kerry has called for “the broadest possible coalition of nations” to keep the “cancer of ISIS” from spreading to other countries.

Now global friends, frenemies, and some outright enemies are throwing their weight behind a mission still being defined, sometimes in support of non-state fighters blamed for violent insurgencies in Europe and elsewhere. It’s far from certain the adversaries can overcome conflicting interests and mutual antipathy, even in the face of such a grave common threat.

“ISIS’ abhorrent tactics are uniting and rallying neighbors with traditionally conflicting interests to support Iraq’s new government. And over time, this coalition can begin to address the underlying factors that fuel ISIS and other terrorist organizations with like-minded agendas,” Kerry wrote in a New York Times op-ed published Saturday.

The IS threat has to compete with the Ukraine crisis for top billing at the NATO summit in Wales Thursday and Friday.

Afterward, Kerry and US Defense Secretary Chuck Hagel will head to the Middle East, where they will try to convince regional powers to board the anti-IS bandwagon.

Here are some groups the Obama administration is trying to shoehorn into a workable alliance. A moment of silence for killed service members in Afghanistan at the start of a meeting during the NATO summit at the Celtic Manor Hotel in Newport, South Wales, on Thursday. Alain Jocard/AFP/Getty Images

Many NATO member countries have already joined the United States in aiding groups in Iraq, including by sending weapons to the Iraqi Kurdish fighters, the peshmerga.

“In addition to support from the US, and the central government of Iraq in Baghdad, seven additional nations — Albania, Canada, Croatia, Denmark, Italy, France, and the United Kingdom — have committed to helping provide Kurdish forces urgently needed arms and equipment,” Hagel said last week.

This week Germany added itself to the list, announcing it will provide over $90 million worth of weapons and munitions to the Kurdish forces in northern Iraq.

This is a departure from a pillar of German foreign policy since the end of World War II of not supplying weapons to war zones.

Germany has some reservations. It’s had years of run-ins with the Kurdistan Workers Party, or PKK, a group that the US, the European Union and others designate as a terrorist organization. In 1993 the PKK attacked numerous Turkish installations in Germany, including the Turkish Consulate in Munich, where the group took hostages and demanded that the German government increase support for Kurdish rights.

But the PKK is deeply involved in the fight against IS; in the struggle to rescue a beleaguered minority group, the Yazidis, from Sinjar Mountain in northern Iraq last month, the Kurdish group played the hero role.

More from GlobalPost: ‘If it wasn’t for the Kurdish fighters, we would have died up there’

Chancellor Angela Merkel has insisted Germany will arm the other guys, the peshmerga, and definitely not the PKK.

The UK is committed, especially after the knife-wielding militant who appeared in the videotaped killings of US journalists Steven Sotloff and James Foley revealed his British accent.

Britain is already supplying humanitarian aid to besieged minorities and military aid to Kurds fighting IS in Iraq. Prime Minister David Cameron says the government’s prepared to “act immediately” if the security of the country is threatened.

Cameron wants to force suspected jihadists to attend “de-radicalization programs” upon return from Iraq or Syria, and to relocate to “exclusion zones,” where such terror suspects would not be allowed to travel.

Turkey, meanwhile, another NATO member, is being asked to step up to the plate.

But that includes letting its allies arm Kurds, a group whose separatist tendencies have caused a great deal of trouble in Ankara.

Washington would also like Turkey to take a firmer stand against extremist groups. Given its geography, Turkey would also be key to any effort to aid Syria’s opposition.

To be clear, NATO itself has not received a request for help from the Iraqi government.

If it does, “that would be considered seriously by NATO allies," NATO Secretary-General Anders Fogh Rasmussen said, according to the Associated Press.

More from GlobalPost: Should the US team up with Assad against the Islamic State in Syria Middle East allies are mad about US inaction in the Syrian civil war. Dimitar Dilkoff/AFP/Getty Images

Kerry and Hagel face big challenges in the Middle East, where allies are smarting from perceived slights by Washington and may be unwilling to commit to a US-led effort to roll back IS. But the countries of the Gulf Cooperation Council — all Arab Persian Gulf countries with the exception of Iraq — will be key to any anti-IS alliance.

Andrew Tabler, a Syria expert at the Washington Institute on Near East Policy, told GlobalPost that Obama’s failure to act last year when Syrian President Bashar al-Assad’s forces used chemical weapons against their own citizens created a powerful deterrent to cooperation in the Middle East.

Tabler now says the top US officials will have to overcome the Syrian hurdle on their visit, the Christian Science Monitor reported last Friday.

Saudi Arabia is one of the biggest players in the region, and a main supporter of Sunni Islam countries. But it has been rocked by the unrest in the region unleashed by the Arab Spring. By most accounts, it’s especially angry at Qatar, which it considers to be too actively involved with Islamist groups like the Muslim Brotherhood.

The two countries had a pretty deep rift this spring, when Saudi Arabia threatened to blockade Qatar by land and sea if it did not cut its ties to organizations that the Saudis disapproved of — including the Brookings Institution’s Doha Center.

Not exactly a recipe for smooth cooperation.

Other regional players are also expected to be tapped for help. Jordan may be asked to play an active role in any military alliance. Lebanon will have to be kept a bit on the sidelines, the AP writes, given the influence of Hezbollah in the country and its active involvement in the Syrian civil war on behalf of the Assad regime. Largely Shia Iran has been a mainstay of Syria’s embattled leader, who belongs to the Allawite sect of Shia Islam.

Washington and Tehran have been at odds for decades. Even so, this wouldn’t be the first time US-led operations helped wipe out Iran’s sworn enemies like the Taliban and Saddam Hussein.

And now Obama and other world leaders are convinced that worse things exist than Iran, which could become an important piece of any alliance to keep IS in check.

But they would not be the strangest bedfellows …

4. The real outliers: Would Washington team up with al-Nusra? Al-Nusra Front fighters go to battle against Syrian regime forces on April 4, 2013 in the on the southern outskirts of Aleppo. Guillaume Briquet/AFP/Getty Images

The IS threat is making even the unthinkable a viable option.

Former US Ambassador to Iraq Ryan Crocker told The Wall Street Journal that he could foresee a role for Jabhat al-Nusra, a Syrian offshoot of Al Qaeda, in the fight against IS.

Al-Nusra and the Islamic State group are rivals in the quest to set up a far-reaching Islamic caliphate, and are competing for recruits in the region and from Western countries.

Al-Nusra, Crocker pointed out, maintains communication with Qatar, a US ally, and last week released an American journalist it had been holding, Peter Theo Curtis.

This could signal a willingness to engage as a player in the front against IS, he said.

Crocker says the US government faces a “a very interesting decision” on whether to include the Al Qaeda affiliate as part of its broad coalition.

Ultimately, the US and its allies will have to deal with whatever comes next.

As journalist and author Tom Engelhardt pointed out this week, the record of US intervention has not exactly been stellar:

“[IS] may be our worst nightmare [thus far], but they are also our legacy,” he wrote in an essay that appeared in Huffington Post. “In fact, just about everything done in the war on terror has facilitated their rise. … We do have reasonable evidence from the past 13 years of what an escalating American military intervention is likely to do: not whatever it is that Washington wants it to do.”

Let’s not do it again, he warns.

More from GlobalPost: Should the US team up with Assad against the Islamic State in Syria?