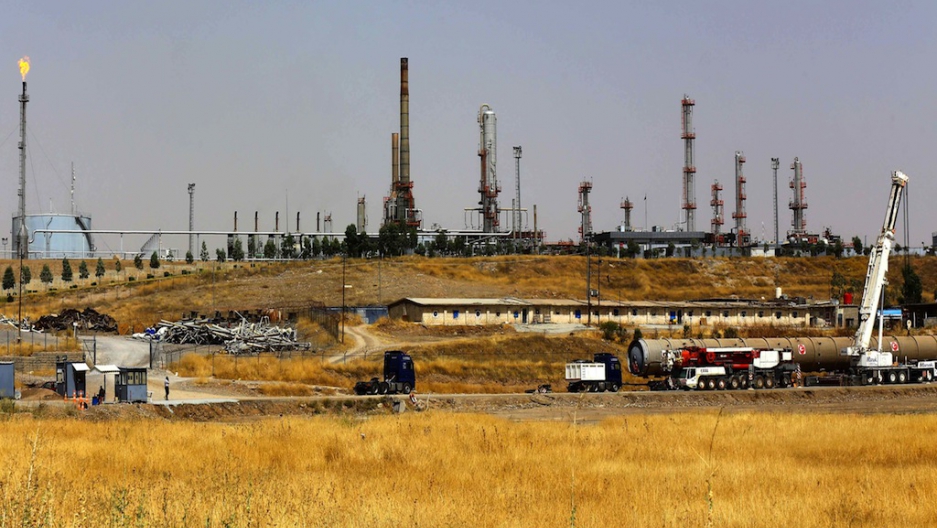 A view of the Kawergosk Refinery, some 20 kilometers east of Erbil, the capital of the semi-autonomous Kurdish region of northern Iraq.
Credit: Safin Hamed
Share

ERBIL, Iraq — In an old photo, Richard Nabb in full camouflage uniform stands next to Masoud Barzani, now the president of Iraqi Kurdistan.

In the early 1990s, US Army Col. Nabb was head liaison officer between the Kurds and the US military. Today he is a consultant for HKN Energy, an oil exploration company owned by Ross Perot, Jr.

Nabb and other former Army officers use their contacts in the region to promote the interests of Western oil companies in what has become the Wild West of Kurdistan. More than 50 foreign oil companies now hustle to develop oil and gas. The ex-military men have become strong advocates for the Kurdish cause, calling for expanding US airstrikes and providing more sophisticated weapons to Kurdish peshmerga forces. They also back what they say may well emerge as an independent, pro-American, pro-business Kurdish state.

“I personally believe that the former Iraq is gone and will not return," retired Lt. Gen. Jay Garner said recently. Garner briefly ran the Office for Reconstruction and Humanitarian Assistance for Iraq in 2003 and later sat on the board of directors of a Canadian oil company doing business with the Kurdish Regional Government.

Garner said if the Shia, Sunni and Kurdish regions of Iraq can't agree on a new, confederated system, “I believe that we should support an independent Kurdistan.”

A gaggle of former US military and diplomatic officials now trade on their connections to benefit themselves and Western businesses:

* General James L. Jones, former US Marine commander, served on the board of directors of Chevron and now heads the United States-Kurdistan Business Council.

* Zalmay Khalizad, a former US ambassador to Iraq, served as an advisor to a Norwegian oil company drilling in the Kurdish Region.

* Col. Harry Schute, Jr. served in Kurdistan during the Iraq War, later set up a security firm in Erbil and currently works as a security consultant to the Kurdish Regional Government.

"We wanted, quite frankly, to develop American business interests here that would trump what we all believed was bad US policy," he said.

Antonia Juhasz, an oil industry analyst and author of "The Tyranny of Oil," said in an email interview that retired military officers taking oil industry jobs is yet another example of the military-industrial complex of which President Dwight Eisenhower warned.

While the oil industry had more clout during the George W. Bush years, "Its influence is certainly exercised on this administration," she said. "This war is certainly being fought with oil interests in mind."

Nabb had a distinguished 31-year career as an Army officer, having served in northern Iraq during the 1991 Gulf War. The highlight of his career, he said, came after the US created a no-fly zone over northern Iraq to protect the Kurds. The US effectively redrew Iraq's borders to create a separate Kurdish enclave.

Among other jobs, Nabb met with Saddam Hussein's generals, dressed in matching berets and sporting Saddam mustaches, and told them the new borders of their country.

"Yeah, that was my job," he said with a big smile.

Shortly after the end of the Gulf War, Nabb retired from the Army. He credited Jay Garner for encouraging him to get a job in the oil industry and return to Erbil. Nabb and his fellow officers knew nothing about oil exploration, but they knew the Kurdish leadership well, an arrangement that was to become mutually beneficial.

The former officers became strong supporters of an independent Kurdish oil policy in which the regional government allows foreign companies to explore, develop and pump oil within its territory. The oil ministry in Baghdad strongly objects, maintaining that it has the sole power to make such agreements.

The Kurds "should have control over their own oil," according to Nabb, "as long as they share it according to the Iraq Constitution."

There's so much oil, he added, "You can make a Louisiana or Texas up here."

And the potential oil company profits are huge.

Kurdistan sits on an estimated 45 billion barrels of oil, the ninth largest oil reserves in the world, according to Kurdish officials. It also has some 6 trillion cubic meters of natural gas. Long term, the regional government hopes to replace Russia as a major supplier of oil and gas to Europe, which could shift the strategic balance of power between the US and Russia.

Over the past 10 years it has defied Baghdad, developed its own oil fields, and sent truckloads of crude for sale to Iran and Turkey. The Kurds’ apparent violation of US sanctions against trading with Iran was never thoroughly investigated by the US, in deference to overall US-Kurdish relations.

Then in December last year, the regional government opened an oil pipeline to the port of Ceyhan, Turkey. It currently exports about 120,000 barrels a day, which Kurdish authorities want to increase to 1 million by 2015. Even that will still be far less than the 3.15 million barrels pumped in the rest of Iraq.

The oil ministry in Baghdad only signs service agreements under which the oil companies receive a fee for every barrel produced. The multinationals were never happy with those agreements because of the relatively low profit margin.

The Kurdish Regional Government, on the other hand, lured oil corporations by signing production sharing agreements (PSAs). Oil companies front the money for exploration, and if the oil gushes, they receive about 18 percent ownership. Nabb said oil corporations prefer PSAs although they involve more risk.

"You get good money if you hit," he said.

Asked if such contracts exploit Kurds in the long run, he said, "It takes a lot of money to make money in oil." Referring to the oil companies, he continued, "If they get a dry hole, they're out. If they hit it's a win for the Kurds, too. The Kurds get 80 percent of what's produced."

But if the oil field is jointly developed by a number of companies, the Kurdish ownership could drop to 25 percent or less.

Foreign companies investing in the Kurdish region, including oil corporations, pay no taxes for the first 10 years of operation and are able to import items used in business without customs taxes, terms that Nabb called "very generous."

As a result over the past few years, Chevron and other major US companies left Baghdad and moved to Erbil.

"Exxon-Mobil walked away from their contracts down there to come up here because you have a lot more potential gain on the upside," explained Nabb.

But oil company plans were scrambled when the Islamic State, which has itself amassed a significant oil business, attacked northern Iraq in June. By August many had evacuated staff fearing an IS assault on Kurdistan and general instability in the region

The Iraqi army in northern Iraq dissolved in the face of the IS offensive. The peshmerga marched into territory disputed with Baghdad, including the city of Kirkuk. The Kurdish Regional Government expanded its borders by 40 percent. Then IS attacked the peshmerga in August, forcing them to retreat from several important cities.

Most significantly, however, the peshmerga took over and still controls the city of Kirkuk, home to the oldest oil fields in the Arab world. On July 11, the peshmerga told the Arab staff to go home, and Kurdish technicians and guards took over.

Assam Jihad, oil ministry spokesman in Baghdad, said the seizure was a “constitutional breach” and “violation of Iraq’s sovereignty.”

The regional government has long claimed Kirkuk as its capital and shows no signs of returning it to Iraq. The main Kirkuk pipeline hasn't operated since March due to IS sabotage so, for now, the vast majority of oil fields are not producing.

The one field still operating ships 25,000 barrels per day north to the Kurdish pipeline and on to Turkey. Baghdad worries that the current shipments are one more step in a permanent Kurdish appropriation of Iraqi oil and creation of an independent state.

Western oil companies also worry about the newly expanded Kurdistan. They would prefer to operate in Kurdistan while continuing their operations in Iraq, which has far more oil reserves.

"Supporting Kurdistan independence would threaten this much larger and currently stable oil supply," according to analyst Juhasz. "It’s ultimately not worth it to them or the US."

But Kurdish officials say that once the Islamic State is expelled from Kurdish areas, independence is back on the table. "We can't wait another 10 years," said Hemen Hawrami, head of foreign relations for the ruling Kurdish Democratic Party.

Nabb argued that the Kurds "don't need independence right now." He conceded however, that the current crisis has intensified nationalist sentiment.

"The people want a Kurdistan," he said. "They want it for sure."

And if a pro-American, pro-business Kurdistan emerges, the former US military men will certainly lend their support.

Reese Erlich is a special correspondent for The GroundTruth Project. His latest book is "Inside Syria: the Backstory of their Civil War and What the World Can Expect," published by Prometheus Books.