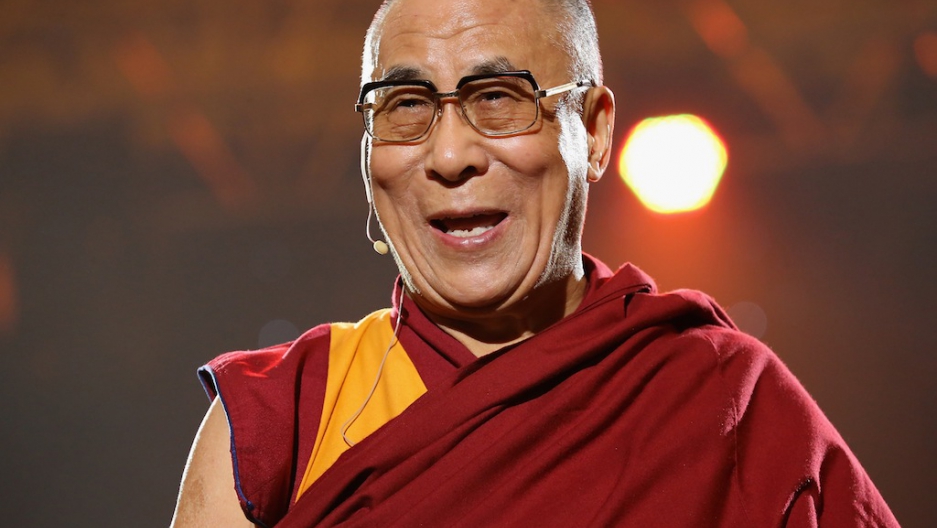 The Dalai Lama speaks onstage at the One World Concert at Syracuse University on Oct 9, 2012 in Syracuse, New York. On Oct. 15, the Dalai Lama participated in panel discussions at the Dalai Lama Center for Ethics and Transformative Values at MIT in Cambridge, MA.
Credit: Neilson Barnard
Share

Look at that face. You're suddenly a bit more serene, a bit more contented than you were a minute ago, aren't you? Maybe you're remembering the year — was it 2002? 2003? — when you gave every single one of your friends and family a copy of "The Art of Happiness" for Christmas.

On the other hand, if you're the president, prime minister, or foreign secretary of any country in the world, then this face is giving you serious angina right now.

We learned on Sept. 4 that South Africa had denied a visa request by the Dalai Lama, the head of Tibetan Buddhism and symbol of Tibetan freedom, who'd been planning to attend the 14th world summit of Nobel peace laureats in Cape Town. (He won the prize in 1989.) It's widely assumed — and the Dalai Lama's representative to South Africa claimed — that the decision had to do with South Africa's economic ties with China, a country that considers the Dalai Lama a separatist.

More from GlobalPost: A comprehensive 54-step guide to how the US ruined Iraq

From reading headlines around the world today, you'd think this was a major event in geopolitics.

It's not. The Dalai Lama is losing friends all over the place as the world undergoes a geopolitical realignment.

The Dalai Lama used to be the guy everyone wanted at their party. But since China's emergence as an economic superpower, he's become an awkward guest to invite.

Around the world, governments are limiting their contact with him — in some cases because of direct pressure by China, and in other cases, because of the chilling effect that pressure creates.

So who's shutting the Dalai Lama out?

First of all, South Africa's most recent visa rejection is nothing new. It's the third time in five years that the African nation has refused to allow him into the country out of deference to Beijing. No surprise, then, that another close friend to China — Russia — has also shut the Dalai Lama out repeatedly.

But there are also some very surprising nations cowing to China.

Take the United Kingdom. You'd think the British government would be too proud to take orders from East Asia. You'd be right if you're thinking about May 2013, when Prime Minister David Cameron met with the Dalai Lama, even after Beijing warned him not to. But then, China cut off diplomatic relations, and Cameron's administration spent a year working to get back in Beijing's good graces. Part of the healing involved William Hague, Britain's foreign secretary, promising that the British government was "fully aware of the sensitivity of Tibet-related issues" and would "properly handle such issues on the basis of respecting China's concerns."

An almost identical scenario played out in 2010 between China and Denmark, and, until South Africa's visa decision, the most recent diplomatic row over the Dalai Lama took place in another Scandanvian country beloved for its openness, tolerance, and social welfare: Norway.

That's right. When the Dalai Lama visited Norway in May 2014, government officials allowed him to enter the country but refused to meet with him.

The reason was fallout after the imprisoned Chinese dissident Liu Xiaobo won the Nobel Peace Price in 2010. You see, the peace prize committee that selects the winner is appointed by Norway’s parliament, and even though it has no official connection to the Norwegian government, China responded to the award by imposing trade restrictions on Norwegian products and limiting cultural and diplomatic exchanges.

Norway wasn't going to make the same mistake twice. So when the Dalai Lama wanted to visit in 2014, they let him in, but stayed far away from him.

Norway’s Prime Minister, Erna Solberg, openly acknowledged that diplomatic relations with China were the reason her administration kept the Dalai Lama away. “It’s not as if China said that we cannot meet the Dalai Lama,” she told reporters. “We just know that if we do so, we’re going to remain in the freezer for even longer.”

If all this economic pressure doesn't succeed in destroying the Dalai Lama's global influence, China's meddling in the Tibetan succession process itself might do the trick. The current Dalai Lama, whose religious name is Tenzin Gyatso, is the 14th reincarnation. He was identified in 1937, and Beijing has announced that it has the authority to discover/appoint the 15th Dalai Lama after his death.

More from GlobalPost: Targeted strikes have worked in Somalia. But are they a lesson for Syria?