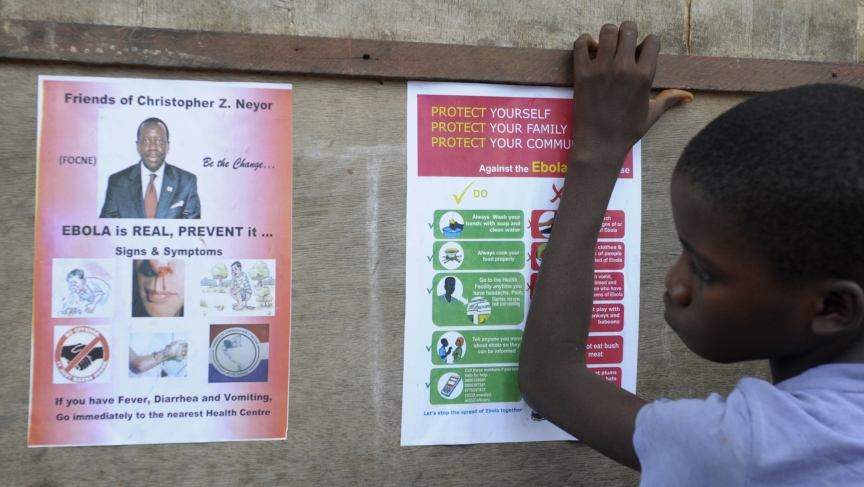 A boy looks at posters issued by the Liberian government warning against Ebola at Duwala market in Monrovia.
Credit:

Liberia’s airwaves are filled with information about the Ebola crisis, but some of the most thorough news has come from an unlikely source — hip-hop radio. One of Monrovia’s best-loved stations, Hott FM, has taken on a mission to spread awareness of the disease.

“Being one of the most listened to stations among the youth and young adults, we took it as our responsibility to lead the fight in disseminating the information out to our people,” explains DJ Blue, Hott FM's general manager and night-time DJ.

Between playing the hottest tracks from local artists, DJ Blue and the station’s other disc jockeys keep listeners up-to-date on all things Ebola — quarantine centers, new cases that have been discovered and preventative measures.

And the message goes beyond DJ banter and news bulletins. Hott FM — with help from UNICEF Liberia — has co-produced a song called “Ebola is Real.” The track is in the HipCo style, a Liberian genre of hip-hop. The lyrics feature straightforward, practical Ebola advice with a danceable beat.

The song — which was made by local artists F.A., Soul Fresh, and DenG — has become a huge hit, DJ Blue says: “It’s played on every last media outlet in the country.”

And it’s just one of many Ebola-themed songs that have taken over Liberian airwaves. The electro-infused "Ebola in Town" and the smooth R&B track "State of Emergency" offer the same advice and have also gotten widespread radio airplay.

Liberia is a young country — almost half of its population is under 18 — so it seems like a stroke of genius to broadcast Ebola news on pop radio. “Wherever you see the Hott FM brand, you know it’s the young and the hip people,” DJ Blue says. “We use that influence to go out there and get the message across.

“Even with all the things about Ebola going around, people still want to relax. People still want to listen to music,” he says. “Even during the … so-called ‘partying time’ on the station, we still get that message across. All our programs right now have some message of this awareness embedded into [them.]”

Spreading information is central to stopping Ebola, DJ Blue says. Despite the prevalence of the disease, many in Liberia have fallen victim to widespread myths and misconceptions about Ebola.

“Unfortunately, the illiteracy rate in our country is up there," he says. "We try to get our people to know that this disease is real and is killing."