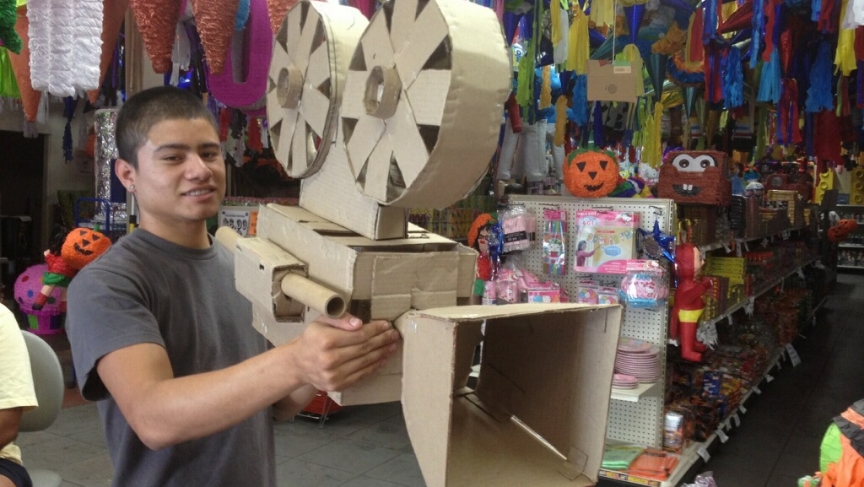 Juan Luis Garcia, a photographer and graphic designer, shows off the camera piñata he used to shoot promotional posters for the 20th San Diego Latino Film Festival in 2013.
Credit:

Census reports keep showing a growing Latino population in the United States, but you might not be able to tell that from looking at the country's art scene.

But things seem to be looking up. In a recent article for ARTNews, MIranda notes that museums in the United States might finally be taking Latin American and Latino art seriously. "The fall of 2017," she writes, "will see the launch of 46 exhibitions and events around Southern California devoted to artists and designers of Latin American descent."

This growing attention to Latino and Latin American art is partly due to more Latinos holding key positions in the industry, like Rita Gonzalez, a curator at LACMA — the Los Angeles County Museum of Art. Gonzalez curated the critically-acclaimed exhibition Phantom Sightings, the largest Chicano art exhibit ever presented at the museum.

We asked Miranda to give us a rundown of some artists we should be looking out for. She said it was like asking her to choose a favorite child, but she humored us and gave us these recommendations:

Miranda saw the work of this Colombian artist for the first time at Steve Turner Contemporary, a gallery in Los Angeles, and immediately recommended the show to her Instagram and Twitter followers.

“He creates this absolutely phantasmagoric collages related to the culture of the drug trade, specifically the types of words that the drug trade has sort of made common in our society, like the nicknames, like ‘El Chapo’”, she explains. “The drug war is such a big part of who we are politically as a culture, and he’s covering it from the other side. I want to see his stuff in a museum here in L.A. soon."

Miranda is “consistently enthralled” by the work of this L.A.-based artist: “She once created a video game out of a [Jorge Luis] Borges short story that to this day remains one of the most wrenching video games I’ve ever played in my life.” Bookchin has also done video installations, including one about race that Miranda says museums should show after the recent fatal shooting of Michael Brown, an unarmed black teenager, in Ferguson, Missouri. You can see a sample clip from that video installation here.

This Tijuana native is not just an interesting artist, Miranda says, “he’s an interesting thinker, and I think that’s really important. He told me once: ‘I never had to learn English, I just grew up speaking it because if you live on the border, American culture is your culture and Mexican culture is your culture.’ I think he’s one of those people who is perfectly positioned to sort of ride that divide of cultures, he gets it. He’s got one foot in each.”

This article is based on an interview from PRI's podcast, Radio Ambulante: Unscripted with Daniel Alarcón.