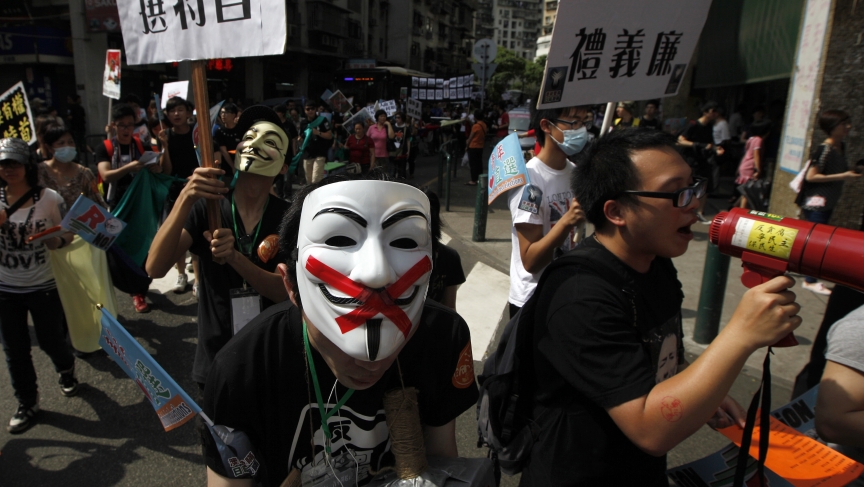 Macau will elect its chief executive on Aug. 31 — but the only candidate is Fernando Chui Sai-on, the incumbent, and the only voters are the 400 members of a committee made up of social and political leaders as well as representatives of the central government in Beijing. The rest of Macau's 270,000 eligible voters have no say in the election.

In protest, three pro-democracy civic groups organized a referendum for the public intended to support demands for universal suffrage by 2019 and assess the extent of public support for Fernando Chui’s re-election.

More than 7,000 Macau citizens have voted in the referendum so far. The organizers set up an online voting platform and five on-the-street polling stations to be open from Aug. 24 to Aug. 30. But the city's Office for Personal Data Protection alleged that the collection of personal information for the referendum went against Macau's constitution — also known as the Basic Law — because it does not endorse any sort of referendum.

Organizers accused authorities of political suppression, arguing that voters voluntarily provided personal data for verification. Fei Te, a columnist from citizen media platform inmediahk.net, argued that police did not have any legal ground for the crackdown:

Strange as it seems, the judgment of the Macau Court of Final Appeal stipulated that, even though civil referendum is not a right contemplated by the law, the law does not prohibit referendum; residents 'are allowed’ to do so. Therefore, the authorities disregard the ruling but threaten organizers and potential voters, to minimize voting turnout as far as possible.

In Fei's view, the Macau government is thinking of protests held in May over the “bill of greed”, a bill that would have compensated high-ranking officials after they leave office and exempted the head of government from criminal liability during his or her term. Around 20,000 people — about 4 percent of the city's entire population — took to the streets against the bill and successfully forced the government to scrap it

With that history, Fei thinks the government is worried the referendum might evolve into another wave of anti-government mobilization:

[...] the Macau government had lost confidence in its authority. In fact, the questions in the referendum are only, “Do you agree the chief executive should be directly elected in 2019”, and “Do you have confidence in Chui to be the next leader”. People are free to choose “No” and “Yes” respectively. A confident candidate should not be worried. However, some people are not willing to accept the result. They worry that this will bring about another anti-government movement after the “bill of greed”.

Chou Kwok-ping, a scholar and an advocate of the referendum, compared the responses to civic referendums in Hong Kong and Macau and concluded that all rulers supported by an undemocratic system are afraid of any sort of referendum. Pro-democracy activists in Hong Kong have campaigned throughout the summer for the right to choose the candidates for the city's next chief executive election in 2017, while Beijing insists a committee pre-select them:

China considers Taiwan, which is democratic, a wayward territory and not independent.

The police crackdown, however, will only intensify the social and political discontent against the unequal distribution of wealth in the city. The number of protesters keeps increasing in annual rallies on Labour Day on May 1, China's National Day on October 1 and Macau's Reunification Day on December 20 as more and more Macau citizens come to believe that a democratic system is the solution to social injustice.

This story by Ronald Yick was originally published on our partner Global Voices Online, a community of bloggers from around the world.