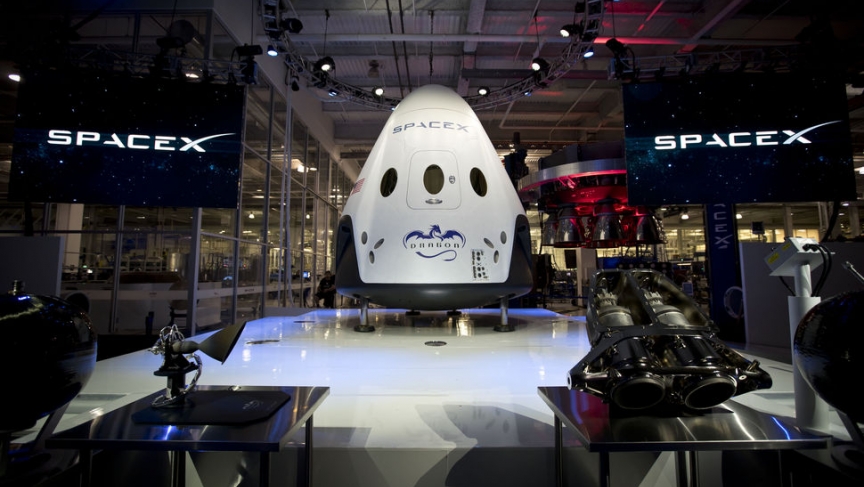 SpaceX's dragon capsule is one of the contenders to take NASA astronauts to the International Space Station.
Credit:

The deteriorating relationship between Russia and the West has made it more important than ever for NASA to find its own way to get astronauts to and from the International Space Station (ISS), rather than relying on Russian rockets.

Fortunately, NASA has been planning ahead and investing millions of dollars for the last four years. Now, the US space agency is poised to award a new round of development and flight contracts to support its trips to low-Earth orbit into the future.

Discovery News looks at the three US companies — Boeing, SpaceX and upstart Sierra Nevada — that are competing to be the private sector provider of transportation for NASA astronauts heading to the ISS.

The UN sent its latest peacekeeping force to Haiti in 2004 to support the country's transitional government. And it has been there to help ever since, including providing support after the devastating 2010 earthquake. It turns out its soldiers have left Haiti another legacy — single moms raising the children of peacekeepers.

PRI's The World spoke with Roselaine Duperval, whose five-year-old daughter Sasha has an Uruguayan father who left before she was born. The UN forbids relationships between peacekeepers and locals. The reason, says Uruguayan Colonel Girardo Frigossi, is that, no matter the circumstances, those relationships can never be truly consensual. "Because the power is in the UN soldier — because they have food, they have water, they can provide security, they have money.” The mothers are seeking child support through the UN.

A group of non-extremist Syrian rebels discovered an innocent-looking laptop when they attacked and overran an ISIS encampment in the Syrian province of Idlib, near the country's border with Turkey. That was in January and the Syrian rebel group commander kept the laptop. He didn't realize what was on it.

He showed it to a reporter from Foreign Policy, who discovered hidden files containing not just typical Islamist and jihadi propaganda, but detailed documents about the terrorist group's strategy. Among them were instructions for developing and testing weapons of mass destruction.

The documents suggest the computer's owner, a Tunisian man named Muhammed S., was teaching himself how to mount an attack using biological weapons. There's no indication that ISIS, the rebel group that now calls itself the Islamic State, has succeeded in obtaining weapons of mass destruction, let alone mastered a delivery system that would make them useful. But the discovery is a startling reminder of how dangerous ISIS may be.

Pope Francis has made headlines and won friends around the world for his down-to-Earth approach to his faith. He's fed the poor and encouraged other Catholic leaders to focus less on politics and more on social justice. But he's also warned about the plight of Christians in Iraq and come very close to endorsing US air strikes in Iraq as a "just war" to stop the spread of ISIS terrorists. And it's those efforts, in particular, that have put him in the crosshairs of ISIS.

According to The Daily Beast, Italian officials have dramatically ramped up security in Rome over concerns that the pope, as well as symbols of Catholicism around the country — including churches — could be targeted by ISIS-affiliated terrorists. For example, authorities have put new restrictions on the airspace near the Vatican and the country's foreign ministry. For their part, Vatican officials have dismissed claims that the pope is a target, saying it is business-as-usual for the leader of the world's largest Christian faith.

Dr. Rebecca Gomperts considers herself a human rights activist. The Dutch physician and her organization, Women on Web, want to help the 40% of all women who live in places where abortions are either illegal or severely restricted. They say they are doing that by providing high-quality, mail-order medicines that induce miscarriages in the first trimester.

PRI's The World spoke to Slate Reporter Emily Bazelon about the how the medicine works and the online support provided by Women on Web. Bazelon says the need for safe abortion options is huge. She gives Brazil as an example. Though abortion is illegal there, more than 1 million Brazilian women decide to have an abortion each year — and more than 200,000 are hospitalized after botched or incomplete abortions.

The Bardarbunga volcano in Iceland, which recently grew active and raised concerns across the North Atlantic, finally erupted Friday morning — but the eruption was only a small one. Icelandic officials moved quickly to close airspace and raise its alert status, but it turned out this eruption posed little threat to aviation, or to Iceland itself. The eruption alert status was reduced, the airspace was reopened and officials returned to watching the volcano closely to see if the volcano settles down down that some pressure was relieved, according to The Independent.