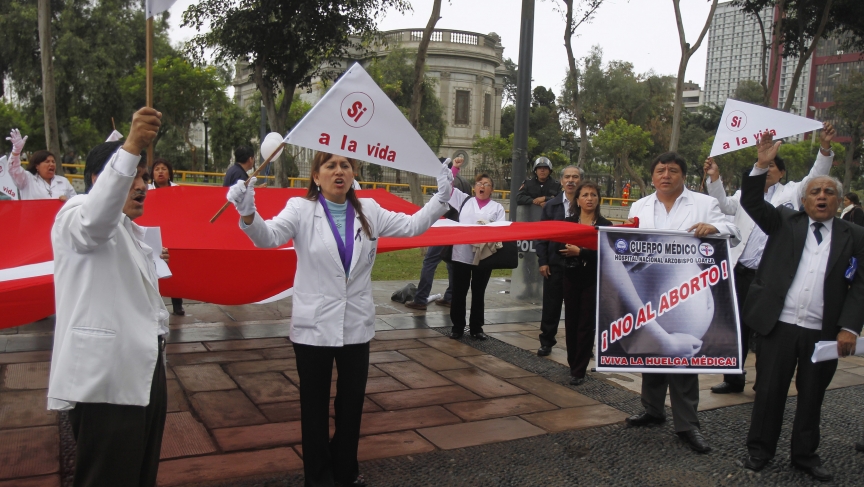 Public sector doctors shout slogans during a protest against therapeutic abortion in downtown Lima July 2, 2014. Peru's government recently adopted national guidelines legalising abortions to save the life or preserve the health of a pregnant woman, local media reported. The signs read as "Yes to life" and "Abortion No!".
Credit:

On September 1, the final piece of a sweeping new abortion law will go into effect in the state of Texas — it will require all abortion clinics to be held to the regulatory standards for ambulatory surgical centers.

The restrictive nature of the law means that only six clinics are expected to remain open in a state that spans 270,000 square miles, meaning an abortion facility will be at least 150 miles away from more than 930,000 women in the state.

But the access issue in Texas is just one small part of a global trend. Almost 40 percent of the world’s population lives in countries where abortion is either banned or severely restricted.

Dr. Rebecca Gomperts, a physician and activist, is taking it upon herself to change that statistic by providing access to a combination of abortion drugs that women can administer themselves. Her Amsterdam-based organization is called Women on Web. Started almost a decade ago, it’s a “telemedicine support service” for women who are seeking medical abortions.

And according to Slate Reporter Emily Bazelon, Gomperts' approach is gaining traction among abortion rights activists in the United States. It's a subject she reported on for a new piece in The New York Times Magazine this week.

“She is a radical, I would say — she thinks of herself as a human rights activist,” Bazelon says of Gomperts. “She’s very focused on the suffering and hardship for women when they live in places where it’s impossible or nearly impossible to access abortion.”

Formerly a doctor for Greenpeace in the 1990s, Gomperts’ work as an advocate inspired her to develop this program.

“Going around the world as a Greenpeace activist, I think, showed her the power of direct action,” says Bazelon. “She also encountered families where mothers had died from back-alley abortions and that really galvanized her.”

According to the World Health Organization, about 47,000 women die each year due to unsafe abortions, something Bazelon says Gomperts wants to change.

“Women all over the world who live in countries where abortion is illegal or very restricted can write in to the help desk of her organization and get connected with a doctor who will write a prescription [for abortion drugs,]” says Bazelon.

The medication prescribed by the doctors of Women on Web both terminates a fetus and causes a woman to expel a fetus. Bazelon says these prescriptions are filled by an Indian-based drug exporter, and Gomperts contends that the medication provided by the exporter is safe and has been verified for quality.

“Research shows that [the medication] is very effective — up to 98 percent effective in the first trimester, and that they’re safe relative to other types of procedures and relative to giving birth,” Bazelon says.

According to Bazelon, the medication provided by Women on Web essentially induces a miscarriage.

“For all of time, women have been naturally miscarrying by themselves,” says Bazelon. “If it’s really early in the pregnancy, sometimes it isn’t physically difficult. Other times, it can be painful and take place over hours and be a hard thing to go through.”

From India, the medication is shipped to women all over the world. In addition to the medication, Women on Web provides information to women on what they can expect to experience after the drugs are taken. Bazelon says that Gomperts has also done the research to make sure her organization is operating legally.

“They don’t serve women after the first trimester,” says Bazelon. “In fact, if women get in touch with them and they’re more than nine weeks pregnant, the organization says, ‘We’re sorry, but we can’t help you because we need time to mail you this medication and we want to make sure you get it within the first 12 weeks.'”

Bazelon acknowledges that, right now, there is nothing stopping someone from potentially lying about the stage of their pregnancy in order to obtain these drugs.

“The drugs do work in the second trimester in terms of ending a pregnancy,” she says. “The risk goes up, and also what it’s like to actually deal with the experience becomes much more difficult for a lot of women. At that point, having a doctor’s supervision is recommended.”

As of right now, Bazelon says that Gomperts is one of the only physicians who provide this type of service.

“Women all over the world are ordering abortion pills online, but often they have no assurance that the pills are of good quality or that they’re not fakes,” says Bazelon. “That’s the crucial link that she’s providing here.”

On the whole, Bazelon says that those in the reproductive health community are embracing Gomperts’ approach.

“I found that every expert I talked to who knows this subject was very much in favor of disseminating good, quality drugs with the right information,” she says. “The reason has to do with what public health officials call harm reduction — if you live in a country where abortion is illegal, you’re not going to be less likely to have an abortion.”

When discussing harm reduction, Bazelon points to South America. In Brazil, abortion is illegal and women can be prosecuted for having the procedure. Yet, more than 1 million Brazilian women decide to have an abortion every year — and more than 200,000 Brazilian women are hospitalized each year after botched or incomplete abortions.

“Public health officials look at that and see a clear cost-benefit analysis,” says Bazelon. “They say women who are going to end their pregnancies are much better off taking this relatively safe medication than going through a traditional back-alley abortion, which really is dangerous.”

“It’s impossible to take the politics out of abortion — especially in this country, it’s kind of unimaginable,” she says. “If you were thinking about this in straight up public health terms, women would be able to make choices that were simply based on what is best for their safety. But that’s just not the world we live in.”