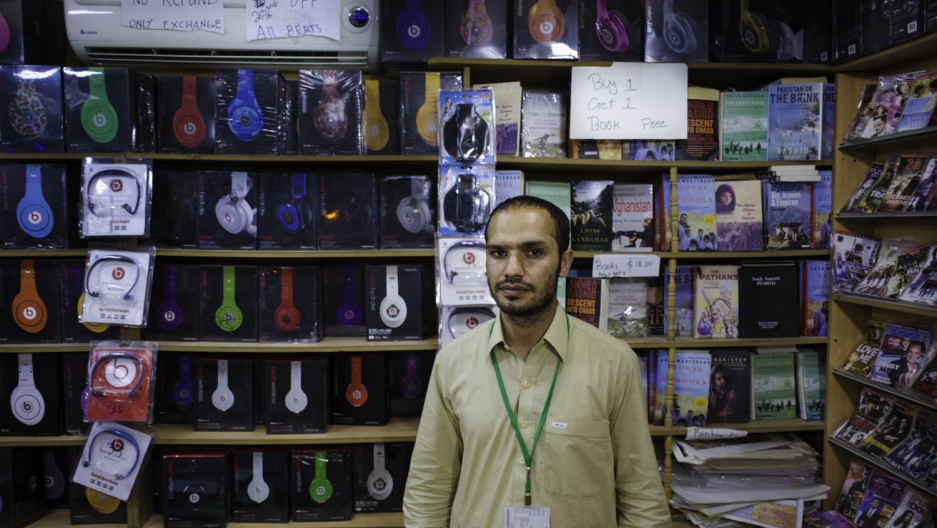 Sajad Ahmad, proprietor of the House of Knowledge, has marked down all his wares as he prepares to close his shop.
Credit: Ben Brody
Share

KANDAHAR AIRFIELD, Afghanistan – As the US troop presence dwindles here, The House of Knowledge is closing.

Sajad Ahmad set up the shop on a retail strip at Kandahar Airfield hoping it might help to enlighten the soldiers by offering them books about Afghanistan history and culture. At the height of the US presence, Kandahar hosted 30,000 soldiers.

“Business was not good,” Ahmad said.

The House of Knowledge had become a fixture on what soldiers called “The Boardwalk,” the social center of the base featuring a Burger King, TGI Friday’s, Tim Horton’s donuts and other Western shops. As the US dramatically reduces its troop presence here, some shopkeepers say they are going to stay and adapt to their new clientele, Afghan soldiers and civilians. But many stores are closing for good.

House of Knowledge owner Ahmad is a slight, serious man from Kandahar who rarely smiles. He reveals his deep intellect and sensitivity grudgingly, as he has found few people here who share his passion for books and learning.

“I opened House of Knowledge in 2009 to sell books that would help the Americans understand Afghanistan, because understanding will bring peace,” said Ahmad at his shop.

“I had to get rid of most of my books and sell DVDs and headphones instead,” he continued.

Many of the restaurants and electronics shops on the boardwalk are owned and run by people from all over Asia, including the Philippines, Bangladesh and Pakistan, but a few Afghan-run shops sell local souvenirs and jewelry.

The Tim Horton’s left with the bulk of Canadian forces in 2011, and TGI Friday’s has just been bulldozed into rubble. Even the Green Beans Coffee Shop, a ubiquitous mainstay of US bases in Iraq and Afghanistan, is gone. So are the battle-hardened faces fresh from fighting in Helmand, who just a few years ago gawked in disbelief at the rear-echelon troops gulping down smoothies and pizza without a care in the world.

Now nearly all of the soldiers at Kandahar have ceased combat operations, and the air among soldiers is relaxed. Not as much with the shopkeepers.

A soldier at Kandahar Airfield shops for jewelry on the 10-year-old store's last day of business. (Ben Brody/GlobalPost)

In 2010, Ahmad the bookseller had an impressive inventory of books on Afghanistan, including esoteric titles like “The Other Side of the Mountain,” a brilliant 1999 treatise on Mujahideen tactics during the Soviet occupation. Aside from books, he also sold beautiful vintage postcards and maps. He still carries modern essentials like Steve Coll’s “Ghost Wars” and several Ahmed Rashid books, but the bookshelves only occupy about 10 percent of the store now.

“Afghan history is just entertainment for people here. They don’t realize all the lessons are right in front of them, all the mistakes have been made over and over for thousands of years,” Ahmad said stiffly. “But no one comes to help Afghanistan, they just come to fight. We must have some secret treasure I don’t know about.”

Ahmad will close the doors of the House of Knowledge in a few weeks and look for work in Kandahar City, but said he fears there are not enough jobs to go around, and business there is slow while the presidential election drags on unresolved.

Suliman Muhammad, manager of a new Afghan restaurant on the boardwalk, is optimistic about his prospects there. His restaurant imports American beef, lamb from Australia, and fresh local vegetables to make traditional Kandahar dishes.

“Local people don’t usually use recipes when they cook, but we have to be consistent so we hired a great cook, Nahematulah, from Kandahar City to make our menu,” said Muhammad. “Afghan soldiers and the local people will appreciate this quality food when they come here after the Americans leave.”

The restaurant is already a hit with soldiers looking for a change from the bland cafeteria food at KAF — the heavily spiced chappli kebab is the most popular with Americans, said Muhammad, who worked in restaurants in his native Pakistan for the last 14 years.

Some shopkeepers are staying, but changing their stocks to offer what Afghan soldiers want — and can afford. An average Afghan enlisted soldier makes about $180 a month, about three times the national average salary. That still pales in comparison with US troops’ pay. A brand-new Army private makes over $2,000 a month in Afghanistan.

“My cigarette store will close, my bike shop stays open,” said Najibullah, a Kandahar man and longtime fixture on the boardwalk. “The bikes I sell now are from Dubai, and too expensive for Afghan soldiers. I’ll have to get used bikes from Kabul to sell here now.”

As the drawdown of troops heads into its final stages, Najibullah said business is slow. But he doesn’t believe the Americans are really leaving, even as they tear down their infrastructure around him.

“The new president will sign the security agreement and the (US troops) will stay for years,” Najibullah said. “How could they leave now, after all the money they spent?”