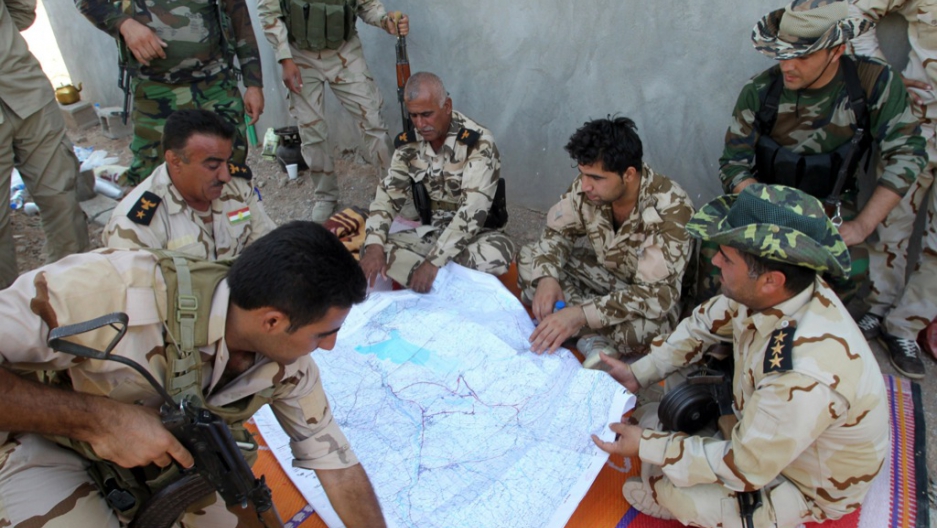 Peshmerga fighters look at a map as they hold a position near the strategic Jalawla area in Diyala province, a gateway to Baghdad, as battles with Islamic State continue on August 25, 2014.
Credit: Ali Al-Saadi
Share

LISBON, Portugal — European Union leaders have met 162 times since the bloc first began holding regular summits back in 1975, but this Saturday's gathering will be their first-ever during the month of August.

The EU's presidents and prime ministers are breaking their previously sacrosanct vacation month amid a summer of violence that has seen Russia foment bloody unrest in Ukraine; Islamist gangs sow terror from Nigeria to Iraq; and the deadliest upsurge in Israeli-Palestinian fighting in a decade.

Officially, however, a response to the arc of instability stretching around the EU's eastern and southern flanks won't be on the summit agenda.

Instead, the 28 national leaders meeting at the bloc's headquarters in Brussels, Belgium, are supposed to spend their few hours together resolving a spat over which of their nominees should be appointed to top EU jobs coming up for grabs in autumn.

There's no doubt the unprecedented array of security threats will force their way into the talks, but the summit's lightweight schedule underscores what many see as Europe's dangerous disconnect from the instability surrounding it.

"There has to be a recognition of how these conflicts, these confrontations, this violence is really impacting on Europe itself," complains Shada Islam, director of policy at Friends of Europe, a Brussels-based think tank.

"In Brussels, in EU capitals more generally, there is a feeling that all of this is happening really far away ... the feeling that Europe is in a bubble, disconnected from the rest of the world, from the conflicts around it," she says.

Internal divisions, preoccupation with domestic economic woes, and fears of getting dragged into another conflict after the unpopular wars in Iraq and Afghanistan stopped Europe from intervening in Syria's civil war.

For months, EU nations dithered over their response to Russia's destabilization of Ukraine. Only the killing of 298 people on Malaysia Airlines Flight 17 forced the EU to impose sanctions on the Russian economy — and even those have failed to deter Moscow from stepping up its support for the insurgents.

Now the scope and intensity of this summer's violence are triggering calls for Europe to rethink its foreign and security policy and forge a more interventionist line.

Germany's former Foreign Minister Joschka Fischer on Tuesday laid out an impassioned plea for a stronger European policy that would include sending arms to Kurdish fighters resisting the advance of Islamist State extremists in northern Iraq.

"A Middle East with a brutal, unfettered terrorist state at its center would be a direct threat to neighboring Europe’s safety. So why not help those in Iraq who are willing and able to confront this peril?" Fischer asked in a syndicated article. "Europe must do more for collective security ... Unfortunately, too many European leaders cannot — or will not — understand this."

Europe's failure to stem conflicts raging just outside its borders is calling into question the EU's focus on "soft power," centered on discreet diplomacy, economic incentives and in particular Europe's own example of former enemies working together to build common prosperity.

Diplomats acknowledge the European model has been undermined by divisions laid bare during the euro zone's debt crisis, and by the EU's failure to prevent a localized problem in Greece from plunging the world's largest economic bloc into prolonged recession.

"When we met with Putin then, when we met with the Brazilians, they had nothing but contempt for us," says one senior official. "I'm sure our weakness over the euro encouraged Putin to think he could get away with what he's doing in Ukraine."

Those calling for a more muscular European role are worried about a vacuum in international relations, given the reluctance of the United States under President Barack Obama to play a "global cop" role and the unwillingness of emerging powers to take on global responsibilities.

China and India appear barely concerned with events in the Middle East or Eastern Europe. Brazil's most memorable intervention in the Ukraine crisis came when a leading government official gleefully exhorted exporters to exploit the "big window" opened by Russia's decision to ban EU food products.

The gravity of the security situation is stirring a tougher approach in some European countries, as shown by the sanctions eventually imposed on Russia, NATO discussions on opening bases on the territory of Eastern European allies, and the decision by several EU members to send arms to anti-Islamic State forces in Iraq.

Germany in particular has been moving away from its traditional post-World War II reluctance to take on a forceful world affairs position.

After long urging caution in relations with Russia, Chancellor Angela Merkel has been stepping up pressure on Putin and has taken a leading role in pushing Moscow and Kyiv to talks. Germany is also considering arming Iraqi Kurds.

A pro-Russia militant stands guard at a checkpoint in Maryinka, 25 kilometers west of Donetsk, on July 15. (AFP/Getty Images)

"Germany must dare to shoulder greater responsibility internationally," Foreign Minister Frank-Walter Steinmeier told a meeting of ambassadors on Monday. "An active German foreign policy isn’t simply something which is nice to have but, rather, an absolute necessity."

Supporters of a stronger European stance are heartened by the signs of a tougher German approach, but they are concerned about the lack of a common European response to multiple security threats.

"You are not getting a European voice and that I think is very alarming," says Islam, the Brussels think tank expert. "There has been a re-nationalization of EU foreign policy ... Europe does not exist on the foreign policy front anymore."

Putting together a united EU position won’t be easy. There are deep divisions among the 28 member nations.

For example, Hungarian Prime Minister Victor Orban this week announced he was seeking to build a Russia-friendly bloc of nations within the EU to oppose further sanctions. French President Francois Hollande has resisted calls from other EU leaders to halt the sale of advanced warships to the Russian navy.

Their failure to agree on Mogherini's appointment at the last summit is the main reason why the leaders have been recalled to meet this week.

Back in July, several nations, led by Poland, objected to Mogherini, saying she lacked experience and showed bad judgement by cozying up to Putin to protect Italian business interests, even as Russian-backed fighters rampaged across eastern Ukraine.

Poland could well be placated by a tradeoff to appoint its prime minister, Donald Tusk, as chairman of EU summit meetings for the next five years.

The fact that other EU big hitters are prepared to accept Mogherini, despite her lack of gravitas, is an indication that the union's common foreign policy stance is being effectively downgraded. Instead nations are increasingly likely to pursue individual initiatives or work through smaller ad hoc coalitions.

The decision by Britain, France, Germany and Italy to issue a joint statement with the United States on Tuesday to warn against outside interference in Libya, rather than waiting for a full EU position, is one example.

That change may give Europe more flexibility to react to crises without the need to build consensus among all 28 EU members, but it will risk undermining a union already weakened by the financial crisis and Britain's threat to pull out of the bloc unless powers are devolved back to national capitals.

European nations are also being forced to consider how they can back up talk of a more robust foreign policy after years of shrinking defense budgets and deep-seated voter opposition to military intervention. Those issues will still be looming at the next big summit, when NATO leaders gather in rural Wales on Sept. 4.