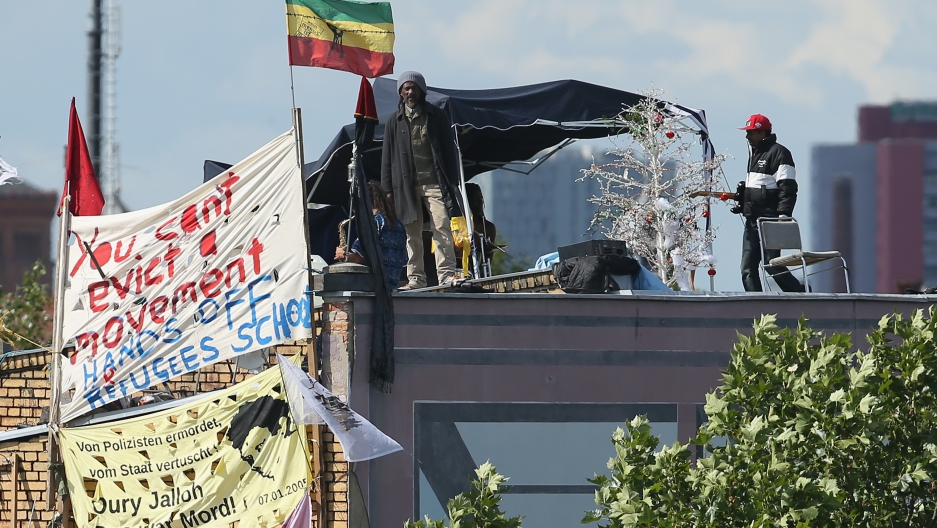 Asylum seekers, mostly from North Africa, occupy the roof of the Gerhart-Hauptmann-Schule school in Berlin's Kreuzberg district. About 40 barricaded themselves inside the school in late June to protest eviction by city officials, who contended asylum seekers there were living in unhygienic conditions.
Credit: Sean Gallup
Share

BERLIN, Germany — High atop a Berlin hostel, an unknown asylum seeker believed to be African grips tightly to a steel railing with one hand. Every few minutes, he grins broadly and capers a bit as he calls down to a knot of television journalists on the street — gathered here because of earlier reports that refugees facing expulsion from the capital were threatening to jump.

African refugees in the Kreuzberg neighborhood of Berlin hold up a document they claim is an official notice requiring them to leave Germany.

The 28 Guertelstrasse hostel was converted into housing for refugees in April as part of a deal to convince asylum seekers to abandon a tented camp in Berlin’s Oranienplatz. They had been living illegally there, in protest against the German government's policies, for more than a year.

But since city authorities ordered 108 mostly African asylum seekers who had claims pending in other German states to vacate their accomodations here, the building has morphed into the latest flashpoint for Germany's refugee problem — with a handful of diehards refusing to leave the rooftop overnight Tuesday.

Historically committed to providing humanitarian relief to the victims of foreign conflicts, Germany has absorbed more refugees from strife in Africa and the Middle East than any other nation in Europe.

But as violence within Iraq and Syria heat up, a housing shortage has prompted new debate over just how many asylum seekers the country can take in, says Claudia Beck, Germany spokeswoman for the Christian aid organization Caritas.

“The situation is already very, very hard for the people, and now there will be much more people trying to come to Europe, and then to Germany,” says Beck, who believes her country must rise to the challenge.

But louder voices are beginning to disagree.

In 2013, Germany was surprised by an unexpected wave of 110,000 requests for asylum — more than five times the number it received in 2006, the low point since the Balkan wars of the 1990s. And with the Federal Office for Migration and Refugees now predicting 2014 requests may rise as high as 200,000, German Interior Minister Thomas de Maiziere this week proposed a strict limit on the refugees the country agrees to accept.

“Whoever is not politically persecuted and needs no protection should not be granted asylum and must leave the country,” de Maiziere said in an interview with a German newspaper published Saturday.

Followed closely by this week’s rejection of asylum claims, the statement has sparked fears a deportation wave is coming for refugees like Haki, from Chad, who lived in a tent in Oranienplatz for more than a year.

“They start to deport people house by house, one by one,” says Haki, who declines to give his last name because his asylum application is still pending.

Some of those who arrive in Germany are automatically considered refugees based on the circumstances they have fled. Others aren't officially recognized as refugees until they've been granted asylum.

Public and government support remains strong for those fleeing conflict or political persecution. But the financial burden of the influx has already pushed some Germans to question whether policies should distinguish war refugees from economic migrants, says Said, an asylum seeker from Ghana.

Germans are more than prepared to welcome refugees from Iraq and Syria, he says, declining to give his surname. But they have less sympathy for Africans who flee places like Libya if they hold passports from peaceful, if poverty-stricken, countries.

“I've tried Italy, Sweden, Norway, Denmark,” he says. “This is my last stop.”

Expulsion of those deemed to be economic migrants may be the only answer, argues de Maiziere, though doing so could prove very difficult.

Already, cash-strapped cities across Germany have been forced to adopt extreme measures to accommodate the stream of refugees making their way here from Italy — where since the beginning of the year the Italian navy has rescued nearly 100,000 people fleeing violence and poverty in countries like Eritrea, Somalia and Syria.

In Hamburg, legislators have already proposed billeting refugees on decommissioned cruise ships moored in the Elbe River and building makeshift villages out of shipping containers, for example.

The city houses about 10,000 refugees in more than 60 locations, and spent around 300 million euros ($396 million) for accommodation and counseling in 2014. But it's struggling to find space for more, says Marcel Schweitzer, spokesman for the Hamburg Department of Labor, Welfare and Integration.

“We believe the refugee policy is a national duty. It’s unbelievable that Hamburg and other cities have to house refugees in containers or tents, while houses are pulled down because of a lack of tenants in other German states,” Schweitzer wrote in an email.

The city of Cologne recently purchased a four-star hotel to convert into semi-permanent housing for its asylum seekers, after being forced to rent rooms for an overflow of some 800 people in 2013.

Other cities like Duisburg, in the western state of North Rhine-Westphalia, have been forced to erect tented camps in forests, stadiums and tennis courts that have drawn criticism for poor conditions.

As of Wednesday afternoon, police were still negotiating with exhausted Berlin rooftop refugees after a 24-hour vigil.