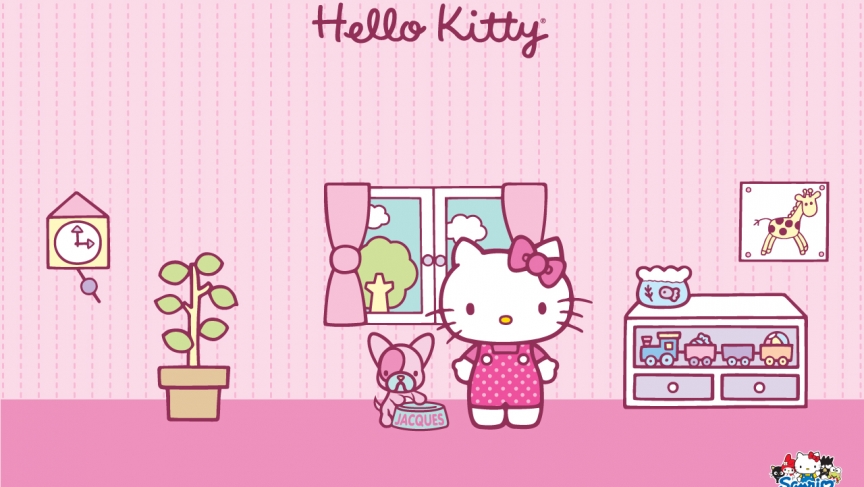 Hello Kitty is no kitty.
Credit:

The Japanese animated icon Hello Kitty first came on the scene in 1974 — created by the Japanese company Sanrio. In the years since, the image of Hello Kitty — with cat-like ears, a red bow and whiskers — has graced theme parks, restaurant menus and even airplanes. Hello Kitty has developed a devoted global following among all age groups.

So Wednesday's news that Hello Kitty is not, in fact, a kitty was something of a bombshell. That's right, Christine R. Yano, who will curate a Hello Kitty exhibit at the Japanese American National Museum later this year, says Sanrio told her that Kitty is not, and has never been, a cat. She's actually a young British girl named Kitty White. In fact, she has a kitty of her own. Consider our minds blown. Fast Company has more.

In a coordinated action last February, German police and prosecutors swept in and arrested about two dozen ex-SS concentration camp guards. It seemed they were turning a new page in what has otherwise been the German judiciary's embarrassing history of ignoring crimes associated with the Holocaust. But now it seems likely even this latest effort will come up short.

In the six months since the arrests, many of the cases have been dropped. Some of the suspects had died — they range in age from 88 to 100. Some were deemed too frail to stand trial. And in one case, authorities realized that one guard had already been tried and punished by a court in Poland. The German newspaper Der Spiegel looks at the cases and where the German government can go from here, if anywhere, before it's too late.

An Antarctic lake, cut off from air and sun for thousands of years, is teeming with life

Scientists and researchers made a startling discovery recently: Underneath Antarctica's thick ice caps, lakes and rivers that have been sealed off for hundreds of thousands of years are filled with microscopic living organisms. Many are similar to creatures found living at the bottom of the ocean, but having adapted to incredibly cold conditions without access to sunlight or air.

PRI's Science Friday talked to some of the researchers who organized the project and recently published their work in the journal Nature. All-told, their sample of one lake found at least 4,000 distinct species of microorganisms — which have been separated from the rest of the planet's evolutionary trajectory for perhaps as long as one million years.

Last spring, you may have seen a picture of an orangutan stretched out like a human on an operating table in Indonesia. That was Angelo, a 14-year-old orangutan who had been shot when he'd entered a palm oil plantation, looking for food.

That photo was one of many that photographer Sandra Hoyn took during a trip in Indonesia. She also snapped pictures of Siboy, a 1-year-old baby orangutan who had been rescued from a pet shop. Staff at the Sumatran Orangutan Conservation Program had to rock Siboy to sleep each night; he'd cry uncontrollably if put down at bed time.

Hoyn spoke to the New York Times' Lens blog — and shared many of her amazing photos. She photographed the massive palm oil plantations that are the biggest threat to orangutan survival, as well as man-made forest fires that are destroying their habitat. Hoyn says she didn't go to Indonesia to photograph the orangutans and their plight, but encountered them and was hooked. She's planning a return trip to take more photos and also video.

The plight of Tibetans at the hands of their Chinese masters is well-reported and widely known. The persecution of the Dalai Lama is often a focus of reports on civil rights in China. What is less well-known is the plight of women living in Tibet. Women often experience intense sexism and physical abuse at the hands of male relatives.

PRI's The World talked to journalist Jocelyn Ford, who produced the new documentary, "Nowhere to Call Home," about the life of one Tibetan woman and the sexism she faces from her family. What makes Ford and her documentary unusual is that the reporter got involved with her story and subject, going so far as to pay the school fees for the woman's son, and even putting herself in the documentary.

The weekend will bring dry and seasonal weather back to the British Isles. Storms rocked the UK and Ireland all week, but, according to AccuWeather, the weekend will bring sunshine and temperatures at or slightly above normal, around 20 degrees Celsisus, or 63 degrees Fahrenheit.