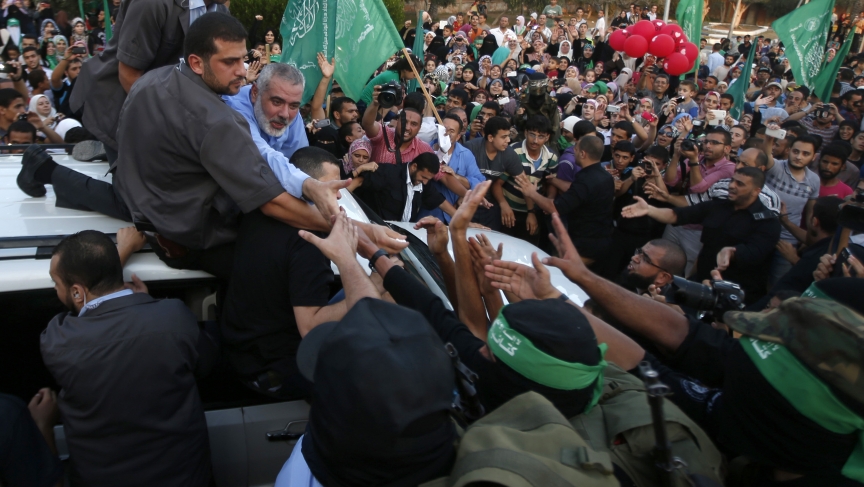 Hamas Gaza leader Ismail Haniyeh waves to Hamas militants as they celebrate with people what they said was a victory over Israel, in Gaza City August 27, 2014. An open-ended ceasefire in the Gaza war held on Wednesday as Prime Minister Benjamin Netanyahu faced strong criticism in Israel over a costly conflict with Palestinian militants in which no clear victor emerged.
Credit:

After seven weeks of fighting, Israel and Hamas have finally reached what could be a long-term cease-fire agreement in Cairo. The 50-day conflict left more than 2,100 Palestinians, mostly civilians, dead, and at least half a million residents of Gaza displaced. On the Israeli side, casualties included 64 soldiers and five civilians.

Levy says that Egypt's disdain for Hamas, an ally of Egypt's ousted Muslim Brotherhood, prevented the country from successfully mediating between Israel and Gaza — leaving the conflict to continue unabated for weeks.

Now the director of the Middle East and North Africa Program at the European Council on Foreign Relations, Levy also notes that the cease-fire hardly addresses most of the underlying problems that prompted this summer of fighting.

“I think this cease-fire has been reached principally because both sides have had enough,” says Levy. “For both sides, the law of diminishing returns for continuing had kicked in. So I don’t think there’s been a dramatic breakthrough in the substance of what is agreed.”

According to Levy, it looks like the cease-fire was politically motivated.

“I simply think that after 50 days, on the Israeli side there has been a degree of exhaustion,” he says. “The Israeli prime minister doesn’t want to get dragged in further — his poll numbers are going down. The Israeli school year is due to start next week, and massive disruptions to that would be terrible for the Israelis, but terribly politically threatening for the prime minister.”

The cease-fire agreement provides Gaza with few gains, but Levy says that continuing the conflict would also be costly for Hamas.

“Right now, they can turn around, claim that they have created, which is significant, a degree of strategic deterrence,” Levy says. “The costs for both sides for going on are greater, and both sides were simply ready for this.”

This agreement is likely to be sustainable in the short-term, says Levy, but the deal does nothing to address the bigger issues at the heart of the conflict, like Palestinian freedom and statehood, the Israeli occupation and security for both peoples.

“We’ve been here before,” Levy says, pointing to similar conflicts between Israel and Gaza in early 2009 and late 2012. “Those cycles did not lead to a fundamental change, and we appear to be back at the status quo ante, therefore suggesting that this will be another window of quiet rather than a deepening change. We’ll be back where we were sometime in the future.”

In the short-term, Levy predicts that there will be a greater effort to establish Palestinian unity between Hamas and Fatah, something that Israeli officials are decidedly against.

Levy adds that Palestinian Authority President Mahmoud Abbas will likely push the issue of border crossings, but other issues will likely remain contentious.

Even though there will be a UN investigation into the numerous civilian casualties of the latest conflict, Levy says the global community should not expect full accountability.

“These things tend to produce reports, but don’t change realities — I don’t think you’ll get greater accountability,” he says.

When it comes to the role international partners played, Levy says that Egypt lost some clout as a useful mediator.

“Egypt had its own agenda against Hamas, and that made a cease-fire more difficult,” he says. “The US is also showing the parties, ‘This is what happens when you prefer us not to be here.’ Especially to the Israelis, who were extremely dismissive if not to say overtly rude regarding the Obama Administration.”

Levy says that Israel attempted to equate Hamas with extremist militant groups like ISIS or Boko Haram, a comparison he says doesn’t hold.

“When you’re actually sitting and negotiating with these people, it doesn’t work to try and draw that analogy,” he says. “Israel and Hamas take each other more seriously, and have a greater degree of I’d almost say respect for each other’s capabilities.”

Though the two sides are unlikely to begin talking directly, Levy says that the dynamics of the Israeli-Palestinian conflict may soon change in the wake of the current crisis.

“You may see a Palestinian unity formation gathering strength where it’s accepted that Hamas has to be part of any solution,” he says.