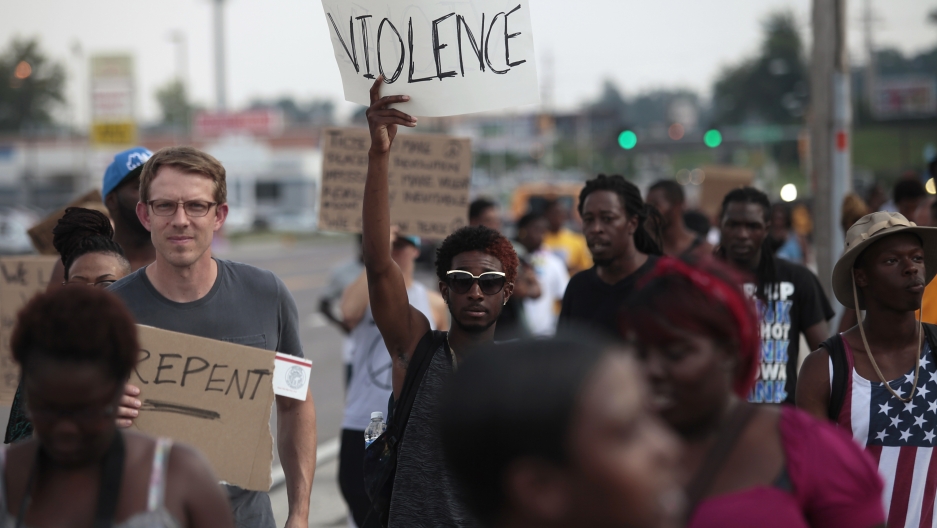 Demonstrators protest against the shooting death of Michael Brown in Ferguson, Missouri, on August 18, 2014.
Credit:

If you're reading this story and you're white, chances are you don't have a single non-white friend. That finding from a new study has become a flashpoint in the already-contentious national debate on race following the killing of Michael Brown in Ferguson, Missouri.

When The Takeaway discussed that point, it sparked sharp and varied reactions. "Demographics and where people live makes a big difference as far as exposure to people from different cultures," said one female listener. "And when you meet them, you just can't get enough"

Or maybe not, according to Anne from Salt Lake City: "I don't really think everybody always wants to mix up and should be OK to not do so. That's kind of a liberty that we have and I think it's a good one." Another listener agreed: "I don't really see the necessity to prove to America that I'm not racist."

But that, says journalist Kai Wright, is "kind of the wrong conversation."

Wright, the editor-at-large of Colorlines and a contributor to The Nation, says that the debate about racism has become too focused on personal actions and interactions. "Since the end of the civil rights movement, we said racism is about individual choices," he says.

"I think some of the pushback you hear when people say, 'Hey, just because I have a black friend doesn't make me not racist, and the fact that I don't have a black friend makes me racist' is rooted in this idea that we said 'Hey, racism today is about individual choices,'" Wright argues. And that feeling of being attacked becomes counterproductive.

"The best way to have a conversation about racism is not calling individuals racists, because you don't get anywhere that way. And I think that's part of what you're hearing," Wright says. "People hear the study and they think, 'That makes me a racist!' That's beside the point."

So what is the point? Wright argues that the debate about race should be about systemic inequalities in American society, especially the effects of deep and widespread segregation in where people choose to live.

And, he says, it also makes it difficult for Americans of different races to understand each other's problems — which is exactly what's happening in the debate over Ferguson.

And that, he thinks, is the real lesson of the controversial study. As listener Caitlin from Cleveland pointed out, "[t]he friendship thing is just an indicator of segregation. It's not an indicator of racism."

This story first aired as an interview on The Takeaway, a public radio program that invites you to be part of the American conversation. The Takeaway and PRI hosted a Twitter chat last week to discuss what happens next. To continue the conversation tweet with the hashtag #BeyondFerguson.