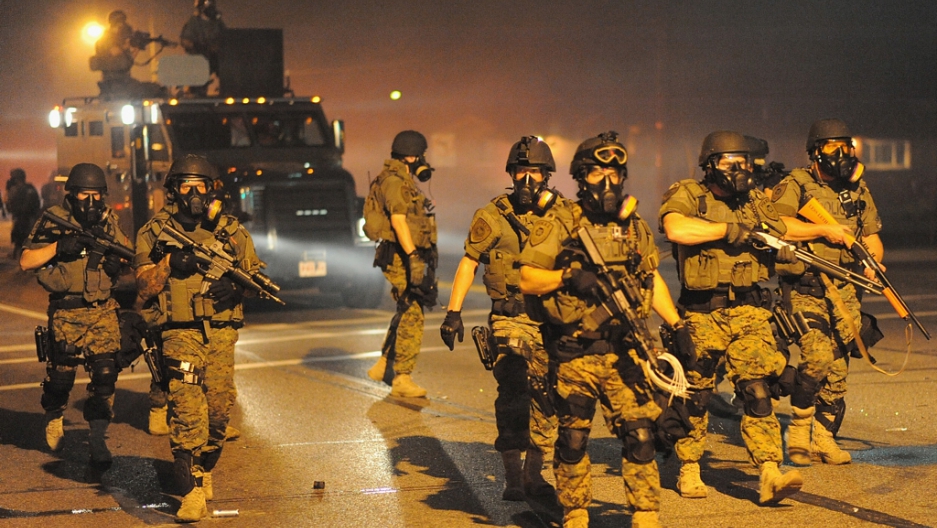 Law enforcement officers watch on during a protest on West Florissant Avenue in Ferguson, Missouri on August 18, 2014 (Michael B. Thomas/AFP/Getty Images)
Credit: MICHAEL B. THOMAS
Share

Editor's note: This article was originally published on Aug. 27, 2014. On May 18, 2015, US President Barack Obama announced new federal oversight and restrictions regarding the distribution of military equipment to US police departments.

Since then, the world has watched the streets of Ferguson turn into a battleground, as heavily armed police officers fired tear gas, shot rubber bullets and pointed guns at protesters denouncing Brown’s killing.

“Solidarity with Ferguson,” tweeted Mariam Barghouti from Palestine. “Remember to not touch your face when tear gassed or put water on it. Instead use milk or coke.”

Numerous people — domestic and abroad — have expressed outrage at the militaristic response of local police against protesters, journalists, and people of color.

Since the protests erupted earlier this month, many have called into question the US Defense Department’s 1033 program, which allows surplus military equipment to be transferred to local police departments for counter-narcotics and counter-terrorism operations.

The 1033 program is just one part of a larger story about how American police departments became militarized — a global story about the importation and exportation of equipment, tactics, and funds for the purposes of domestic and international security.

Here’s another part of the story: the international Urban Shield SWAT training and weapons vending exposition in Oakland, Calif.

The annual event, which will be hosted by the Alameda County Sherriff’s Office from Sept. 4 to 8, brings together local and national first responder agencies for a 48-hour exercise in simulated disaster preparedness, information exchange, and equipment demonstrations. And it does so while encouraging participation from international forces. Israeli soldiers patrol an area in the West Bank town of Hebron on June 15, 2014, as they search for three teenagers who went missing near a West Bank settlement.

Past participants have included military and domestic security teams from Bahrain, Brazil, Jordan, Israel, and Qatar. (It’s worth noting that some of these countries have been routinely criticized for using excessive force against civilians.) This year, the Brazilian team is returning alongside Singapore’s Police STAR Unit and South Korea, according to the expo website.

The two-day trade show linked to the event also includes a slew of vendors from armored vehicles and weapons manufacturing companies, many of whom promote the latest in communications supplies, tactical gear, crowd control methods, drones, and guns.

“It’s impossible to imagine suppressing resistance to policing by increasing policing,” said Rachel Herzing of Critical Resistance, a national grassroots organization started in Berkeley, CA to end the prison-industrial complex — the phrase used to explain government and private industry’s mutual use of surveillance, incarceration, and increased policing as a solution to socio-economic problems.

“It’s the same playbook that law enforcement and the government has been using for decades in this country and not to any better effect,” Herzing said.

Critical Resistance, War Resisters League, the Arab Resource and Organizing Center, and a number of other organizations have banded together to form a coalition in California intent on stopping the annual Urban Shield demonstration. They claim police militarization earns huge profits for private companies, while disproportionately affecting immigrants, Arabs and Muslims, people of color, and poor people worldwide. Anti riot police officers in Brazil during a protest against corruption and price hikes, on June 20, 2013, in Rio de Janeiro.

The Urban Areas Security Initiative — a grant program of the Department of Homeland Security — provides funding for programs such as Urban Shield, which it believes facilitates regional preparedness in “high-threat, high-density urban areas.”

At least 25 percent of UASI funding has gone directly to “law enforcement terrorism prevention activities,” including information sharing, establishing regional ‘fusion’ centers, and increasing the use of security patrols.

According to the Urban Shield website, participating teams will take part in 35 individual events, including active shooter scenarios and exercises in radiological weapons detection. Prior to the events, each team receives an introduction to new technology that will be used in the training scenarios.

Teams are then evaluated and debriefed on their performance. Last year’s top SWAT teams are pictured on the website in camouflage outfits standing in front of armored personal carriers.

“Urban Shield plays a leading role in the globalization of repression,” Ali Issa, National Field Organizer with the New York-based pacifist group War Resisters League, said. “This means both that US police and private companies are exporting tactics and toys to the agencies from Guam, Qatar, and Norway that attended last year. And units from Bahrain, Brazil, and Israel are bringing their ‘crowd control’ methods here.”

Issa said that as police forces around the globe continue to militarize, popular resistance will also continue to rise.