"Bread and Dripping," a traditional English dish, is the first course of Tom Sellers' menu at his London eatery, Restaurant Story.
Credit:

Tom Sellers might be London's hottest young chef. He's worked at some of the best — and fanciest — restaurants in the world, and he now has his own fiefdom in London, called Restaurant Story.

Sellers' restuarant already attained a Michelin star, a mark of deep quality in the rarefied world of fine dining. But the first course of Sellers' menu, "Bread and Dripping," nods at a different world — a working class town in England.

Tom Sellers, only 26, grew up in the "very working class town" of Nottingham. "That whole area was responsible for a lot of heavy work," he says. "My father was a working man, worked his whole life, from very humble beginnings." 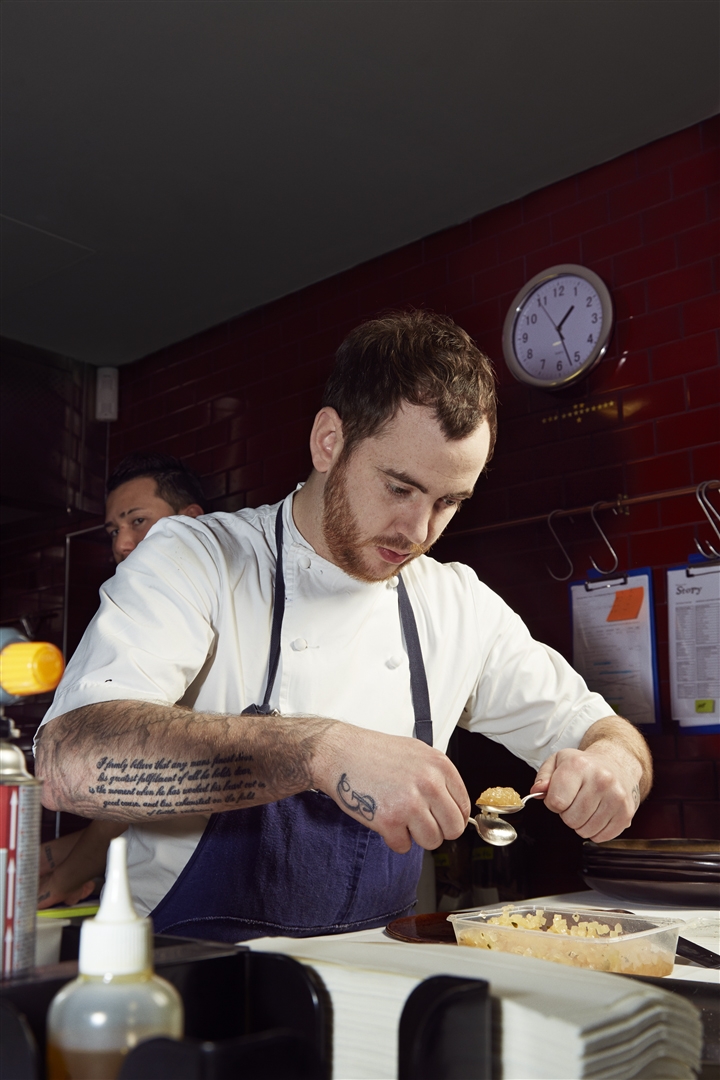 At the age of 26, chef Tom Sellers has already worked at some of the world's most renowned restaurants. Now he's running his own — called Restaurant Story — in London.
Credit:

After his stints cooking other chefs' food, Sellers drew on his memories when it came to creating his own menu. "When I wanted to open a restaurant, I used a lot of my memories as a child and my upbringing to influence the food that we cook every day in the restaurant," he says. "On a Sunday in England you have a 'Sunday lunch,' which is a big end of the week meal that your whole family would sit around and eat. Most Sundays, my father would save the dripping from the meat that was cooked for that lunch."

Dripping is animal fat left over from a roasted joint of meat. More often than not, that would mean fat from a cow. Seller's father would dip bread into the dripping for a snack later that night or during breakfast the next morning.

His father wasn't alone. Bread and dripping was — and for many Britons, still is — one of the residual treats of a Sunday lunch. "If I was asked to put humble food on a plate, I think that this dish signifies that," Seller says.

But Sellers' take on the dish for his restaurant isn't as simple as all that. It features, of all things, a candle. "I worked very hard on making a tallow candle — which is a candle made from animal fat, not wax," he explains. "That's lit tableside in the dining room."

Sellers then describes the rest of the dish: "It's served with our homemade bread, which is a bread made from fermented apples and black treacle. And then it's finished with an English-style relish made from slow-cooked veal tongue, chicken jelly, and pickled horseradish."

"The 'secret Santa' in the whole dish is that the candle is lit at the table without the diner knowing that it's a beef fat candle," he says. "It's something that's become our signature dish here at Restaurant Story."

Sellers says that serving the dish in a Michelin-starred restaurant is 'a true reflection" of who he is and what he's learned along the way. There may be lots of showmanship, but it's still just bread and dripping.