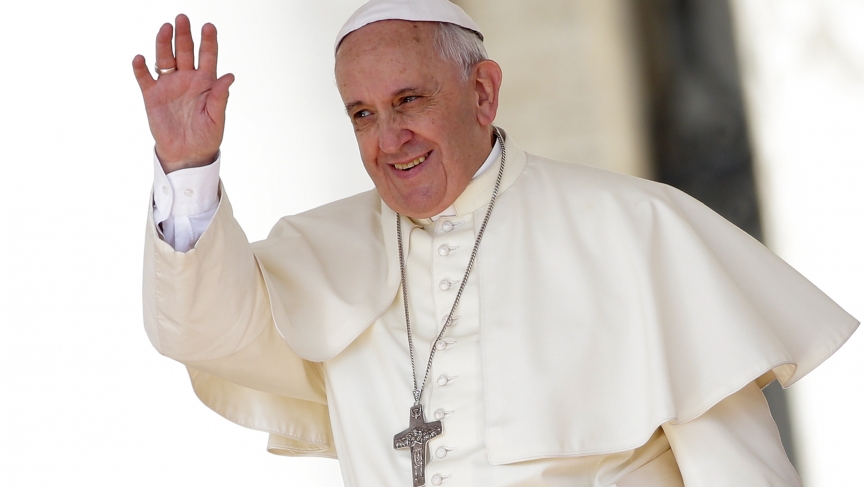 Pope Francis waves as he leads his weekly audience in Saint Peter's Square at the Vatican August 27, 2014.
Credit:

Pope Francis has tried to refocus the Vatican by highlighting issues of human rights and economic justice and inclusion. But last week, the Pope entered into a conversation about war and confronting evil. When he was asked about ISIS, Francis said that the militant group must be stopped.

“Where there is an unjust aggression I can only say that it is legitimate to stop the unjust aggressor,” he told reporters last Monday while returning to the Vatican from a trip to South Korea. “I underscore the verb ‘to stop' — I am not saying ‘bomb’ or ‘make war,’ but ‘stop him.’ The means by which he can be stopped must be evaluated. Stopping the aggressor is legitimate.”

The Pope raises the issue of a so called "just war" without clearly addressing the situation in Iraq and Syria. Theologians have noted that this may be a problem for the Catholic Church, an institution that has been giving its permission for various wars for centuries.

Bob Meagher, a humanities professor at Hampshire College and the author of the upcoming book "Killing from the Inside Out: Moral Injury and Just War," says the Pope has stepped into some very difficult moral territory.

According to Meagher, the Catholic Church has traditionally considered a conflict a “just war” if it is a war declared by God or the Pope, or one declared by a “legitimate ruler.”

“Of all of those, the most ‘just’ — the unquestionably just or righteous wars — were those declared by God or those declared by the Pope,” he says. “The church has, for 1,500 years, endorsed, embraced, and reinforced the ‘just war’ tradition, which I feel to be extraordinarily unfortunate.”

From the beginning, the Catholic Church’s so-called “just war doctrine” has been misunderstood and caused a great deal of damage to the world, Meagher says.

“It is essentially a lethal lie, and the church is largely responsible for its origins and preservation,” he says. “I continue to hope that this Pope will step back from that—that he will reexamine and reconsider, and hopefully renounce for good that tradition and the church’s ties with it.”

Though Pope Francis and the Catholic Church seemingly maintain the view that some conflicts are more just than others, Meagher points out that those involved in conflict — veterans and others — make a distinction between what is “just” and what is “necessary.”

After war, veterans often come back haunted by the terrors of conflict. They often face an internal struggle that must balance the concepts of right and wrong with necessary obligations their commanding officers, and ultimately the nation, handed down to them.

To help lift the darkness that surrounds the brutality of combat and the memories carried therein, Meagher says that nations cannot simply welcome back service members, but listen to them as well.

Meagher points to Timothy Kudo, a veteran who has candidly spoken to the public about the morality of conflict in pieces like “I Killed People in Afghanistan. Was I Right or Wrong?” In several conversations, Meagher says that Kudo told him that killing is always wrong, but it’s something that he didn’t realize until he went to war, until he was involved in combat, and involved in killing.

“He says it’s always wrong to kill, but sometimes it is necessary,” says Meagher. “That is the moral cost, that’s the spiritual cost that veterans, soldiers, and Marines have to pay — that’s what we’re asking them to do. But we have a moral and social contract with them, when they return, to understand what we have expected of them, the price they have paid for it, and what they need now to heal ... if healing is possible.”