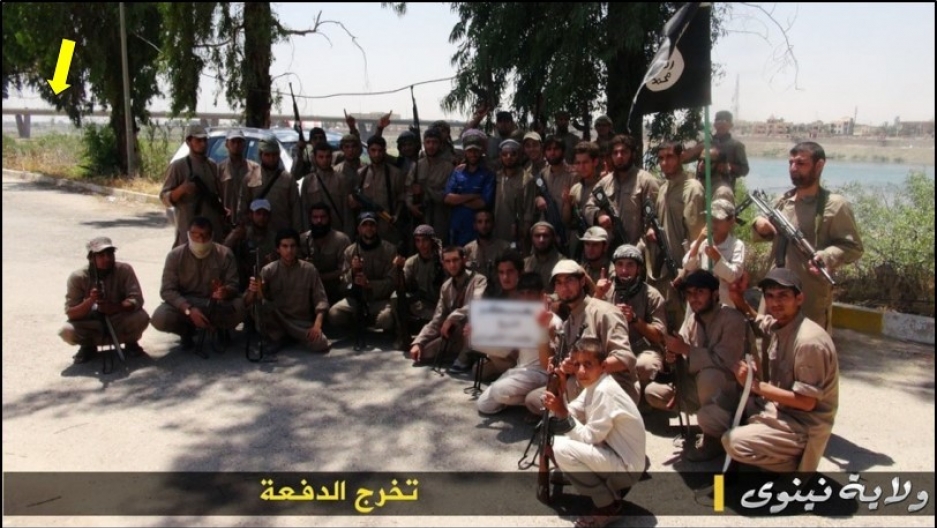 This photo purportedly shows an ISIS class of 2014 martial arts graduation photo, and in the background, a bridge spanning a large river.
Credit:

When the Syrian regime launched chemical attacks last year, it wasn't the CIA or MI6 who confirmed the news for the world. Instead, Internet obsessives like Eliot Higgins used images, videos and maps to fill in the details. Now their methods are becoming important tools for journalism.

Higgins has morphed from a hobbyist to a renowned blogger nicknamed Brown Moses and now into the head of a new crowd-funded journalism startup called Bellingcat. He and other websites like Storyful do creative investigative work, often combing through photos and videos published online to verify facts or locate militant groups.

"The concept that (Higgins) has developed is quite remarkable," says Washington Post contributor Rick Noack, who recently profiled Higgins. "Basically just sitting at home using your computer, watching YouTube videos, looking at pictures and really making this connection between maps, what's happening on the ground and what's being posted on the Internet — I would call it revolutionary."

The site recently produced an analysis of the video posted by ISIS showing the beheading of journalist James Foley. It also used social media and tools including Google Earth and Panoramia to locate a training camp in northern Iraq for ISIS militants.

"Theoretically everyone could do the same, but nobody's ever thought about it," Noack says. "If you think about it, all the pictures he uses are not sensitive information or classified information, they're freely available. ... Higgins is the first person who's publically blogging about what he finds when he looks at these pictures."

Noack says the new techniques of photo forensics are a welcome innovation for journalists. That's particularly true in Syria, where very few reporters can now see events firsthand. Having the ability to verify incidents or alleged footage and photos from afar can help keep people accurately informed even though access is tough.

"It's really hard for journalists to keep track of all this," Noack says, "so such tools are increasingly helpful to explain and help explain to readers ... what's happening on in these countries, and that's something we can all benefit from."