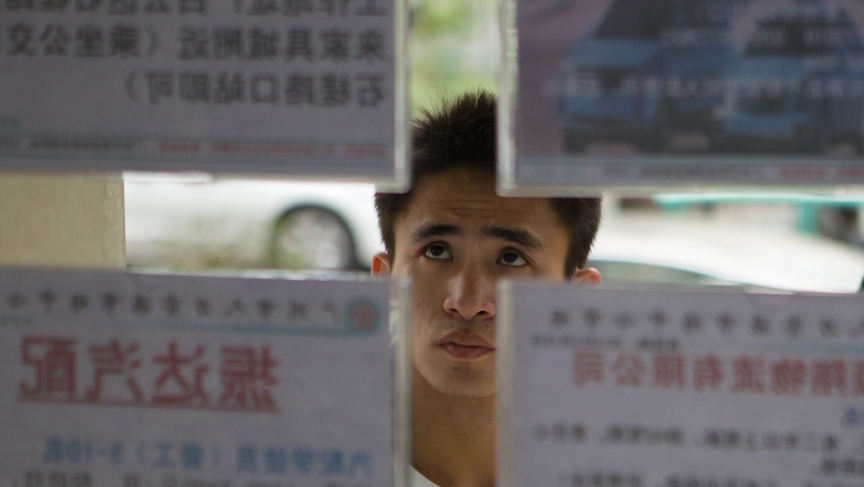 A job seeker looks at recruitment advertisements at a labor market in Guangdong province, where most people speak Cantonese.
Credit:

In the world of "the" Chinese language, there are actually many languages and dialects — and complicated politics to go along with them. Now Beijing has stirred up a fresh dispute over the use of Mandarin, China's official language.

Mandarin is a dialect — in fact, a group of dialects in itself, but let's not go down that rabbit hole — from northern China. It's what you probably think of as "Chinese," and it's been the traditional language of government because it's from the region around Beijing.

Cantonese, meanwhile, is a southern dialect that's considered a protected "minority language" despite the fact that 60 million Chinese speak it. That's about the same as the population of the United Kingdom.

Beijing has a history of pushing Mandarin over local languages, and it recently ordered Guangdong TV, a major Cantonese-language television station, to switch to Mandarin. Guangdong residents are famous in China for their independent streak, and they wasted no time in voicing their opinions over the switch.

“What you see online,” says David Wertime, who reports on Chinese social media for Foreign Policy magazine, “is a lot of pushback.”

It's not clear exactly who issued the order to the state-run station, or how high up the ranks of the central government those orders went, Wertime says. But it happened quietly over the summer, and Cantonese speakers noticed.

“You see a number of comments online that are essentially telling the Mandarin language to 'buzz off,'” Wertime says. “And you see complaints about a 'frog-boiling-in-the-water approach.'”

Wertime remembers such pro-Mandarin efforts going back to his days as a Peace Corps volunteer in China in the early 2000s. “There were signs on the campus on which I taught exhorting students to speak in Mandarin, as opposed to their various local dialects,” he says.

They're billed as efforts to unify the country, but many Chinese see political motives at play. A government plan to send volunteer Mandarin teachers to the volatile northwestern region of Xinjiang, for example, was criticized by exile groups. They saw the effort by Beijing as part of a broader attack on the unique culture of China's Uighur minority in the region, where the locals speak a Turkic language that is distinct from Chinese.

And now, some native Cantonese speakers are suspicious of Beijing's timing. Cantonese is also the lingua france of semi-autonomous Hong Kong, where a determined pro-democracy movement is calling for China's central government to give voters in the territory the right to elect their own chief executive by 2017.