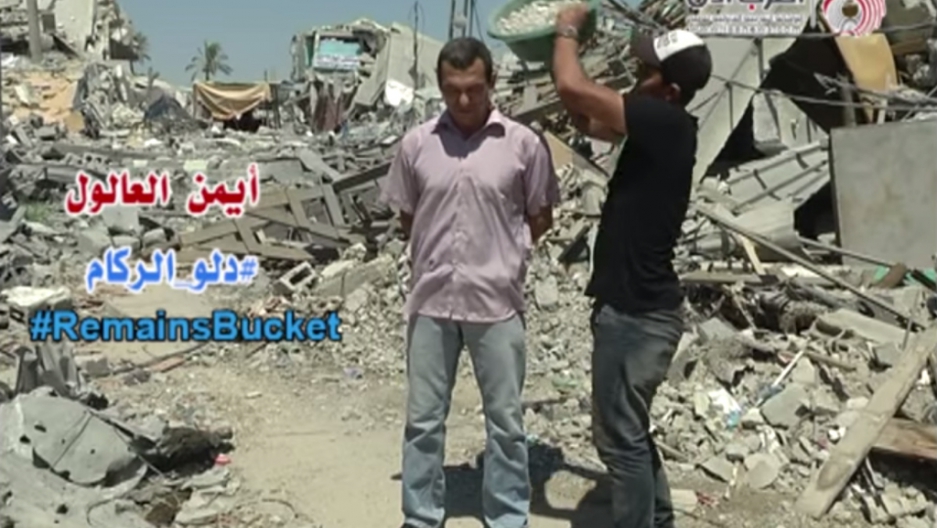 By now, most of us have seen videos of our friends, family members, and colleagues dumping buckets of ice water on their heads in support of Amyotrophic Lateral Sclerosis, or ALS, research. The gambit has raised about $80 million, but perhaps more importantly, it's become a viral marketing tool, raising awareness for a devastating neurological affliction that affects a smaller number of people — and therefore gets less media attention and funding — than cancer or heart disease.

Which leads us to Gaza, where one journalist is hoping his version of the "ice bucket challenge" will get people thinking about the struggles of the Palestinian people. In his video, which has been dubbed the "rubble bucket challenge," Ayman al Aloul implores the international community to help end the suffering. Over the past seven weeks, much of Gaza has been destroyed and more than 2,000 Gazans (along with several dozen Israelis) have died in the latest go-round of fighting between Hamas and Israel.

"This challenge is not for specific people but for all people who sympathize with the Palestinian people," says Aloul, according to the subtitles. "We do not ask for material aid. Anybody who wants to help Gaza should invent his own idea."

Standing amid the wreckage of a demolished building, Aloul looks into the camera and notes that water is tough to come by in Gaza. So, he has a mixture of rocks, sand and construction debris poured over his head.

As of Tuesday morning, the rubble bucket challenge had roughly 4,000 likes on its Facebook Page. And, the hashtags #dustbucketchallenge and #remainsbucketchallenge were trending on social media sites.