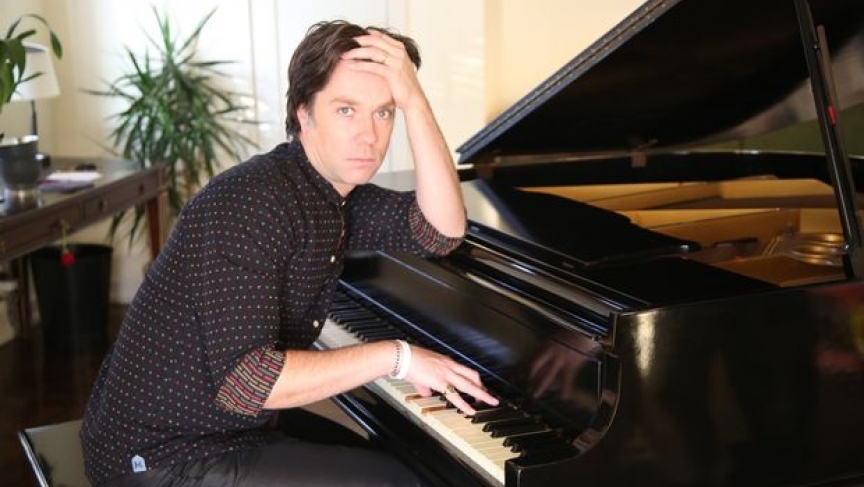 Singer-songwriter Rufus Wainwright has been through it all: A painful coming out in the late 1980s, drug and alcohol addiction, the pressures of being part of a "musical dynasty." But he's still standing, and has just released a new best-of album called Vibrate: The Best of Rufus Wainwright.

When Wainwright started making records in the late 1990s, his sound was unlike anyone else. His songs, sung in a vibrato-bathed tenor, were personal and brutally honest. And he was the first gay pop star to sing completely openly about his sexuality.

That was thanks in part to the music — and drama — that filled his childhood. Wainwright is the son of folk singers Kate McGarrigle and Loudon Wainwright, and Leonard Cohen is the grandfather of his daugher. When he was young, the intense attraction and admiration that fueled his parents’ marriage had begun to sour.

“My mom saw my dad on stage, and then he saw her perform, and there was this real mutual fascination with their artistry and their talent. And then, sadly, that kind of fascination became intense jealousy. It was a fascinating folk breakup,” he says wryly.

“I was born into that,” he continues, “along with [hearing] songs either written about their relationship or myself or my sister. It was all laid out. And then we had friends who were similar, like Richard and Linda Thompson [who also went through a painful breakup].”

He half-jokingly refers to his adolescence as “operatic” — in part because of the intense family dramas he lived through, but also because, as a 13-year-old boy, he fell in love with actual opera. It happened, he says, while listening to a recording of Verdi’s Requiem. “It was an instantaneous transformative experience where I was ‘transfixified,’” he says. “That’s all I could listen to for a good 10 years, really.”

He's already written one opera and is now working on a second based on the Roman Emperor Hadrian and his lover, Antinous. The subject is timely. “What’s interesting about the story of Hadrian is he was actually in love with Antinous, who was another man,” Wainwright says. “And he was persecuted for it. A lot of the same problems that exist today with homophobia and so forth were very much present back then.”

He says the darkness of that opera — and much of his new music — comes in part from his mother, who primarily raised him. He describes her as "haunted by her talent," and her music as having “a certain darkness, a certain depth, a kind of perspective of the outsider ... which makes it so timeless. We all feel abandoned. It’s great.”

Wainwright has had plenty of his own dark moments, but he says he's moved on from the depths of his “wild and druggy" early years. “There’s a point where you have to get off the trolley ride and go see a therapist, and take care of yourself,” he says. “It has nothing to do with art. I think that can actually be a trap, early on, for musicians and other artists.”

He concedes that misery does help at times with songwriting. “But you have to have the energy to write the songs,” he insists. “And as I found out, no matter what state you’re in or what’s going on, you’ll always be served your fair share of misery.”

Now, at 40, he’s been a father for a few years. It's taught him to regard his own father in a new way. “My daughter is three now and she’s at that age where you’re going to get a kiss sometimes and sometimes you’re not going to get a kiss. When she does shine her light on you and says ‘Daddy, I love you’ there’s a nuclear reaction that occurs,” he says.

“I was walking around with my dad and I got to the end of the walk and I hugged him, and I said, 'Dad, I just want to tell you that I love you, because now I know how great that makes you feel when your kid says that.’ I felt it necessary to impart that to him because I’m now begging for it,” he says, laughing — happily.