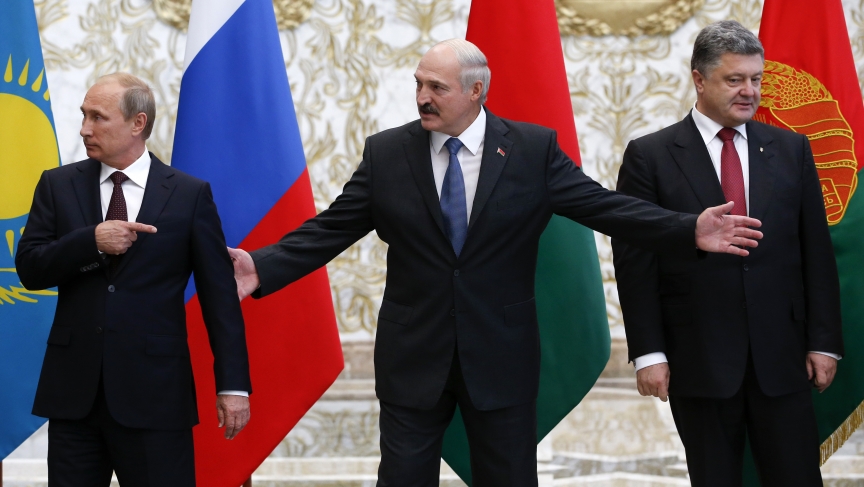 Peace talks are now are underway in Minsk, the capital of Belarus, between Russian President Vladimir Putin and Ukrainian President Petro O. Poroshenko. More than 2,000 people have died during months of fighting between Ukrainian forces and Russian-backed separatists. But can the two parties reach an agreement?

"I think that both sides ultimately want a settlement," says Andrew Kramer, a reporter for the New York Times who's currently in the small town on Novoazovsk near the Russian-Ukrainian border. "The question is what they can both agree upon, and Ukrainians are pressing ahead for a military advantage, at least ahead of the talks that took place today."

Kramer says Ukrainian forces have been pushing back the pro-Russian separatists who once controlled large parts of eastern Ukraine. "There certainly have been signs of Ukrainian success over the past several weeks. Territory that had been under rebel control was taken back," he says.

But those separatists have recently been bolstered by tanks and other heavy weaponry that is evidently Russian. Ukrainian soldiers in Novoazovsk told Kramer that "tanks crossed over from the Russian border through a border post and attacked this town. They were flying the flags of the Donestk People's Republic as they crossed from Russia. ... But nonetheless there was agreement among Ukrainians fighting here that those they were fighting were most certainly Russians."

Kramer agrees with her assessment. "This is opening a new front in the war here," Kramer says, recounting his experience being shelled from the direction of Russia while reporting among Ukrainian troops.

"A large amount of equipment had appeared to the east of the town, in this area previously controlled by Ukraine, the only ready explanation being that it had crossed the border from Russia," he says.

Despite the influx of arms, Kramer believes that the Ukrainians see themselves in a good position: "I think the Ukrainians believe that they have a military victory at hand if there's not more aid coming across from Russia."

State Department spokeswoman Marie Harf told The Takeaway that military aid to Ukraine is not on the table: "What we want to see in eastern Ukraine is not more military action, not more arms, but really the opposite — really de-escalation."

This story first aired as an interview on PRI's The Takeaway, a public radio program that invites you to join the American conversation.