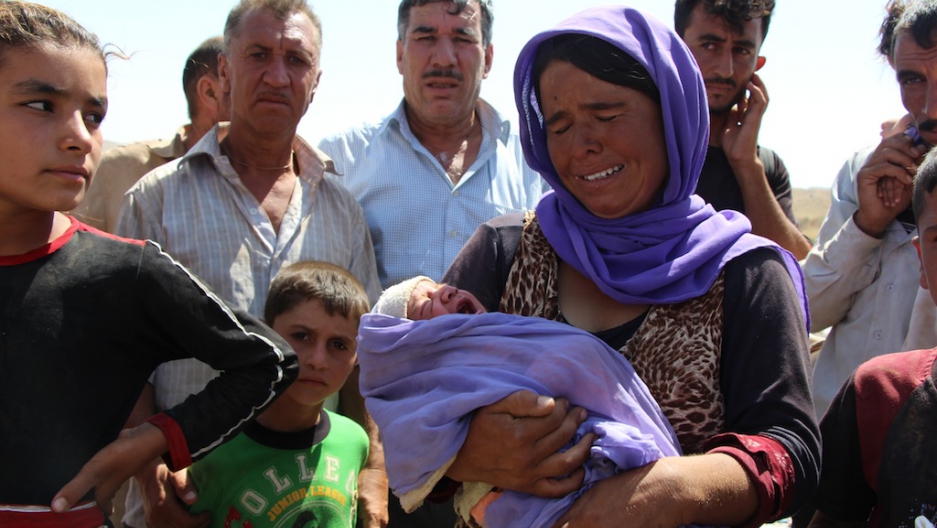 FISH KHABUR, Kurdistan Region, Iraq — In the wake of the brutal murder of American journalist James Foley, hawks in Washington have increased calls for US military intervention in the region as the perpetrators tightened hold of territory in Iraq and Syria.

The Islamic State extremist militant group, which distributed a digital video recording of Foley's beheading to global astonishment last week, seized a stretch of the Sunni areas of northern Iraq in June and consolidated its control of Syria's Raqqa province on Tuesday.

Republican hawks such as Senator John McCain have long called for a more aggressive US military stance in Syria. Defense Secretary Chuck Hagel told reporters that the US may launch airstrikes against areas in Syria controlled by the Islamic State.

The Obama administration said it initiated airstrikes in Iraq on June 8 to protect Iraqis fleeing the Islamic State offensive and to protect the Kurdish Regional Government. Critics say, however, that the administration may be descending a slippery slope, leading eventually to the return of US troops to the region.

Without question, Iraqis fleeing the attacks describe horrific tactics aimed at driving out any religious or ethnic group hostile to Islamic State rule.

Fauzi Ali cried as she described how she was forced to flee the Islamic State attack in the final days of her pregnancy. She and nine Yazidi family members were given the choice of converting to Islam or leaving their village north of Mosul. The extremists have targeted Yazidis for their religious beliefs and forced them to leave without cars, valuables or even spare clothes.

"They attacked our village and killed people, even children," she said. "They took some of the women with them. We were afraid for our lives and left."

Ali gave birth to her son while walking through the Sinjar Mountains. She walked through eastern Syria and then crossed back into Iraq here at Fish Khabur, along with thousands of other Yazidis.

Her family are Kurdish Yazidis, whose religion combines elements of Zoroastrianism and Shia Islam. The Islamic State considers them "devil worshippers."

Aiwa Majdal, who lived in the same village, added, "They said only Muslims have the right to live here, no Jews, no Christians, no Yazidis. Even some of the Yazidis who converted to Islam to save their lives were later killed."

Majdal said many of his Sunni Arab neighbors joined the Islamic State when it attacked Yazidis. For the moment, the organization has successfully used religious rhetoric to divide and conquer this multi-religious, multi-ethnic region of Iraq.

The Islamic State engages in a kind of reverse engineering, according to critics, first deciding who to kill and later finding a religious justification. Militant leaders know they cannot rule areas inhabited by Yazidis, Christians, Shia Muslims and other minorities.

So they wage a psychological terror campaign, killing some and forcing others to flee, according to Kaldo Ohghana, spokesperson for the Assyrian Democratic Movement, a Christian opposition party in the Kurdish parliament.

"They want to establish a caliphate," he said. "Of course they will drive out all people opposed to them. What they are doing is against Islam."

Assyrians are a Christian minority who live in the area in and around Mosul as well as other parts of Iraq. They trace their roots to the ancient Assyrian Empire, which began in about 2500 BCE. They still speak a version of Aramaic, the language of Jesus.

For Assyrians, religion and ethnicity are intermixed.

"Christianity is more than praying in church; it's a way of life," said Oghana. Christians have had a good working relationship with Muslims for centuries. "You have rights, and you should be loyal to your country."

When Islamic State militiamen occupied Mosul in June, they took over the churches and replaced crosses with the black flag of Islam. "They burned some churches and stole everything from others," he said.

Emboldened by that early success, it launched another offensive in early August, driving out Yazidis and Christians, and threatening the Kurdish capital of Erbil, where the local government held a memorial service for the journalist Foley on Sunday.  The Iraqi Army virtually dissolved and the Kurdish military, known as peshmerga, retreated. Many minority groups expressed anger at both armies for collapsing in the face of that assault.

"No one protects this land," said Oghana. "No one is protecting Christians and Yazidis."

The early fighting revealed that the peshmerga, long considered a fierce fighting force, was under-equipped, under trained and politically divided. Rather than comprising a single regional force, the peshmerga is split between the region's two main political parties. The Kurdish Democratic Party (KDP) and Patriotic Union of Kurdistan (PUK) each have their own peshmerga, with their own officers, command structure and supply chain.

The funding is so bad, peshmerga soldiers must buy their own light arms and ammunition. Funds intended for soldiers are siphoned off by corrupt politicians, according to Ali Mehdi Sadiq, a member of the Kirkuk City Council and a leader of the Iraqi Turkmen Front.

"The extreme corruption is an obstacle to building a dependable army," he said.

The Turkmen Front, made up of Iraqis of Turkish origin, has had frequent political clashes with Kurdish leaders.

Kurdish officials acknowledge severe problems with the peshmerga's preparedness but blame outside forces. Hemen Hawrami, head of KDP's foreign relations office, said that Baghdad refused to share any of the $15 billion in US military aid provided to the Iraqi government since 2003. And the US refused to send direct aid to the Kurdish region on the grounds it could promote separatism.

"We do believe that keeping this One Iraq policy has proved wrong," Hawrami said. "We've been asking [the US] to arm the peshmerga for the last 10 years. If the US had supported the Kurdistan Region and the peshmergas, we would not have reached the situation right now."

Attitudes changed after August 8, however, when the US conducted airstrikes against the Islamic State in northern Iraq. The CIA and Pentagon have also rushed arms from Baghdad to the Kurdish region in an effort to bolster the peshmergas.

On August 19 the peshmergas and Iraqi special forces, backed by US airstrikes, retook the Mosul dam, which had been captured by the Islamic State.

Future military success remains in question, however, as US air strikes have a limited impact against irregular fighting forces like the Islamic State, according to a high-level US diplomat.

The diplomat, who declined to give his name in keeping with US policy, said the peshmerga are capable of recapturing Islamic State territory taken from the Kurds.

However, retaking Mosul and other cities in the Sunni Arab heartland will be far more difficult, he said. It will require US airstrikes, disciplined Iraqi Army forces and a competent civil administration to rule the area after the fighting stops. Asked whether that could happen without participation of US combat troops, he paused for a very long time.

Then the diplomat shrugged his shoulders and didn't answer.

Reese Erlich is a special correspondent for The GroundTruth Project. His latest book is "Inside Syria: the Backstory of their Civil War and What the World Can Expect," published by Prometheus Books.