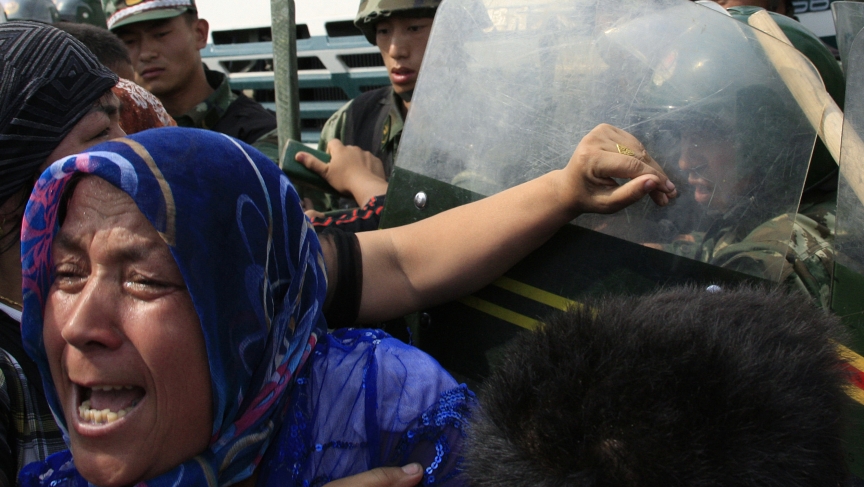 A woman pushes at Chinese paramilitary police wearing riot gear as a crowd of angry locals confront security forces on a street in the city of Urumqi in China's Xinjiang Autonomous Region on July 7, 2009.
Credit:

There's a long history of tensions between Chinese authorities in Beijing and the Uighur people of Xinjiang, a province in the remote far west of China. In recent weeks, a local imam who supported the Chinese government was stabbed to death outside a mosque in the city of Kashgar along the ancient Silk Road.

The province has been called China's Ukraine, but it also has a tradition of violent confrontation with Beijing not unlike the Russian experience in Chechnya. In the past year, more than 100 people have been killed in violence in the territory.

Uighurs are a Turkic people who are overwhelmingly Muslim, and Jonathan Fenby, the author of “Will China Dominate the 21st Century?,” says “the Chinese fear is that Islam acts as a recruiting ground and a kind of glue for anti-Chinese elements and they see it as a political religion.”

Uighurs believe that the Chinese government is using such security fears to try and suppress their culture and religion, something that Fenby sees in Beijing's rhetoric. Islam is not prohibited in China, and there are mosques throughout the country. But practicing the religion is discouraged by the government. "China's mantra is these are backward places with backward civilizations and cultures," he says.

That attitude filters down to the population as well. "Most of the people living in Han China — China proper — have a pretty low opinion of of the Uighurs," Fenby says. "I've never come across a Han Chinese who talks about independence or autonomy of Xinjiang. For them, this is part of China, and it's always going to remain so."

Depsite those attitudes toward Uighurs, there are now many more Han Chinese within Xinjiang itself. Fenby says that's part of an attempt by Beijing to aggressively to dominate the Uighurs through military force and the migration of Han Chinese, who now make up about 40 percent of the total population of the Xinjiang province.

"When I visited [Kashgar], it was still very much a Central Asian, Muslim, Islamic city, with very few Han Chinese to be seen," he remembers. "Now recently, the Chinese authorities have been bulldozing the old parts of Kashgar and building modern apartment buildings there."

The Chinese government argues that rebuilding Kashgar to be a 21st century city helps the local people, but that's not how the Uighur people feel. They believe these new developments deny them their cultural heritage, which stretches back 1,000 years or more.

Xinjiang hasn't always been considered part of China, and was home to Mongol and Turkic states for centuries. Even today, it's officially an "autonomous region" rather than a province. But Xinjiang province is also strategically important to China. According to Fenby, the region has reserves of oil, gas and coal, something Beijing has been focusing on while also trying to build the region's economic potential.

And that means the kind of attention from Beijing that Uighurs are hoping to avoid. "The Chinese approach is a mixture of stick and carrot," says Fenby. "There's a heavy security presence, and that's been beefed up since riots [broke out], which killed 200 people three years ago. Xi Jinping, the Chinese leader, on a visit to the region earlier this year, spoke a pretty harsh law-and-order security message."

It hasn't been all negative, with some development money coming into the region. "Despite the repression at the moment and the violence, China has still been putting money in, to expand education and set up a new university," he says. "Under the previous Chinese leader, Hu Jintao, there was a definite attempt to encourage investment and build up the economy there."

But again, Fenby says, the stick is very much in play: "On his visit to Xinjiang, Xi Jingping said something along the lines of, 'Well, you're not going to get any investment unless you've got security.'"

For now, Fenby says, violence by Uighurs has been "primitive," consisting of unsophisticated and uncoordinated attacks. But China says more sinister tactics may be on the horizon. "There have been reports that about three dozen Uighurs from Xinjiang are fighting with the ISIS forces," he says. "The fear there is that they will be trained by ISIS and then will go back to Xinjiang and do their fundamentalist there."

Is that fear justified, or just a scare tactic from Beijing? "Many observers have long been puzzled that Islamic groups in the greater Middle East haven't forged stronger, more militant bonds with China's Uighurs," writes Howard French, a former Shanghai bureau chief for The New York Times, in an email.

But as far as real evidence of an ISIS connection goes? "I haven not seen anything persuasive about this at all."