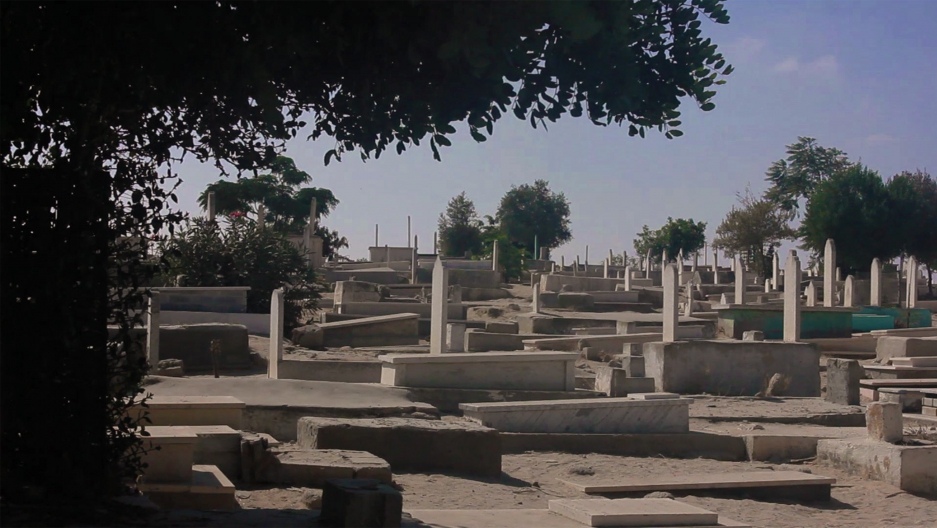 GAZA CITY — Cemeteries are becoming the most dangerous places in Gaza.

The Israeli military has targeted both of Gaza’s primary burial grounds on six occasions over the past week, alleging that they'd received intelligence that rockets were being launched from the areas.

On Saturday, local residents say the cemetery north of Gaza City was targeted, though no injuries were reported.

On Thursday, four people were killed at the Shekh Radwan Cemetery in the middle of the city around 10 a.m. At least two of the victims were gravediggers who were preparing graves for people killed the night before during Israeli air strikes.

One of those victims was Awsam Ta’Fesh, 43, who had been working as a gravedigger for five years at Shekh Radwan. His wife An'am said he had been regularly digging graves for victims of the most recent violence between Israel and Hamas.

Ta'Fesh was buried in the very grave he had been preparing for another man.

More than 2,000 Palestinians have been killed in the most recent fighting between Israel and Hamas, which is now in its seventh week. Most victims have been civilians. Sixty-four Israeli soldiers and four civilians in Israel have been killed.

Ta'Fesh's wife An'am said she heard an explosion Thursday, as her home is near the cemetery. She rushed outside to ask neighbors what happened and learned her husband had been hit. “He was just digging graves. Before the siege, he was a builder,” she said.

But when jobs became scarce, digging graves suddenly became more attractive. The cost to bury a family member is about $200.

An’am said her husband, when he did have time off, spent most of it with their four children.

Ta’Fesh’s father said he was listening to the radio when he learned of his son's death. “May he rest in peace, I release him to God,” he said.

Meanwhile, the family of 23-year-old Salem Abu Ghadayen mourned their own loss.

Ghadayen didn't normally dig graves but would often help Ta’Fesh for some extra money. When two of Ghadayen's friends were killed in Gaza blasts, he went to the graveyard to help prepare for their burial.

His sister, Entesar Abu Ghadayen, said her brother was a good kid, "popular and loved by everyone.” She said an Israeli drone targeted them without reason.

Salem's brother Fadel Abu Ghadayen says he was at the cemetery when the explosion happened. He rushed over to his brother, who had been hit, calling out for help.

"He was badly injured and I started to ask for help. I tried to pull him out of the cemetery. When a second missile targeted another man, I went out into street to ask for help. It was 30 minutes before the ambulances came,” said Fadel.

Ghadayen's father was distraught on Saturday, standing outside the family home, wiping tears from his eyes with weathered hands. He said his son would often drive the donkey carts stocked with produce to sell in the community and would do odd jobs. He was well liked. “God gives and God takes away,” he said, adding that he hopes for peace “for all Muslims.”

Salem's sister Entesar was more impassioned. She said she hoped Egypt and Israel go to war so they would know how the Palestinians feel. She said both had the power to help them but did not. “What weapons do we have?,” she asked, “We don’t have nuclear weapons.”

Entesar said her family is now staying at a friend's because their home is too close to the cemetery and they fear for their lives.

At the cemetery in northern Gaza on Saturday, children crowded around a hole in the ground. They said that's where the Israeli bomb hit. It came from an F16 aircraft, they said. Trash and glass were strewn about.

The Israeli military said they received intelligence last week that “rockets were being launched” from Shekh Radwan Cemetery, according to a spokesperson. They could not confirm the bombing on Saturday.

Israeli military spokesperson Lt. Libby Weiss said the military attempts to warn residents of their activities in order “minimize strikes on civilian people.” Leaflets were dropped from the air on Saturday. Groups of people on the street picked up the fliers and were also seen dropping them in the street.

The flyer was written in Arabic and warned Palestinians “any military building or civilian building that is involved in terrorism operations against Israel” would be targeted. It asked residents to leave their homes. The military spokesperson said they hope to “shed light” on what they are doing and prevent further casualties.

Since the blasts, the cemeteries have been eerily quiet.

Palestinians normally investigate a site after a bombing, but now everyone is too frightened to enter the cemetery, where blasts can be louder than in other parts of the city.

Funerals over the last few days have been scarce. Even the gravediggers are wary.