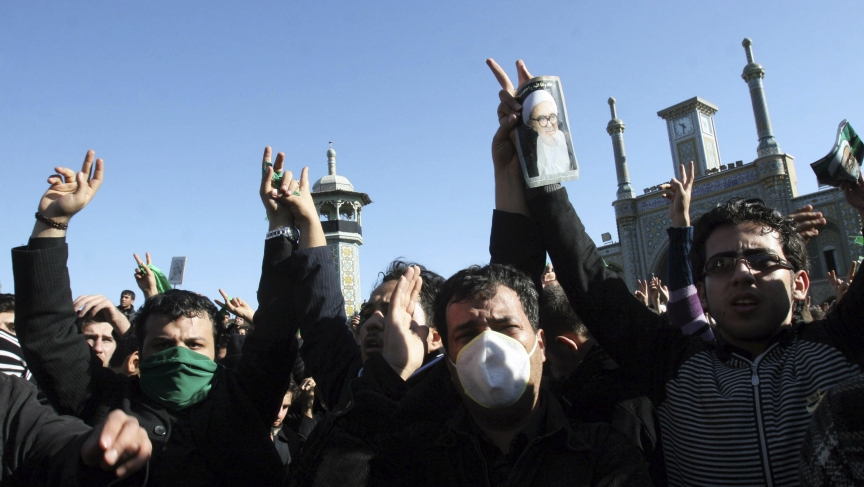 People wear green bands in support of the Iranian opposition movement during the funeral of dissident Iranian cleric Grand Ayatollah Hossein Ali Montazeri in the holy city of Qom on December 21, 2009.
Credit:

Iran's hardline parliament on Wednesday voted to sack Reza Faraji-Dana, the country's minister of science, research and technology, during a parliamentary impeachment session. Some Iranian obesevers are calling it the first major political clash between the conservatives and reformists since Hassan Rouhani, considered a moderate, took over the presidency last year.

“The parliament is cooperating with the Rouhani administration, but MPs are sensitive to issues associated with the sedition," said Gholam Ali Haddad-Adel, the head of Iran's conservative Principalist bloc. That "sedition" is the Green Movement, a series of huge protests surrounding the 2009 Iranian presidential election. Many Iranians believed the vote was rigged for hardliner Mahmoud Ahmadinejad, who won re-election.

The protests, which brought millions of Iranians into the streets before they were brutally suppressed, still resonate in Iranian politics. A total of 145 members of parliament gave Faraji-Dana a vote of no confidence, while 110 voted in support of him and 15 abstained, illustrating the divide between hardline and moderate members of Iran's parliament.

During the impeachment session, a number of lawmakers accused Dana of being an extremist. He was criticized for allowing university students who were expelled because of the 2009 protests to return to school, as well as hiring employees not approved by Iran's Ministry of Intelligence.

Iran's hardline newspapers condemned the alleged “extremism." One tweet from conservative website Mashregh News featured the front pages of Vatan Emrooz and Kayhan, both well-known and widely read newspapers in Iran. Vatan Emrooz is a conservative newspaper with strong ties to both the Iranian Revolutionary Guard and former President Ahmadinejad. Kayhan's management and editorial policies are known to be directly associated with the office of the Supreme Leader Ayatollah Khamenei:

The hashtag  #استیضاح — the word means "impeachment" in Persian — has trended on Twitter as news and commentary of Faraji-Dana's sacking was shared on social media.

Many reformists, such as former President Mohamed Khatami, have come to Faraji-Dana's defence, claiming his disassociation from from the events of 2009:

“I can testify that #FarajiDana is in no way involved in acts of political opposition #university #impeachment.”

President Rouhani himself was absent during the impeachment. After the vote, he issued a neutral statement praising Faraji-Dana's leadership of the ministry: "He put his utmost effort in expanding science and knowledge and creating a relaxed atmosphere within our universities.”

Moderate politicians, especially those associated with Iran's reformist factions, have tried to concentrate on electing a more reform-minded parliament in the 2016 elections. Mohammad Reza Aref, a 2013 reformist presidential candidate, told the reformist Etemaad newspaper that Iranian youth and students need to correct the parliament's decision by ensuring victory in 2016: "We do not want to challenge the system, but to enter the election through the constitutional framework. The real fight is against those who do not want to participate in the elections.”

This story by Mahsa Alimardani was originally published on our partner Global Voices Online, a community of bloggers from around the world.