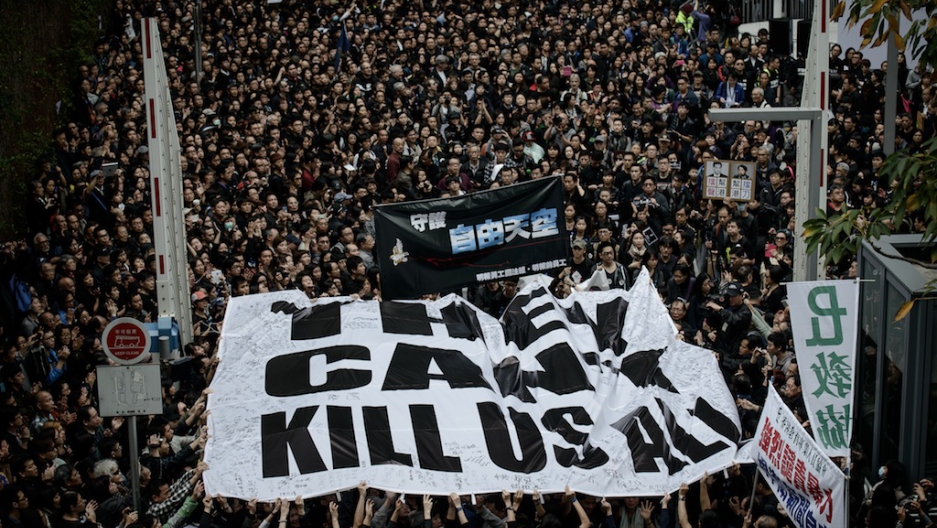 Protesters display a large banner during a rally to support press freedom in Hong Kong on March 2, 2014. The rally was staged following the attack of a former editor of local liberal newspaper which comes at a time of growing unease over freedom of the press in the southern Chinese city, with mounting concerns that Beijing is seeking to tighten control over the semi-autonomous region.
Credit: PHILIPPE LOPEZ
Share

What began as a bad week for journalists became a tragic one.

First, journalists who were reporting on the police shooting of unarmed black teenager Mike Brown in Ferguson, Missouri, were arrested, intimidated and confined to a designated parking lot several hundred yards away from clashes between protesters and police. At least 17 journalists have been arrested while covering the story.

And then, on Tuesday, Aug. 19, the Islamic State announced that it had executed American journalist James Foley, who'd been missing for close to two years after being kidnapped from Syria while reporting for GlobalPost. The militants released a video of Foley's beheading, which US intelligence determined to be authentic. The world was outraged and heartbroken.

This impossibly sad moment offers a time to step back and reflect on the threats and challenges journalists face around the globe.

This chart lists the ten best and worst places to be a journalist today: These numbers offer a snapshot of the present moment, but they don't tell us where things are getting better and where they're getting worse. The time-lapse maps below tell a more complicated story. We used data from RSF indexes over the past 12 years to create animated maps that trace how the landscape of global press freedom has transformed over time. In the text that accompanies each graphic, we've chosen to highlight violence against journalists, specifically.

In its 2014 index, RSF notes several global trends that are affecting journalists.

At the top of the list are militant groups that target journalists. The 2014 index points to militias in Libya, Yemen, Somalia, the Democratic Republic of the Congo, and the Islamic State as groups that consider journalists enemies and which "use violence against news providers as part of their drive to control the regions they 'liberate.'"

Organized crime is another "fearsome predator for journalists," according to the report, particularly in Honduras, Guatemala, Brazil, Paraguay, Pakistan, China, Kyrgyzstan and the Balkans.

The last major threat RSF highlights is a growing tendency among Western industrialized nations "to interpret national security needs in an overly broad and abusive manner to [the] detriment of the right to inform and be informed" — most notably, the US National Security Agency's data collection programs revealed by former contractor Edward Snowden.

The United States fell 13 places in the ranking in 2014, mainly due to its treatment of NSA whistleblower Snowden and Chelsea Manning, who provided classified information to WikiLeaks. In Guatemala, the number of violent attacks against journalists doubled. The same was true for Paraguay, where "the pressure on journalists to censor themselves keeps on mounting." In Honduras, "more than 30 journalists have been killed in the past decade, 27 of them since June of 2009."

Violence against journalists declined in Bolivia and Ecuador this year, but RSF warns that "in Ecuador the level of media polarization is still high and often detrimental to public debate." Brazil faces serious criticism from RSF. Since 2013, five journalists have been killed in the country. "Brazil has become the Western Hemisphere's deadliest country for media personnel, the position held until then by Mexico, a much more dangerous country," RSF says.

Europe's biggest issues are in Eastern Europe, particularly the Balkan region. The lowest-ranking country in the EU is Bulgaria, where "reporters were repeatedly the victims of police violence during demonstrations calling for the government's resignation." Russia maintains its tradition of stifling the press for most of the 12 years covered in the graphic. Turkey is now at a crossroads, according to RSF: "Around 60 journalists were in detention at the end of 2013, making Turkey one of the world's biggest prisons for media personnel. Despite directives intended to limit use of provisional detention, journalists often spend months if not years in prison before being tried."

Press freedom in the Middle East has declined either due to the actions of militant groups, such as the Islamic State, or due to government attempts to control the press during and after the Arab Spring. RSF says that from March 2011 to December 2013, nearly 130 news providers (including professional journalists) were killed in Syria. Nineteen foreign journalists were detained, held hostage or went missing. The governments in Bahrain, Tunisia, and Egypt have all been suppressing the media, as well.

Central Asia has a different problem, according to RSF: "The former Soviet republics that most violate freedom of information — Turkmenistan, Uzbekistan, Kazakhstan and Azerbaijan — are subjected to little pressure from the international community for the simple reason that they are rich in oil and gas deposits, and pipelines."

War and terrorism have severely hurt the press in many African nations and regions. "These problems impact the flow of news and information," says RSF. "Because of the dangers, journalists find it increasingly difficult to access the terrain of military operations." In Somalia, journalists have frequently been targeted "as unwanted witnesses of its terrorist methods." Somalia is Africa's deadliest country for journalists.

China has never wavered in its censorship of the press, and the media environment got even worse there last year. In September 2013, the Chinese government issued Decree 72, which banned "the use of blogs and social networks to share information about news developments."

Governments in the Asia-Pacific region, even the democratic ones, "can be extremely sensitive to criticism." Thailand used lese-majeste charges — offenses to the dignity of the sovereign — to silence government protesters. In South Korea, two journalists were accused of broadcasting "false information" and "defamatory content" about the president. The alleged defamation happened during the duo's satirical podcast.