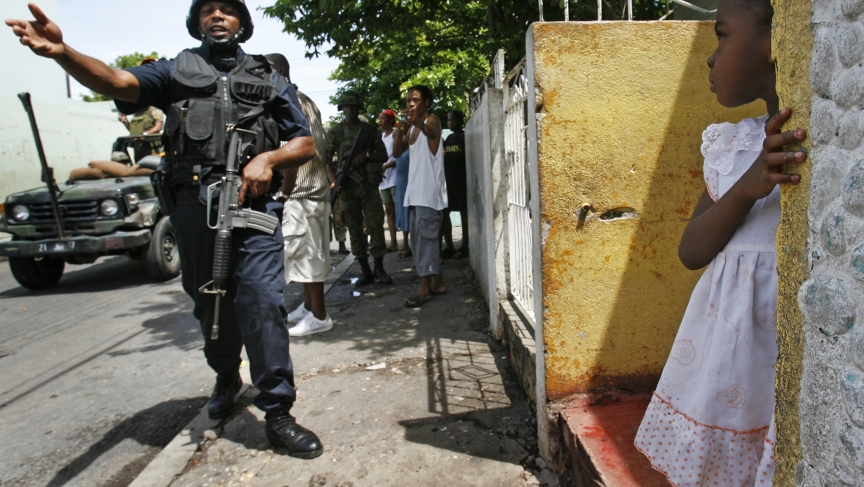 A police officer patrols the street as a little girl watches from her doorstep in the Tivoli Gardens neighborhood of Kingston, Jamaica, on May 27, 2010.
Credit:

The death of Mario Deane, a young Jamaican man who was arrested for marijuana possession and beaten while in police custody, has touched off a new round of criticism of Jamaica's police.

Three men — Deane's cellmates — have been charged with beating him to death because of a dispute over sleeping accommodations. One of the men is hearing impaired and another is schizophrenic, according to his family.

Police say they were alerted to a fight in the lock-up and found Deane with multiple injuries, including stab wounds. They took him to the hospital for treatment, but he later died. Six officers have been suspended pending further investigation, and Deane's family has already signaled its intentions to file a wrongful death lawsuit against the police.

The case fueled protests in the streets and online in Jamaica, with some commenters drawing comparisons with demonstrations in Ferguson, Missouri, over the killing of 18-year-old Michael Brown.

March for JUSTICE going on now in the US for Mike Brown. When are we going to march for Mario Deane?

Jamaica has a long history of police brutality and other similar forms of violence. On Facebook, blogger Annie Paul mentioned a report on the radio station Nationwide about reggae star Peter Tosh, who says he was beaten by police in 1972:

Brilliant. Nationwide plays excerpt of Peter Tosh's account of the vicious beating police gave him, showing history of police brutality here. Apparently Herbie Miller [Tosh's then-manager] sent them the clip…v useful to remember how far back police abuse has been going on…and how little anything has changed.

You can listen to the report and Tosh's account of the incident.

Video-blogger QuitePerry also shared his thoughts in a video titled “I Am Mario Deane”:

In the last 20 years in Jamaica, at least 200 people have been killed each year by police. This is not an average. 200 is the lowest number killed in any given year. In some years the figure is actually much higher than that.

To put this into another statistical context, let us consider the UK – a country with a population 23 times higher than Jamaica’s. The UK does not report police killings 23 times more than Jamaica’s. Over the last 20 years a total of 1433 people have died after having had some manner of contact with British police. That’s 71 a year. But in fact, only 55 of the 1433 have been police shootings. The others died while in police custody or sometimes as the result of a high speed chase. 2.5 people shot and killed each year by police in Britain. Stop to consider that for a while.

Dennis Chung at Caribbean Journal writes that the case was just another example of the police failing to take responsibility. Their “response was to first deny culpability and then charge two persons, with no apology. It took the ministers of Justice and National Security, the acting commissioner, some politicians, [the Independent Commission of Investigations], and civil society to express outrage and apologise. Still no one from Barnett Street, from what I know, has issued any statement of apology,” he wrote.

Chung added that there can be no meaningful economic development without social justice:

Whenever there is no social justice, it results in lost opportunities and wasted talent. It also results in wasted productive hours, as instead of cleaning up the mess caused by some functionaries of the state, we could be planning how to increase agricultural and other production.

Many Twitter users felt that Mario Deane's death exposed the problems not only within the police force, but in Jamaican society as a whole:

mi ah "young bud" but how many issues in this country have exposed the WEAKNESSES of the police like #MarioDeane death?

Is there an economic case for #PrisonReform ? Is it so far outside the imperatives of economic development? #MarioDeane

Where are the church groups over beating of Mario Deane? We as Christians need to take stand against every immorality and not just some.

The rise of social media has made incidents of police brutality harder to sweep under the rug, and there is pressure on the government to provide justice for Mario Deane and to reform the Jamaican constabulary.

This story by Matthew Hunte was originally published on our partner Global Voices Online, a community of bloggers from around the world.