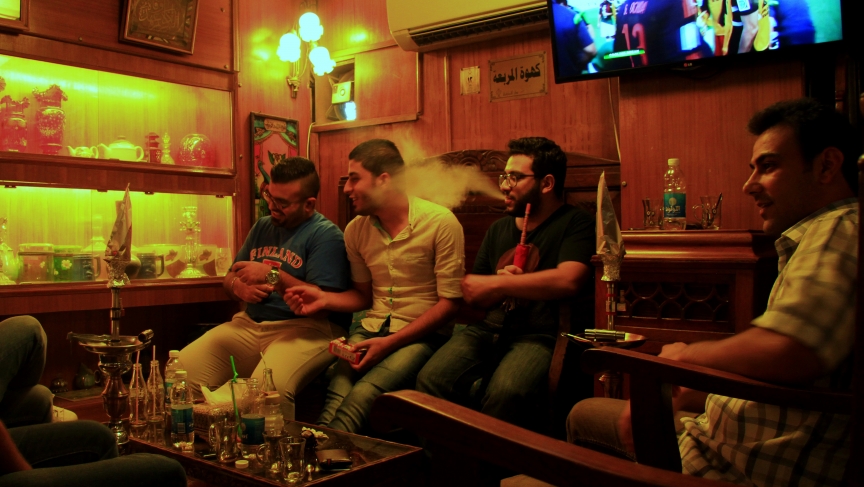 A table of young men at the Al Atrakchi House cafe in Baghdad's Mansour neighborhood is decorated with antique Iraqi furniture and artifacts. The owner says he has created this space to remind Iraqis of their country's rich history in hopes they'll be inspired to work to improve the future.
Credit:

Outside the doors of the Al Atrakchi House cafe is a typical Baghdad street: dusty, garbage-strewn, one end blocked off by a barbed wire checkpoint. Inside, though, is a world away: crammed full of books and antiques, being here feels like walking back in time and that’s exactly why this group of young men like it.

“When I read in the history of Iraq, for example, the libraries and the education and the lifestyle about Baghdad in the 70s, I was jealous actually,” says Ali Makhzomy.

Makhzomy and his five friends — all in their 20s — are sitting around a low table smoking water pipes and drinking sodas. All of these guys say this is the Iraq they’re trying to recreate: a country that’s highly educated, tolerant, safe and, most of all, one that promises young people a future.

Iraq is a very young country — more than half of all Iraqis are under the age of 20. But as most of the country is gripped by violence and instability, opportunities for young Iraqis are evaporating, and more and more are emigrating abroad.

This group of friends say they’re determined to break that trend:

“It’s good for the individual,” Makhzomy says reluctantly of those young people emigrating abroad. “[They] will build [their] future, but in general with my perspective or my opinion, it's selfish a little bit to leave Iraq.”

Makhzomy says almost all of his friends — well educated, young, ambitious Iraqis who can travel — they’ve all left to build a life abroad. He says he wants young Iraqis to stay, to help counter extremism and corruption.

As the conversation in this dimly lit cafe drifts, talk comes back around to the events unfolding in Mosul, just a few hours drive north of here. Most of these guys are disgusted by the Sunni militants calling themselves the Islamic State, especially their treatment of minorities.

Eventually, the chatter comes back around to what they see as the source of all Iraq’s ills: government corruption.

“The government, they have to forget about corruption now, but they can’t, unfortunately,” Makhzomy says.

“Its in their blood” says Ali A’Bawii, interrupting with a laugh.

“After 10 years, they’re used to it,” A’Bawii explains. “It’s just like when you get addicted to everything, like alcohol or weed, you’re just like ... you’re just used to it.”

One of the other guys in the the back of the room jokes about Iraq's politicians. "They smoke corruption,” one of them jokes. Everyone laughs.

A’Bawii is a university student. Despite all the violence, universities in Iraq are still open. He says it’s the violence, the corruption and the general instability that has driven most of his friends to leave.

“I’m one of the people who went on the scholarship and came back to Iraq and now my mom is hating me more and more,” says Hyder Shakrii, another guy seated at the table. He says his mother is the person pressuring him the most to move away. His parents and their whole generation, he says, they’re done with Iraq. They say it’s doomed, that the country is finished.

Makhzomy says he gets it — with Iraq’s violent past, it’s easy to lose hope.

“Yeah, I was born in war. I grew up with another war and I live now with another war,” he says. It was the same with his parents, they also only knew war. But the difference, he says, is how he was educated.

From a young age, Makhzomy says he always read history and he’s seen that in Iraq’s past the country has gone through difficult times and recovered. That, he says, is what gives him hope for the future and makes him want to stay.

Most of the guys here can’t quite explain why they’re hopeful amid such hopelessness. Some say they can’t imagine being any other way. Others say they like the challenge: leaving would be the easy way out.

Makhzomy says he knows that staying in Iraq doesn’t ensure that anything will change, but, he says, it’s a start.

“We don’t have the power, we are not the decision makers but ... we are doing actually what we can do,” he says. “That’s it.”