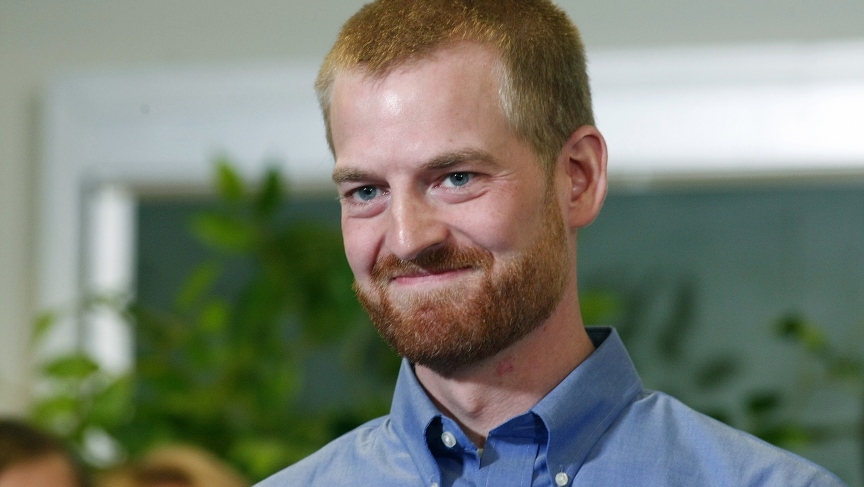 Kent Brantly, who contracted the deadly Ebola virus, smiles during a press conference at Emory University Hospital in Atlanta, Georgia. Brantly, and a second American aid worker who contracted Ebola in Liberia, have both recovered and were discharged by the Atlanta hospital, which treated them with an experimental drug.
Credit:

Until recently, there's been little positive news about the deadly Ebola outbreak in West Africa. But now there's one hopeful development: Two Americans, Dr. Kent Brantly and aid worker Nancy Writebol, have been cured of the disease

"They are Ebola-free. They do not have the Ebola virus in them anymore," says Anthony Fauci, director of the National Institute of Allergy and Infectious Diseases. "They're of no danger to society, their family, or to the people who come into contact with them."

Fauci says doctors at Emory University Hospital in Atlanta are absolutely certain that the two Americans are free of the disease. "We have very, very sensitive molecular probes that probe for the virus in the blood. ... And so you you examine blood, stool, urine, a variety of bodily fluids until it's clear of the virus." And now that they're "clear," Fauci says, that means their immune systems have essentially taken over and can now protect them from that particular strain of Ebola.

Brantly and Writebol contracted the diease while working in Liberia, one of the West African countries where Ebola has killed more than 1,200 people so far. Their cases earned worldwide attention because they were treated with ZMapp, an experimental cocktail of antibodies. It consistes of proteins that the body usually makes but, in this case, are artificially produced.

Their access to the drug, which is not fully tested or in production, sparked anger because of the appearance of Western privilege. Many people argued that experimental drugs like ZMapp shouldn't just be given to Westerners — they should also be deployed in crises to see if they can stop the deaths of already-desperate people. But Fauci says no one is sure if ZMapp is actually what saved the Americans.

"We really cannot tell whether the specific therapy that they received made any difference in their clinical course and there's a lot of misinformation about that," he says. "We don't know if it had no effect, if it had a good effect or whether, paradoxically, it could have delayed their recovery." He points out that ZMapp was given to a Spanish priest who was air-evacuated a few weeks ago from West Africa, but still died after he returned to Spain.

In fact, Fauci believes that the first-class medical care the two Americans received at Emory University Hospital contributed the most to their recovery. "The critical issue is good medical care with good healthcare providers, with the predominant intervention being the replacement of fluids," says Fauci.

People suffering from Ebola rapidly lose fluids because of diarrhea, vomiting and even some bleeding. Fauci says the real life-saving therapy is replacing those fluids intervenously: "If you can do that and keep people alive, the natural immune system that the body generates against the virus ultimately clears the virus."

Unfortunately, that's not so simple in the three West African countries affected by the current Ebola outbreak. "The conditions that are there in-country, in those West African countries — it's remarkable that they're doing as well as they can," Fauci says. Nearly 50 percent of people who have contracted this strain of Ebola recover, even in West Africa. That's despite the fact that countries like Liberia and Sierra Leone "have no real good infrastructure for health care. They have minimal ability to do isolation, to do contact tracing, and to have the equipment to safely take care of people."

For Brantly and Writebol, meanwhile, the future looks bright. "They just need to recover from a serious illness," Fauci says. "I'm sure it wore them down terribly, despite the fact that Dr. Brantly looked pretty good at the press conference on TV. But going through an Ebola infection is not something you take lightly and I'm sure he'll take some time to fully recover."