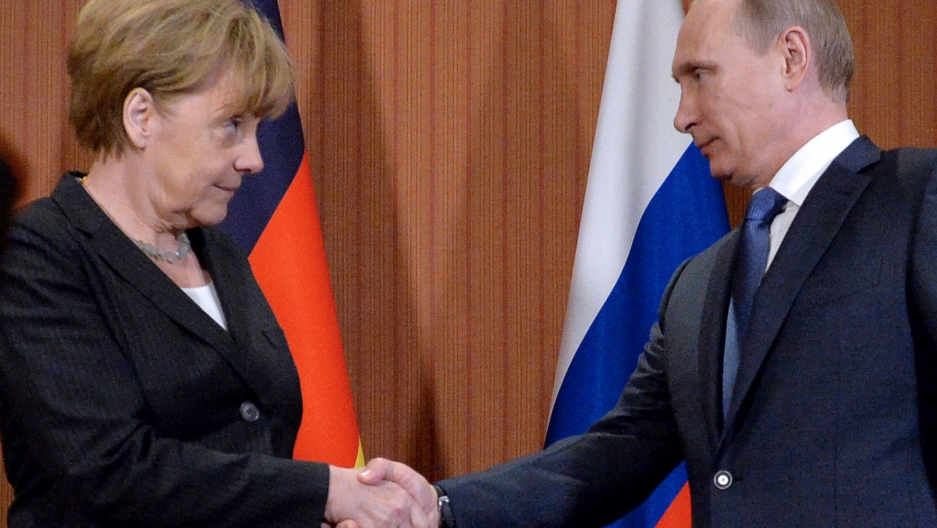 BERLIN, Germany — The last time Angela Merkel visited Kyiv, she was there to explain why she'd opposed a US initiative to put Ukraine on a path to join NATO.

That prospect was provoking fury in Russia, which invaded neighboring Georgia over that country’s aspiration to do the same.

This Saturday, Merkel’s agenda promises to be very different.

A longtime proponent of engagement rather than confrontation with Russia, she will meet with Ukraine’s President Petro Poroshenko on Saturday in a clear sign of Germany's mounting support for his country's European ambitions.

The difference between now and six years ago is Russian President Vladimir Putin’s betrayal of Merkel’s trust by breaking promises to de-escalate the crisis in Ukraine, after he annexed Crimea earlier this year and followed with support for pro-Moscow rebels fighting an insurgency in the country’s east.

Last week, negotiations in Germany between foreign ministers failed to end the crisis as Russia reportedly refused to stop or even acknowledge its support for rebel fighters in Crimea.

Merkel will travel to Kyiv just days before Poroshenko and other European leaders will meet with Putin in Minsk on Tuesday.

In that context, the visit is perhaps the strongest signal yet that concerns about Germany’s economy — slowing thanks to European Union sanctions against Russia — won’t derail the dramatic transformation underway in German-Russian relations, says Stefan Meister of the German Council on Foreign Relations.

“We are in the process of a fundamental change in how we see Russia,” he said in a telephone interview. “You have to understand the policy of the last 20-25 years has failed.”

That policy, marked by regular personal interactions between Merkel and Putin, was intended to nudge and cajole the former communist state to adopt democratic reforms through ever-greater economic ties.

But as the Ukraine crisis has escalated, especially after the downing of Malaysia Airlines Flight 17, Merkel has steadily taken an ever-stronger stance and now appears to have won support for broad economic sanctions from the once-reluctant German business community.

In May, the chief executives of BASF, Siemens, Volkswagen and Adidas were lobbying aggressively to prevent stiff sanctions against Russia.

But even as the latest economic data revealed deep cracks in the European recovery last week, the tenor of comments from the business sector, along with public opinion, has begun to change.

The economic data has driven home the idea that stagnation in investment driven by uncertainty in Ukraine is more damaging than any direct blow to trade with Russia, says the Kiel Institute's Klaus-Juergen Gern.

“At the moment, the feeling is that without some kind of sanctions, the Russians would not give in and the crisis will go on for a very long time,” he said.

At the same time, a recent poll conducted by Infratest Dimap on behalf of broadcaster ARD showed that 70 percent of ordinary Germans now favor tougher sanctions, and that 82 percent no longer view Russia as a trustworthy economic partner.

Acting on such views is coming with a price.

The Federal Statistics Office warned that the economy was “losing momentum” even before the impact of current sanctions against Russia.

And the German Chambers of Commerce recently said the economy is on “a dangerous path,” with a projected $15-billion shortfall in exports expected to put some 100,000 German jobs at risk.

That makes recession almost inevitable. Ongoing strife in relations with Russia could also do irreparable damage to key sectors of the legendary Mittelstand — the small and medium-sized export firms that drive Germany's export-oriented economy — says Monika Hollacher of the German Engineering Federation.

“The mere threat of sanctions has already led to German companies losing many commissions,” she wrote in a recent article. “Sanctions will only accelerate this negative development. Long-term supply relationships and mutual trust between trading partners will potentially be damaged.”

In the past, German machine companies could stave off cheaper Asian competitors thanks to longstanding business relationships and the sterling reputation of German engineering.

However, now those advantages have been virtually eliminated, says Alexander Loktev, a sales agent for German engineering companies in Russia.

“We've already received inquiries from some customers asking us to look for machines from Asian producers,” he said.

It’s unclear how long Germany’s commitment to sanctions will survive as the economic bite drags on.

But Meister, the foreign relations expert, believes even recession is unlikely to reverse the shift in German policy.

“I think that everybody now understands that Russia changed the European order,” Meister said, “and we need to show them that it is unacceptable.”