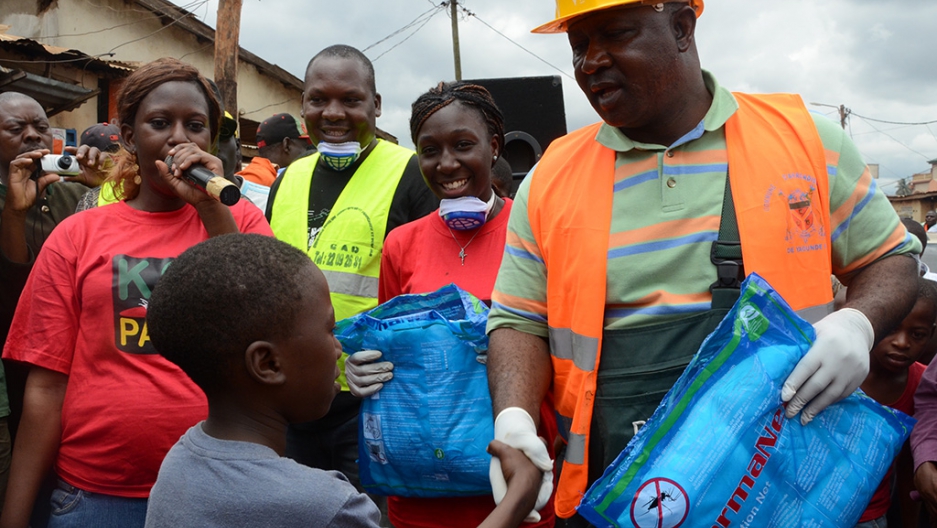 YAOUNDE, Cameroon — How do you celebrate World Mosquito Day?

If you’re the NGO Malaria No More, you send “junior ambassadors” to Cameroon’s capital city to lead a loud and raucous street rally.

Onlookers crowd around a local official as he digs out sewage trenches so that water will flow and mosquitoes can’t breed. They listen to a song about malaria, to speeches, and to children being quizzed. Kids who get the answers right get mosquito nets.

The loudspeakers are turned up high, and despite the hot weather, men and boys, and women and girls in brightly colored dresses jostle to get close to the speakers, dancers and drummers.

I’m in Cameroon to look at anti-malaria projects funded by ExxonMobil, including several outreach programs run by the NGO Malaria No More. Malaria kills 2,000 people per year in this country of 23 million people. Half of those who die here from malaria are children under five. Virtually all of these deaths could be prevented by mosquito control and early treatment – so much so that where the global health buzzword used to be “malaria control,” some people are now talking “eradication.”

But those trying to eradicate malaria are facing a formidable foe: mosquitoes. They are the world’s deadliest beings. Depending on whose numbers you want to believe, malaria-carrying mosquitoes kill 600,000 to over a million people a year. And then there’s yellow fever. Dengue. Chikungunya. Encephalitis.

Years ago I took a course on malaria taught by mosquito expert Andrew Spielman at the Harvard School of Public Health. An enthusiastic man who enjoyed life’s ironies, he waxed rhapsodic about the mosquito’s capabilities. While fully appreciative of the illnesses and deaths they cause, he considered them “magnificent enemies,” beautiful and efficient. He wanted people to admire them.

In his book Mosquito: A Natural History of Our Most Persistent and Deadly Foe, Spielman imagines you, the reader, hearing the buzzing of a female mosquito (males don’t bite), and sensing it preparing to suck your blood.

“At such a moment,” he writes, “you can be forgiven for failing to notice what an elegant and hardy thing she is. But she is.”

World Mosquito Day — August 20 — is celebrated in interesting ways each year. This year there was a party in the library at the London School of Hygiene and Tropical Medicine that called for “tropical” attire.

British scientist Ronald Ross was the first to celebrate this day, commemorating his own discovery on August 20, 1897 that mosquitoes carry malaria. Until then, malaria had been blamed on “bad air” – in fact, that’s the derivation of the word “malaria.” But Ross discovered malaria parasites within the guts of mosquitoes. He was known as strong-willed, eccentric and egocentric (he named Mosquito Day in honor of his own discovery, after all), and he was also a poet.

He wrote of his discovery:

I know this little thing
A myriad men will save.
O Death, where is thy sting?
Thy victory, O Grave?

But 117 years later, death still has its sting. People are still dying because of mosquitoes. One prescription is for more attention to the little bug. In a recent blog entry, Bill Gates wondered why there is no TV channel featuring “Mosquito Week”.

Globally, there are lots of fronts in the war on malaria, including distributing insecticide-treated bed nets, getting rid of standing water where mosquitos breed, providing adequate access to health care and educating people that malaria deaths are not inevitable.

In Cameroon I’ve been struck by the complacency in rural areas – and even in the city – about malaria. Malaria is a tragedy, but it’s always been here, the thinking goes, and always will be.

Maybe giving mosquitoes as much publicity as the diseases they cause will help. World Malaria Day, April 25, “is like our Christmas,” says Olivia Ngou of Malaria No More. “We get a lot of attention.” The group organizes public education events. The media show up. “World Mosquito Day is not as popular,” she says.

But she’s working on it. This year, posters, word-of-mouth and the noise of the rally itself have drawn lots of attention, and success – cameramen from all the local TV stations show up.

Basted in DEET and marinated in an antimalarial drug, I listen to the rally. But already, I’m staring at two recently-acquired mosquito bites.