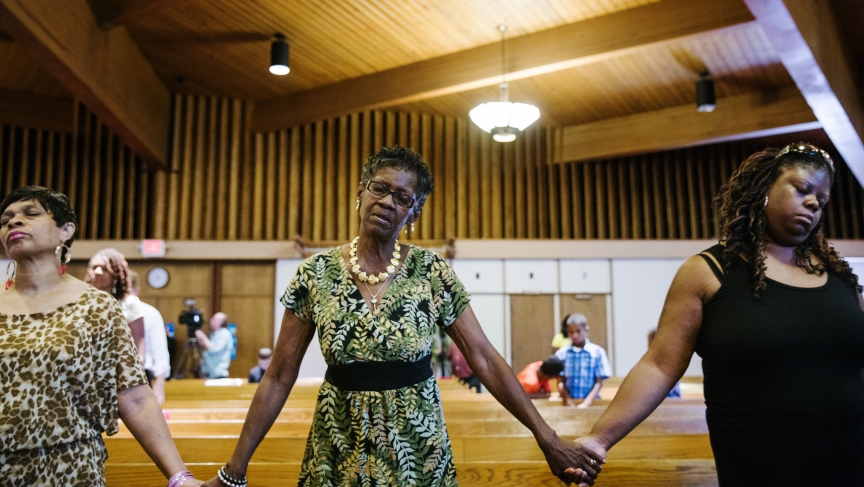 Parishioners hold hands during church services at the Greater St. Mark Family Church as the community discusses reactions to the shooting of teenager Michael Brown in Ferguson, Missouri, on August 17, 2014.
Credit:

Much of the national discussion prompted by the killing of 18-year-old Michael Brown has centered around how the police — and Americans as a whole — treat black citizens. But what about African immigrants to the United States? Do they see themselves as part of that same discussion?

Hannah Giorgis thinks they should. The writer, who comes from an Ethiopian and Eritrean background, argues that African immigrants like her should be "in solidarity with other black people in the United States — whether that's people who identify with African American, or other African immigrants such as ourselves, and people who are immigrants from other places in the Afrian diaspora.

In a recent column in the Guardian and in an interview with The World, she urged immigrants to be "Ferguson strong." That, she says, is "the idea of understanding that that there's something really important happening right now [in Ferguson] that does concern us."

Giorgis wrote that "too many black immigrants believe ourselves removed from the threat of police violence, saved somehow by the allure of our accents or the false safety of our refusal to openly question American racism."

When immigrants come to the US for the first time, she argues, there's often a race to achieve the American dream, "You're sold a lot of images about prosperity and about becoming the right kind of American — and the right kind of American isn't black. ... So I've seen people shift away from wanting to identify with African-American people as both a survival tactic and as a way to assimilate into the 'perfect' American identity."

Giorgis' father, for example, immigrated from Ethiopia in the early 1980s to escape political turmoil. He's "more apt to believe the narrative around Michael Brown having stolen something, or maybe he was a threat and maybe the police officer genuinely feared for his life," Giorgios says.  "And I think that some of that stems from a really earnest desire to believe that this country to which they've immigrated is as honest as it makes itself out to be."

But for second-generation Americans, like Giorgios, that's not necessarily the case: "For me, having grown up here, I see a different side of that."

She's more aware of the long history of problems that black Americans have faced with law enforcement. In her Guardian piece, she wrote that "Guinean immigrant Amadou Diallo was not asked about his native language before officers emptied 41 bullets into his body. When Haitian immigrant Abner Louima was brutalized by NYPD officers, none of them paused to inquire if he was the 'right' kind of black to be torturing. Our international flavor of respectability politics will not save us from the sin of our skin."

Giorgis says she believes the legacy of Ferguson will be about "collective resistance, of talking back to the state and of recognising that black bodies are worthy of life and that we matter and that regardless of what the state and media say  that we have a right to assert that and a right to mourn and feel and grieve in the way that all other humans can."

In the end, she says, she also hopes more African immigrants will take up the collective interests of the black community in America. "We are here, working jobs and living our lives, only because of the profound sacrifices that black folks in this country have been making since its inhumane inception," she argued in her article. "We cannot pretend to only have inherited its riches; we cannot turn our backs on the kinfolk who made our existence here possible just because we falsely believe their concerns to not include us. We bear the beauty of blackness — now we must bear its responsibilities."