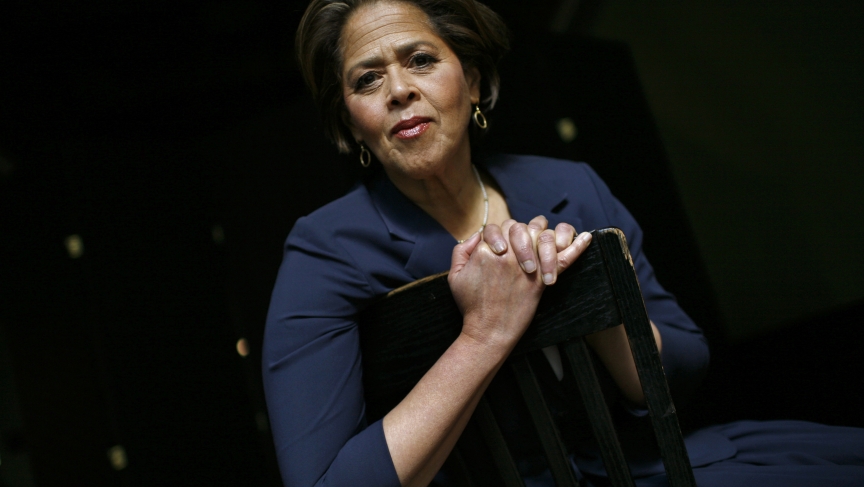 The events following the police shooting of 18-year-old Michael Brown in Ferguson, Missouri reflect a familiar narrative — a story that revolves around race, law enforcement and protest in America.

The Ferguson news coverage echoes a number of developments in recent history: The Trayvon Martin case in 2012, the Jena Six case in 2007, and the Los Angeles riots after the Rodney King decision in 1992.

Playwright and actress Anna Deavere Smith arrived in Los Angeles a few weeks after the Rodney King riots — after the media left. Through in-depth interviews with hundreds of residents and witnesses, she developed her award-winning play, "Twilight: Los Angeles, 1992." Her research has brought up the challenges police face in these situations, from Los Angeles in 1992 to Ferguson in 2014, along with what society expects of them.

"The cops are on the front line, and when these explosions happen, they become the main characters," Deavere Smith says. "But we all are involved in this. That is not to excuse what happened, but they are the ones on the front line. They are acting out the drama — the cop and the kid — for all of us while we sit back and watch."

Deveare Smith says the situation in St. Louis has made her reflect on the way Daryl Gates, the Chief of Police in Los Angeles during the Rodney King riots, approached things in 1992. Deveare Smith points out that Gates was severely criticized for not intervening and controlling the violence.

"What happened in L.A. is that ‘they’ burned down their own neighborhood," she says. "That's a terrible notion, but it did give me pause [and made me think] wow, maybe Daryl Gates had more of a strategy than people gave him credit for."

As an artist, Deveare Smith thinks about the roles people are playing in Ferguson. Deveare Smith is particularly interested in the "character" that Missouri Highway Patrol Capt. Ron Johnson has been playing.

"It’s interesting casting, at the very least," she says. "He's more heartfelt than anybody else. By that I mean the governor and other officials are reading from a text — they're very careful in their cadences. So I think it's interesting that one person has to be more emotional."

But Deveare Smith is not surprised by the way the story is unfolding, or how the media is reporting the events in Ferguson.

"Listen, none of us are surprised when we read a Pew Research Report [saying] that blacks and whites differ when it comes to what's going on in Ferguson," she says. "So I don't think I can say I'm surprised. I'm very interested in the differences in opinion and I’m very interested in that sort of Rashomon about what’s right and what’s wrong in America, and about the variety of values here."

A look through America’s recent history shows that a variety of viewpoints have been with us over the years, taking stage in towns across the nation.

"I mean, here we are 60 years since Brown vs. The Board of Education and ... most people would assess that we're more segregated than ever,” she says.

Deveare Smith recalls that last summer, not very far from Ferguson, there was backlash among white parents when mostly black students were given the opportunity to go to a better, mostly white, school district.

"Some parents came forward and said, ‘You know, we don’t want drugs and violence in our schools,'" she says. "Laws can do so much, but a certain point we as a nation have to determine that we have the ability to care about more than the people who live inside of our house."

For Deveare Smith, ending crime, violence and addiction begins with one task.

"It starts with poverty — if we really wanted to stop it before it starts, we'd stop poverty," she says. "We’d try to bring more equity in our society."