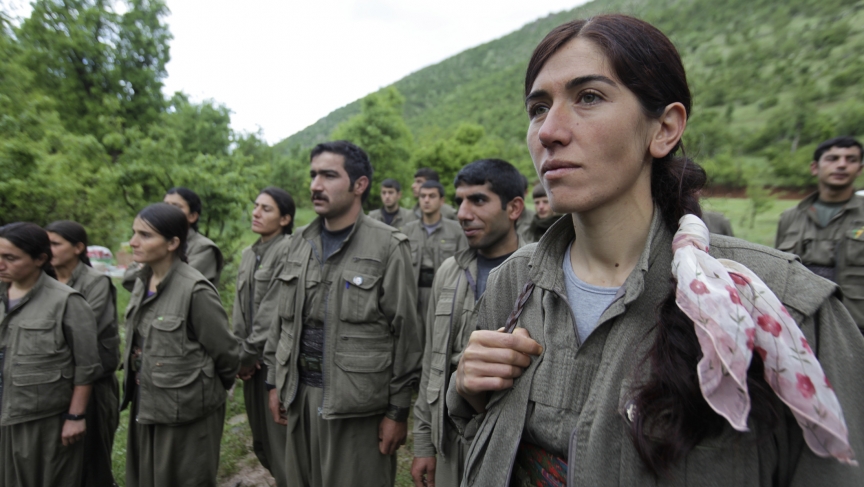 Fighters from the Kurdistan Workers Party, or PKK, stand in formation in northern Iraq on May 14, 2013.
Credit:

The fight against ISIS in northern Iraq has centered on the peshmerga, the Kurdish militia that is now receiving direct support from the United States. But the Kurdistan Workers' Party, also known as the PKK, is playing a growing role that can't be ignored thanks to the group's infamous history.

The US government officially considers the PKK a terrorist group thanks to its long and bloody insurgency against Turkey, a NATO ally. The PKK has appealed for an independent Kurdish state within Turkey since at least 1984. It's been a thorn in the side of fellow Kurds in Iraq.

"This is really amazing because for the longest time, the PKK — the Turkish Kurdish force — has not only been fighting Turkey, but it's also been in an intermittent conflict with the Iraqi Kurds," says Aliza Marcus, the author of a book on the PKK called “Blood and Belief: The PKK and the Kurdish Fight for Independence."

She acknowledges that "when Kurdistan itself is threatened — and there's no question that the fight by these Islamic fighters threatens Kurdistan itself — Kurds come together to defend what they see as their land."

But if the peshmerga and the PKK are working together, is it possible for the US to aid one group without helping alleged terrorists and angering a key ally?

The question is important because American support is critical to fighting ISIS. The Kurds don't have their own air force, and neither the PKK nor the Iraqi Kurds are equipped to fight against the sophisticated American military equipment that ISIS captured after it was abandoned by the Iraqi Army. That's why the US is now providing weapons and air support to Kurdish troops.

If the US wants to turn that support into victory, Marcus says, it may simply have to change its tune on the PKK.

"I think the US isn't really thinking logically about the situation," she argues. "I'm not saying that the US needs to take the PKK off the foreign terrorist list tomorrow. But they need to think on the ground: What is the PKK doing? What is it providing? And the fact that it's allied with the Iraqi Kurds is a really strong signal that the PKK can't be ignored."

There's also seemingly less danger that softening the stance on the PKK would anger Turkey: The group seems to have reached a tentative cease-fire with Ankara over the past 18 months.

"Turkey keeps saying that it's planning some sort of broader peace negotiation," Marcus says. "I think that's an important signal — not just for the Iraqi Kurds, who have almost grudgingly welcomed the PKK, but for the United States, who is looking at the situation on the ground and trying to figure out how to be most successful in the fight against these Islamic forces."

Turkey has also dealt with the PYD, the Syrian Kurdish party that the US says is tied to the PKK. The American government hasn't dealt with the PYD because of the links to the PKK, but Marcus argues "it's very hard to understand that logic when the PYD has been fighting ISIS, and has been able to hold territory against them."

Marcus says members of the global Kurdish community are both excited and fearful of the new alliance between the PKK and Iraqi Kurds.

"For the first time really, Kurdish forces are coming together, they're taking a national stand and they're working together to protect their land," she says. "At the same time, they're very worried that if ISIS is successful, Kurds will be massacred like what we've been seeing with the Yazidis. They're simply worried that the PKK will be abandoned at some point."

But while those forces are joining together, Marcus thinks the international community shouldn't hold out hope for a unified Kurdistan in the long run.

"I don't think the Kurds see themselves as wanting to or being able to govern together," she says, "but they certainly see that they want to support each other's attempts to setup self-rule, and to be able to live in this area peacefully."