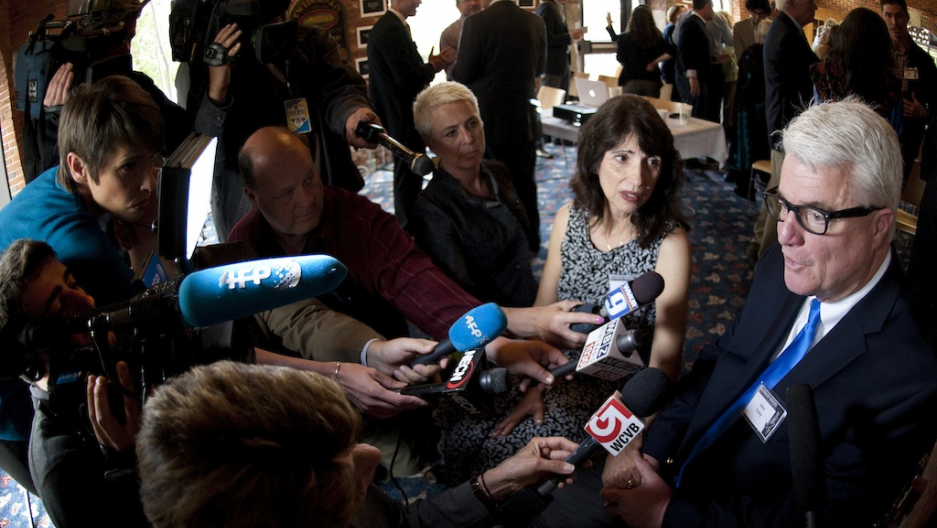 John and Diane Foley, parents of James Foley, listen to a panel discussion about the importance and dangers of reporting on world conflicts at a Free James Foley event on May 3, 2013 in Boston.
Credit: Don Emmert
Share

BOSTON, Mass. — There is a band of light that pierces through the depths of darkness surrounding the execution of James Foley, and that is the light of faith that the Foley family keeps returning to to get through this time.

Foley’s parents, John and Diane, are devout Roman Catholics and very open about how their faith has provided strength for them as they have endured the unfathomable way in which their son’s life was taken by Islamic State militants.

The message of that faith made it to Rome and prompted Pope Francis to call the Foleys on Thursday at their home in Rochester, New Hampshire, where Jim came of age with his four siblings.

In one of several conversations during the last few days, John Foley said the family's faith is still strong and allows them to open their hearts and, as he put it, “stay away from bitterness.”

The intensity of the family’s faith was part of who Jim was. He was a passionate reporter on the front lines who drank a lot of coffee, smoked a lot of cigarettes and loved to have a pint. But when you really got to know him, a quiet, motivating faith came across.

That faith was also clear when he recalled the day his captors in Libya — where he was kidnapped in 2011 while on assignment for GlobalPost — suddenly allowed him to call his mother after more than two weeks in jail.

“Not only did they let me call her, but she picked up the phone,” Jim told students at Northwestern University’s Medill School of Journalism, his alma mater, in June 2011. He’d recently been released by Muammar Gaddafi’s regime following 44 days in captivity in Tripoli.

“I only know one number, my family's phone number,” Jim said with a wide smile and a quick laugh. A global campaign to “Free Foley” had emerged while the reporter had been sitting in a cell. “My mom actually picked it up. That was a miracle, you know, that was God right there."

He continued, “I had no idea what's going on. I had no idea what people were doing for me. No idea. You're in a cell, it's like a submarine, you can only see out these bars and you're just trying to stay sane, through prayer and cigarettes basically."

Jim’s beheading by the Islamic State was broadcast around the world Tuesday in a video published online after almost two years after his kidnapping in northwest Syria while covering the rebel uprising against Bashar al-Assad. His conditions during that time are still somewhat unclear, but now-released fellow prisoners have said Jim was singled out for brutality because he was an American with a brother in the US Air Force. His grotesque and very public murder at the age of 40 has put his sense of religious purpose and his family’s Catholic faith before a global audience, some of whom have been indelibly affected by the graphic images.

At Our Lady of the Holy Rosary parish in Rochester, New Hampshire, the Foleys’ home church, congregants had been praying since Thanksgiving Day 2012 that their generous son would again be delivered home to them, as he had been from Libya. Instead, 100 of them remembered Jim at a mass on Wednesday, the Los Angeles Times reported, as Rev. Paul Gausse offered a prayer for the perpetrators of Jim’s killing.

“We are not just praying for us and the Foley family, but praying for those who have perpetrated this kind of evil,” he said. “These people need prayer. ... This is being done in the name of God. How insane can that be? That kind of insanity is demonic, my brothers and sisters.”

Those close to Jim knew the mix of empathy, curiosity and intrigue that compelled him to report on conflict in Libya, Iraq, Afghanistan and ultimately, Syria, where he is believed to have died. They also knew Jim was a rare mix of relentless and affable, which is why so many fellow journalists enjoyed working with him.

“The answer was, why do firemen go back into blazing homes?” John Foley said at a press conference in Rochester on Wednesday, after US intelligence services delivered the grim news that the video of Jim’s execution appeared to be authentic. “It was his job … this was his passion. He was not crazy. He was motivated.”

“He felt compelled to be a witness to people in conflict. This, he felt, was his mission,” Diane Foley added. “He died for that compassion and that love, and I pray that he can be remembered that way and that he not have died in vain.”

She continued, “We thank God for the gift of Jim. We are so, so proud of him."

Jim taught low-income middle school students in Phoenix after graduating from the Jesuit-founded Marquette University in 1996, staying in close touch with many of them for the rest of his life. He devoted himself to journalism in 2007 when he entered a graduate program at Northwestern’s Medill School, where he pursed his dream to become a foreign correspondent.

Upon his return from captivity in Libya, he wrote an essay for Marquette Magazine about the experience. In it, he recalled sharing a cell with friend and fellow captive Clare Gillis during the first days of their incarceration:

Each day brought increasing worry that our moms would begin to panic. My colleague, Clare, was supposed to call her mom on her birthday, which was the day after we were captured. I had still not fully admitted to myself that my mom knew what had happened. But I kept telling Clare my mom had a strong faith.

I prayed she’d know I was OK. I prayed I could communicate through some cosmic reach of the universe to her ... Clare and I prayed together out loud. It felt energizing to speak our weaknesses and hopes together, as if in a conversation with God, rather than silently and alone.

He concluded, “If nothing else, prayer was the glue that enabled my freedom, an inner freedom first and later the miracle of being released during a war in which the regime had no real incentive to free us. It didn’t make sense, but faith did."

And faith continues to make sense to the Foleys, though Jim is gone.

At the Wednesday mass, Rev. Gausse told parishioners about his visit with John and Diane at their home the night before, when the terrible news first broke. As he was turning to leave, he said that Diane looked at him: “She said, ‘Father, pray for me that I don’t become bitter. I don’t want to hate.’ That’s a woman of deep faith.”