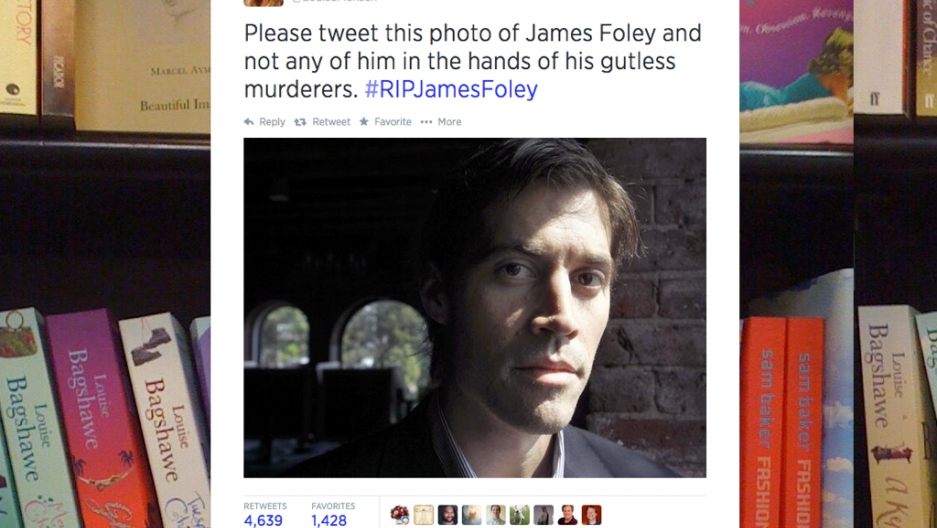 The Islamic State used social media to tell the world that it had executed American journalist James Foley, a GlobalPost correspondent who had been missing since November 2012, when he was kidnapped while reporting in Syria. The announcement came in the form of a video — one that was slickly produced and carefully edited — posted to YouTube. Almost immediately, the news spread across Twitter and other social networks.

Since then, people have turned to social media to express their love for Foley and their and outrage at his senseless killing. Twitter and Facebook have been flooded with support for Foley's family and praise for his work. They've also been filled with condemnation of his barbaric beheading. And, perhaps not surprisingly, they've attracted debate over what should or shouldn't be shared and shown on those same networks.

The vast majority of social media reaction has been support for Foley's family, and appreciation and honor for Foley and his years of reporting. Friends, family, colleagues, and countless strangers filled Twitter with gratitude and genuine love.

It poured in from Syria, where Foley went missing while he reported — fearlessly and with a commitment to truth and justice — on the popular uprising against Bashar al-Assad.

It came from some of the most respected organizations in journalism.

It came from his colleagues.

It was an honor working with you, #JamesFoley. The @GlobalPost family will miss you deeply. @findjamesfoley pic.twitter.com/MZZY62CMU3

And, of course, it came from his family. Foley’s mother, Diane, posted a beautiful and devastating statement to Facebook.

Most of the world was sickened by the news of Foley's execution and by the images circulated by the Islamic State. World leaders, celebrities, journalists and ordinary people around the world took to Twitter and Facebook to vent their outrage.

Barack Obama gave a public statement, but for those who might have missed it, his administrion also posted his angry words to Twitter.

"Today, the entire world is appalled by the brutal murder of Jim Foley by the terrorist group, ISIL." —President Obama

If true, the murder of James Foley is shocking and depraved. I will today chair meetings on the situation in Iraq/Syria.

US Secretary of State John Kerry offered a terse and forceful condemnation.

ISIL must be destroyed/will be crushed.

The gruesome video, which US intelligence agencies confirmed is authentic, sparked a more complicated reaction than just support and outrage.

Social media users and some journalists found themselves seriously conflicted over whether to share the video and stills taken from it. Those debates organized themselves — in classic Twitter fashion — around a set of hashtags:

Some people felt that sharing images from the Islamic State video were disrespectful to Foley. They said Foley shouldn't be remembered as an abused captive awaiting his death, but rather, as a friend, son, and journalist. They urged others to share photos of Foley taken before he was kidnapped, as well as examples of his work, and not the images posted by his killers.

Please tweet this photo of James Foley and not any of him in the hands of his gutless murderers. #RIPJamesFoley pic.twitter.com/cAcVVJgyDn

Many people have refused to distribute or watch images from the video for another reason — because that's exactly what Islamic State wants us to do.

Islamic State has long been active on social media networks, uploading shocking images and videos of mass executions, random killings, amputations and beheadings carried out by its militants across Syria and Iraq. Sharing those images and videos means helping the group expand the reach of its propaganda.

Foley’s sister, Kelly, also called on social media users not to share the video of her brother's final, terrifying moments.

American actress Mia Farrow was among the thousands of prominent Twitter users asking people to ignore the shocking footage.

Blackout on group that murdered James Foley. Don't share video. Give them nothing. #RespectJamesFoley

Those who chose to ignore the call were censured in several ways.

YouTube removed the video minutes after it was uploaded to the websites on Tuesday. It's been removing copies every since.

We have been and are actively suspending accounts as we discover them related to this graphic imagery. Thank you https://t.co/jaYQBKVbBF

In the United Kingdom, punishment might be even more severe for people who choose to watch or distribute the video. British police have warned social media users in the UK that sharing the video might violate an anti-terrorism law and land them in prison.

Correction: An earlier version of this article mistakenly said James Foley went missing in April 2012. Foley was kidnapped on Nov. 22 of that year.