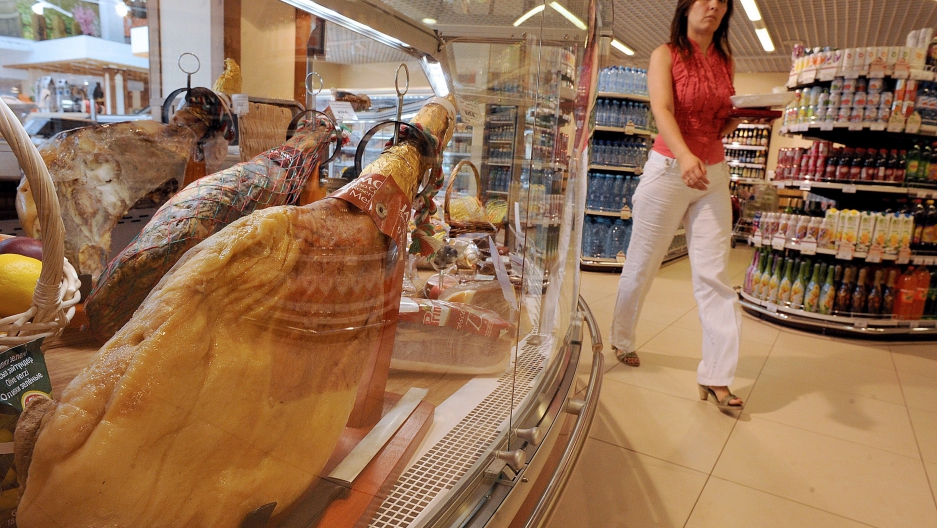 Get it while you still can: a supermarket in St. Petersburg.
Credit: Olga Maltseva
Share

President Vladimir Putin’s decree earlier this month banning agricultural, meat and dairy products for one year from countries that sanctioned Russia over its support for separatist rebels in eastern Ukraine prompted at least some Russians to worry about price hikes, food deficits and an impending sense of international isolation.

But the resounding message from on high has rung loud and clear: It’ll be okay.

Prime Minister Dmitry Medvedev was among those who have moved to repeatedly assuage potential fears, claiming the ban won’t infringe on the domestic food market or hurt average consumers.

“I would like to reiterate that, naturally, Russia had to take these reciprocal measures,” he said at a meeting with his deputies on Monday, the state news agency RIA Novosti reported.

“I hope they will not last long.”

Other top officials and public leaders have fallen in line. Anatoly Chubais, a onetime leading liberal reformer and now head of the state-owned nanotechnology company Rusnano, boasted on Tuesday he could “very well survive on buckwheat porridge,” the RBK Daily newspaper reported.

Such sentiments have been accompanied by various efforts aimed at minimizing the negative impact of the embargo, which many observers paint as a heavy-handed retaliatory gesture that further isolates Russia from the global community.

Officials in Russia’s far eastern Chukotka region said they would breed local reindeer to replace that region's usual imports of American meat, according to The Moscow Times.

Medvedev on Wednesday also signed a decree that excludes from the banned items list salmon and trout hatchlings, as well as sweet corn and peas for planting, a move observers said is aimed at reducing pressure on local farmers. The measure also excludes lactose-free dairy products and a number of supplements.

Officials in the world's fifth-largest recipient of agricultural imports have also taken measures to dampen potential discontent with the ban. The Federal Antimonopoly Service has even launched an internet hotline through which consumers can file complaints over what they believe might be unjustified price hikes.

Officials in various Russian cities have already reported rising food costs, from 6 percent for processed meat in Moscow to a whopping 60 percent increase for chicken on the far eastern Sakhalin Island, the Kommersant daily newspaper reported.

Critics at home and abroad have railed against the Kremlin’s knee-jerk response to sweeping Western sanctions, which have targeted Russian banks as well as the country’s defense and energy industries.

Reactions on social networks — the virtual meeting place for much of Russia’s liberal intelligentsia — have so far been colored mostly with dark humor. One popular joke that’s made rounds online holds that “Russia imposed sanctions on itself.”

But many others have argued the move is part of a broader trend of elite manipulation that harks back to the moral decay of the Soviet Union.

“Top officials lived in palazzos while the rank and file had to wait for years to get access to cramped spaces in prefabricated apartment blocs.”

Still, there are also plenty of signs the Kremlin embargo will indeed hit its intended target, at least in part.

Other European farmers and businesses, some of which also send a fair chunk of their produce to Russia, fear the negative effects of oversupply on their domestic markets. The European Union has announced it would spend more than $160 million to help them weather the apparently crippling ban.

Meanwhile, Russian officials appear at least outwardly calm about the future prospects for their country's own food market, even trumpeting the ban as a way to stimulate domestic food production.

Alexei Nemeryuk, head of the Department of Trade and Services for the city of Moscow, says food prices in the capital will probably continue to rise through the end of the year.

But he dismissed suggestions that ordinary Russians will suffer from a deficit of food on the domestic market, claiming that “more than 100 companies in Latin America are prepared to supply us with meat and fish,” local news agencies reported him as saying.

Other officials have appealed to Russians’ most cherished culinary traditions in a bid to soothe potential concerns.

Ilya Shestakov, head of the Federal Fishery Agency, said herring and red caviar — longtime favorites for feasts and other special occasions — would not disappear from the table during New Year's, the most popular holiday in Russia.

“Of course, the assortment on store shelves will change a bit, but there’s no need to be afraid,” he told reporters on Tuesday. “On the contrary, it should be welcomed.”