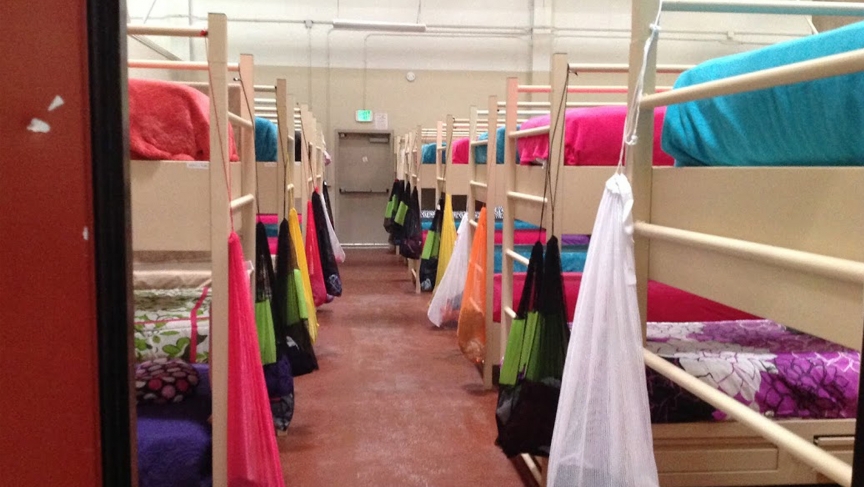 Sleeping quarters at the Naval Base Ventura County Temporary Shelter in Port Hueneme, California. The Department of Homeland Security and Health and Human Services set up various temporary shelters around the country to accommodate the surge of unaccompanied minors. Now the government has dispersed these unaccompanied minors from military bases to state-licensed shelters, including The Children's Village in New York.
Credit:

Meet "Carlos." He's 11 years old, and we're not using his real name for reasons that will soon become obvious.

For more than seven years, he and his young teenage sister lived with close relatives in rural Guatemala, while their mom supported them from Atlanta as a housecleaner. For years, she saved up for the smuggler’s fee, knowing that one day she would bring her two kids to the US.

But then the need to do that became urgent — when robbers murdered the two relatives who cared for Carlos and his sister.  When the armed men began shooting inside his living room, Carlos thought “there were fireworks in my neighborhood.”

After that, in November, Carlos’s mom paid more than $11,000 for a coyote, or a human smuggler, to bring her two kids to Atlanta. They reached the South Texas border, and crossed the Rio Grande. But then the smuggler ditched the kids on the other side, and Border Patrol caught them both.

Immigration officials in Texas called Carlos’s mom and said her kids would be flown to a shelter in New York until they could be reunited with her.

“I was happy because I thought we were going to see our mom,” Carlos says.

But not quite yet.

The brother and sister were taken to a residential detention facility called The Children’s Village, about 30 minutes outside New York City.

The rise of young Central Americans crossing the US border over the past year overwhelmed detention facilities in Texas. In response, kids like Carlos and his sister were shuttled to a nationwide network of 90-plus state-licensed detention facilities. They can stay for weeks, or months, in some cases, as paperwork is processed.

Carlos's mom says it took several weeks for the government to process her fingerprints so that she could be verified as the siblings' parent.

At The Children's Village, Carlos's sister was placed in an all-girls area.
Carlos stayed in an area with older boys, 17-year-olds, he says. It is unclear who they were: Central Americans caught at the border or youth with behavioral problems.

What is clear is that, one evening in December — not long after Carlos had arrived at the shelter — one of the older boys sexually assaulted him. Carlos says he eventually fought him off and cried out. Shelter workers came into the room and took him to a hospital.

The next morning, Carlos’s mom says shelter officials called her. They told here there “had been an incident with a boy” at the shelter, and that Carlos would fly to Atlanta the next day. “They said he’d been taken to the hospital but that he was fine, and that I shouldn’t worry,” she says.

She demanded more information and was told that Carlos would arrive in Atlanta with records detailing what happened. But when he got off the plane, she says he didn’t have any paperwork with him.

“I called the shelter right then and asked them what had happened,” she says. “They told me that there had been a mistake and that they needed to hold on to the records for a while.”

Meanwhile, her son said he was in pain. “I was in the dark and scared for him,” she says. She rushed him to a hospital in Atlanta to be examined.

That doctor’s report states that Carlos was sexually assaulted.

Since then, Carlos’s mom says she has entered a black hole trying to find out exactly what happened to her son. She says officials told her there was a police report. But, so far, she has only received one piece of paperwork — a bill for $800. It is from New York’s St. John’s Riverside Hospital, where her son was examined the night of the assault.

Immigration advocates say shelters are generally safe, but stories like these raise serious concerns. Michelle Brané is with the Women’s Refugee Commission in Washington, DC. “There’s been very little oversight and monitoring of these facilities. And these children have really no access to the outside world,” she says.

The Children’s Village directed my calls to the Department of Health and Human Services, which oversees the state-licensed shelters — including those that have absorbed the increasing flow of children from Central American who have crossed the US border illegally over the past year. An HHS spokesman would not comment on any policy regarding the placement of children of different ages in the same room. He also wouldn’t comment on what information parents should receive when their children allege abuse.

Yet, in an emailed statement, he states “HHS and the Department of Justice are working on a Memorandum of Understanding to make clear the applicable reporting requirements.”

Brané says the vague reporting requirements make it hard to know how many abuses like this happen. “I’m certain there are many cases that we never hear about,” she says. “There has to be a way to make certain that these cases are not hidden away.”

Carlos’s mom says people like her, without the papers to live and work legally in the United States, can be afraid to speak up.

“We stay quiet about so many things,” she says, sitting in her living home in Atlanta, with Carlos and his sister by her side.

But when her husband, who is undocumented and from Latin America too, saw her paralyzed with sadness over what happened to Carlos, he convinced her to call an attorney.

She now has two lawyers in Atlanta working with the family pro-bono — one to investigate the crime at the shelter. The other is Dustin Baxter, an immigration lawyer. He is having a hard time getting information from the shelter. “They have not been helpful at all,” he says, “which just makes us all the more suspicious that something is going on to cover this up so that it doesn’t see the light of day.”

Baxter is working to get Carlos a U-visa, which is granted to immigrants who are victims of rape and other crimes. It could give Carlos — and his family — legal status in the US, since they are his caretakers.

Now, the family waits. “Everything is in the hands of God,” Carlos’ mom says.

When I visit the family in Atlanta, Carlos is outside with his mom trying to corral two puppies back into the house.

He's also seeing a psychologist. So is his mom. She feels incredible guilt about what’s happened, and hopes that now — with the family all together here — they can start over.