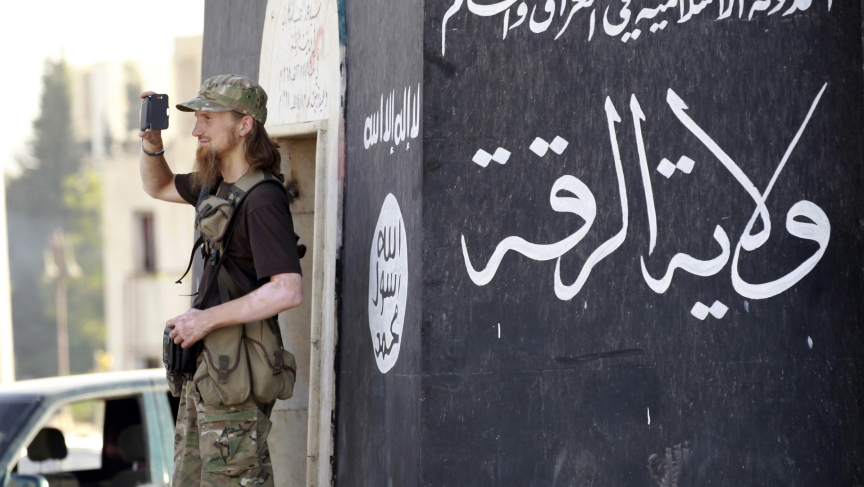 A militant Islamist fighter uses a mobile phone to film his fellow fighters taking part in a military parade along the streets of Syria's northern Raqqa province on June 30, 2014.
Credit:

Western recruits with extremist groups like ISIS, which claimed responsibility for the execution of James Foley, are spreading their radical vision with serious online savvy.

“Some of the Westerners who've turned up in Syria and now in Iraq are people who have experience with web editing, with video production," says Peter Neumann of Kings' College London. "For them, the use of social media production — whether it is Twitter, Instagram, Facebook — is something that they've grown up with. It is completely normal to them."

Neumann is one of the authors of "Greenbirds," a study on the social media strategy of militant groups like ISIS, which calls itself the Islamic state, and its rival in Syria, Jabhat al-Nusra. He says there about 2,500 of these Western recruits fighting with jihadis in Iraq and Syria.

His study drew from a database, compiled over the course of 12 months, of the social media profiles of 190 Western and European foreign fighters. The name "Greenbirds" is taken from language in scripture used by supporters of extremist groups when eulogizing fallen comrades.

Among its key findings, the study's authors write that, “in the minds of the foreign fighters, social media is no longer virtual: it has become an essential facet of what happens on the ground.”

“They are using social media for all kinds of things,” Neumann says. They post pictures and videos, conduct online debates and reach out to potential new recruits. “That is perhaps the most problematic aspect of their social media use, because they are speaking to wannabe foreign fighters who are still in Western countries.”

He says that "a lot of the messaging is aimed at persuading young Westerners to come to Syria and to Iraq to help build the Islamic state.” The online extremists are in part “there to answer questions, they are there to explain the logistics," something like a combination concierge and therapy service for would-be terrorists.

“They are saying, 'You can be part of something fantastic,” Neumann adds. “'Something that people in a thousand years will be talking about, because we are creating the new caliphate! Come and be part of it!'”

Various Western governments, including the US, have launched online counteroffensives of their own. In March, the State Department unveiled a Twitter account that bantered with jihadis and their supporters. But such efforts seem to generate more mockery than success stories. “These campaigns often are not as sophisticated as the jihadists,” Neumann says.

Success in an environment like Twitter, Neumann says, depends on moving quickly and taking risks. Governments, however, are risk averse: “[They] are not quite ready to embrace social media for what it is.”