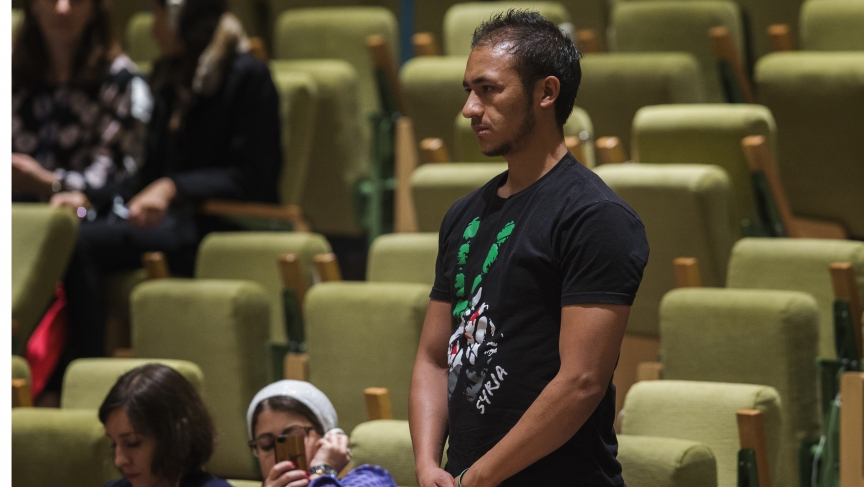 The gruesome killing of American journalist James Foley by ISIS militants has sparked outrage all over the globe and in the US. The Syrians who Foley covered are also appalled.

Qusai Zakarya, a former university student from the Damascus suburb of Moadamiya, has been through his own ordeal over the past couple of years. He endured more than a year of siege by the Assad regime and was gassed and left for dead during the chemical attacks one year ago today.

But the news about James Foley still shocked Zakarya, who says he can’t quite describe the feelings of losing someone who he considers a hero for coming to Syria to publish the truth. “In Syria, as an activist, it’s a crime to just publish the truth,” he says.

Zakarya became an activist after the chemical attacks, eventually escaping to Beirut and then to the US. Now he's trying to drum up support for intervention in Syria. He hasn't been successful yet, even as the US decided to intervene with the same kind of airstrikes against ISIS in Iraq that he's long hoped for in Syria.

While he says he was happy that the besieged Yazidis would get help, he admits to feeling rage when the strikes were announced. “President Obama talked about potential genocide and that’s why he acted,” he says. “In Syria, we had a true genocide going on.” The Syrian Observatory for Human Rights, a London-based pro-opposition group that monitors the war, says that more than 180,000 people have now died in Syria.

So while intervention in Iraq left him saddened and disappointed, Zakarya is still busy lobbying people in Washington to help his own country. He believes that many people are listening, but that President Obama is blocking their efforts. “Unfortunately, President Obama doesn’t have the decency to admit that his policy towards Syria was a big failure,” he says.

Zakarya warns that the more dictators feel there are no consequences for their crimes, the more dictators — and militant groups like ISIS — will spread. That’s why he feels it’s important to tell the stories of what is exactly going on in such countries.

And that gets him right back to the loss of James Foley. Foley, he says, is a true martyr and true model for the Syrian people. “Believe me," Zakarya says, "when you’re living in a dark place like Syria, just saying the truth is something more valuable than you can imagine.”

Like most Americans, the members of The World's newsroom are still in shock over the execution of James Foley. We spoke to him on air as he covered some of the most dangerous and vital stories of the last few years, from Libya to Syria. You can still listen to some of the many times we interviewed him on PRI.org.