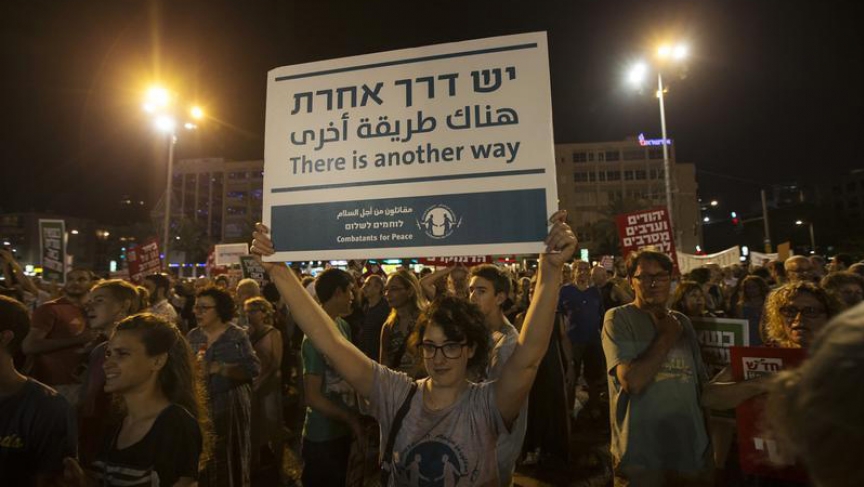 A woman holds up a placard during a peace rally in Tel Aviv's Rabin Square.
Credit:

But the war has been fueling another conflict in Israel — one between those who support the Israeli military operation and those who oppose it. The tensions can be seen in Facebook news streams and heard at dinner tables and around workplace water coolers. Meet one young Israeli couple near Jerusalem who has dealt with this divide first-hand.

Guy, who didn't want to be identified with his last name because of the discrimination he's already faced, is a teacher at a bilingual Jewish-Arabic school in Jerusalem. He is in favor of peaceful diplomacy and negotiations, but faced backlash from family and friends after voicing these opinions online.

His girlfriend, Liron, a pseudonym she provided, as she fears her career might be further jeopardized if she uses her real name, is a kindergarten teacher.  She was recently fired from that position after telling a co-worker about an anti-war rally Guy attended.

Guy:  As usual, I was active — giving my opinion on Facebook, going to demonstrations in Tel Aviv against the war. I feel that we can solve this situation in a very different way — a diplomatic way.

One day I went to YouTube and saw an Israeli kid refusing to join the army. He said he doesn’t think war or an army effort will bring any solution. I thought it was really smart and brave what he did. So I put this on Facebook.

One of my relatives told me on my Facebook that I should go to Gaza and get killed there. Another said I should get hit with a stone and change my views and [that] I am crazy and naïve. My cousin wrote on Facebook, “You got your grandmother angry, you should give her a call and say you’re sorry.”

I did call my grandmother. I didn’t want to make her upset. And when I called her she was completely frightened. She was walking down the street, and said, “I am afraid to talk to you on the street. Someone will hear me — call me afterwards at my house.”

I feel we live in a very creepy time when my grandmother is afraid to talk to her grandson. But I did what she asked and called later. She said she can’t sleep at night because of me. She said there is no way of peace ever with Arabs, that I should give this idea up.

I said, “Grandma, you are the old generation. You have no hope for a future between Jews and Arabs. But how can you be angry at me that I believe in peace? I still have hope that one day my kids don’t have to go to the army every two years to murder children, or get murdered themselves. I need to have this hope.”

I went to visit my family. My mom was home, and was very upset. She said she can’t go on with this anymore — that all her family goes against her, blames her for all the things she did wrong raising me; if want to get married, no one would come to my wedding; if I need support, no one would support me and thinks I’m a traitor.

So I started lying to my father and mother, saying I was going home instead of going to anti-war demonstrations in Tel Aviv.

Liron: I never go to anti-war demonstrations because I am not politically involved. And one night Guy did go. He called me from the road back home and said he needs to take a detour and go a longer way because of people who want to harm and be violent toward leftists.

Guy: Some people I know got beaten up, pushed. One person after a demonstration sat in a restaurant — a rightist came and broke a chair on his head, sending him to hospital.

She told me, “Yes, I heard it on the news.” She was very okay with it.

I asked her, “Do you think it’s okay to behave in a violent way toward people who express different opinions?”

She said, “When it comes to soldiers who go to war, then yes, it’s okay. It’s okay to hit people who speak against soldiers.”

I know the demonstration was not against the soldiers ... [it was] against the war. So at that point I understood that the subject of the conversation was explosive, and I stopped.

A few days after the conversation ... my friend, also a kindergarten teacher, said another kindergarten assistant told her I am disgusting, that I am against the soldiers and against the war —things I didn’t say.

I got a phone call from the manager telling me, “Oh, with all the pressure I forgot to tell you, I am splitting your kids in the kindergarten in two groups, because it is a small group now.” And she said, “From this day on, you shouldn’t come to work anymore.”

I can understand the technical reason, that the group is small. Maybe more financial to split them apart. After she told me that I was fired, I told her, “Listen, after you finish all your things you need to do, please call me. I need to talk to you.”

She said, “We’ll see if I have the energy to talk to you.”

She never told me the reason she’s firing me, but I have no doubt it is because of this. I lost my job because people don’t accept other people’s opinions.

Guy: I love my country. I love the people. I love the land. But this is crazy times. My girlfriend loses her job and I have to disconnect my family from my Facebook. This is very frightening times.

Liron: I experience Israel as a place where you can express a different opinion and talk about things. But during war it just wasn’t possible.