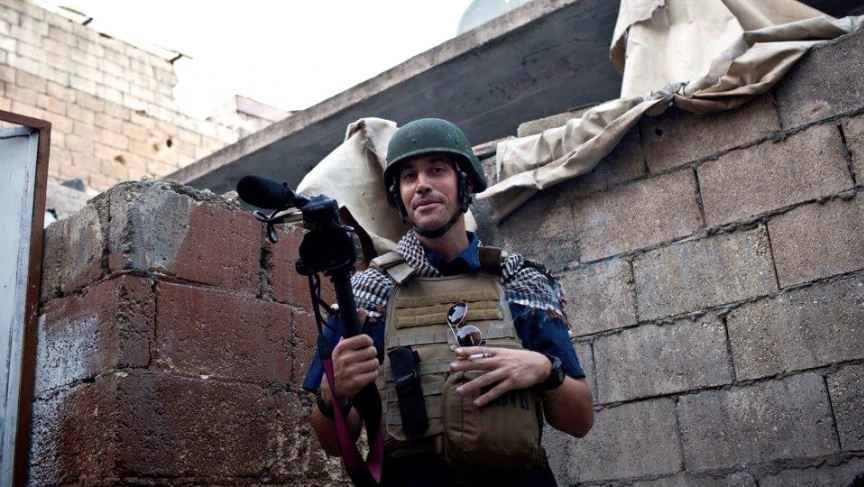 James Foley, reporting in Aleppo, Syria, soon before he was kidnapped in 2012.
Credit:

President Barack Obama had high praise on Wednesday for James Foley, the American journalist who went missing in Syria nearly two years ago and died in a brutal execution by ISIS on Tuesday.

Obama praised Foley's “sense of hope and civility. That's what Jim Foley stood for: A man who lived his work, who courageously told the stories of his fellow human beings.” As for the members of the extremist group that now calls itself the Islamic State, the president said, “The entire world is appalled.”

“No just God would stand for what they did yesterday or every single day," he said.

Obama also offered condolences during a phone call to Foley's parents, who later spoke to reporters outside their home in Rochester, New Hampshire. Diane Foley said faith and prayer — Foley was a devout Catholic — helped sustain her son right up until the end. “That's what gave Jim an unusual courage,” she said.

“Jim would never want us to hate or be bitter,” Foley went on to say. “We are just very proud of Jimmy and we are praying for the strength to love like he did.”

Jim's father John said the Foley family's thoughts are with other journalists, including American reporter Stephen Sotloff, who are still believed to be in the custody of militants in Syria. “We beg compassion and mercy of Jim's captors,” Foley said.

“This family is extraordinary,” says Charles Sennott, co-founder of the GlobalPost and head of The GroundTruth Project, a partner of PRI.org's. Sennott was a colleague and friend of James Foley, who was a longtime contributor to The GlobalPost.

Sennott says he has gotten to know the Foley family well in recent years, particularly since sharing the stress of Jim's first kidnapping during the war in Libya in 2011, when Foley was held for 44 days.

“We've seen them in some really happy days,” Sennott says. “And now, of course, with this devastating news. But one thing that shines through with this family that is really worth pondering for a moment is their strength, their incredible faith.”

The Foley family's Catholic faith has clearly helped sustain them during this nearly two-year long ordeal, Sennott says. But he adds that Jim's parents have also demonstrated tremendous faith in their son as a journalist and the work he that he dedicated his life to in dangerous places like Syria.

“They understood that Jim Foley wanted to be out there on the front lines doing work that mattered, work that made a difference,” Sennott says. “I think it's really an extraordinary thing to hear their tribute to our profession. This is what we do, but the way they articulate it is so powerful.”

In the press conference, Diane Foley put it simply: "He was just a hero.”