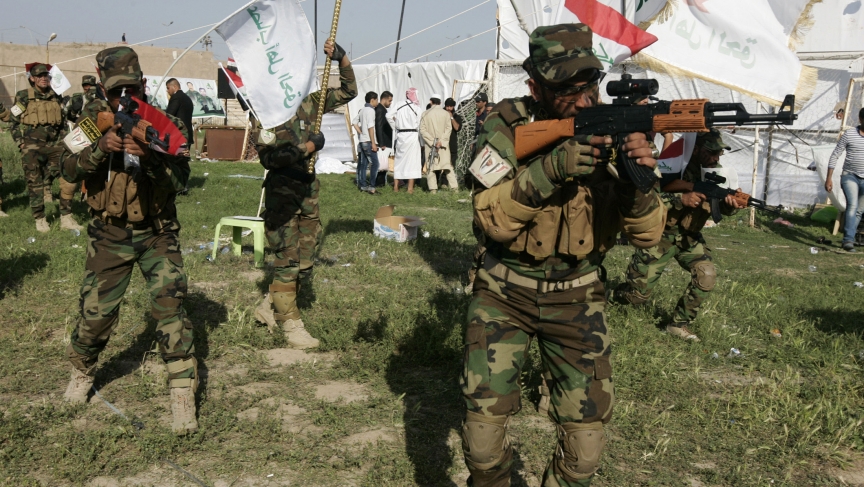 Iraq appears set for the country’s first peaceful transition of power in over a decade, but a wildcard remains: The powerful Shiite militias that police the streets of Baghdad and fight the Sunni militants who have their sights on the capital.

After eight years of increasingly divisive and sectarian rule, Iraqi Prime Minister Nouri al-Maliki announced last week that he will step down. That paves the way for Haider Al-Abadi, the man nominated as his successor, to form a more inclusive government that might help forge a political solution to Iraq’s current crisis.

With Maliki’s formal withdrawal of his candidacy, Abadi has submitted nominations for his cabinet, which the constitution requires him to form within 30 days of his own nomination.

For now, Iraq’s most powerful militia leaders say they’re throwing their support behind Abadi, insisting that they’ll leave politics to the politicians. But those assurances come against a backdrop of reports that the Shiite militias, initially called upon to bolster Iraq’s security forces, are acting with greater and greater autonomy — in some instances directly defying orders from Baghdad.

“We support Abadi and all the honest people of Iraq,” explains a top commander of Asaib Al-Haq, considered one of the largest and most powerful Shiite militias. “Our goal is to protect Iraq from any outside threats and protect all of Iraq’s communities.”

The Asaib Al-Haq leader spoke on condition of anonymity because he did not have permission from his superiors to talk to the press.

“We do not hide that Maliki was betrayed,” he says, hinting that his loyalty may be more firmly aligned with the outgoing leader than Iraq’s prime minister-select. But, he adds, in a dismissal of Baghdad jockeying, “this is all just politics.”

After a rapid invasion the summer by the al-Qaeda inspired group ISIS  — which now calls itself the Islamic State — three divisions of the Iraqi military simply collapsed. In response, Iraq’s top Shiite cleric, Ayatollah Ali al-Sistani, issued a call to arms. Militias like Asaib Al-Haq answered.

As the country’s security crisis led to a political standoff in Baghdad — that now appears to have eased with the resignation of Maliki — both those militias and the Iraqi military increased their presence on Baghdad’s streets, further straining the already heavily militarized city.

Most militia fighters were deployed to front-line positions on the outskirts of Tikrit, but armed civilian forces also fanned out across the Iraqi capital. Within days, militiamen became a common sight at police checkpoints; their vehicles, often white pickup trucks without plate numbers, regularly patrolled neighborhoods.

Despite his promise of support for Iraq’s prime minister-select, the Asaib al-Haq leader maintains that his forces remain indebted to a degree to Maliki for the arms and authority he handed the fighters in the early days of the crisis.

Another militia that enjoyed such favor is Kataib Hezbollah, a group arguably as powerful as Asaib al-Haq. Saiid Hashem says that his men are not fighting for one particular leader or a sectarian cause.

“We are fighting for our country, we are fighting in the name of Iraq,” says Hashem, who also goes by the nom de guerre Abu Warith. He conceded that the same does not go for all the armed civilian groups operating on Baghdad’s streets. Some, he says, are unpredictable, acting independently with little or no command-and-control. But he insists that his militia, a group declared a terrorist organization by the United States, has Iraq's best interests at heart.

For now, Hashem says he has no plans to run afoul of the Iraqi military. The army is supplying his men with uniforms, weapons and logistical gear. “We have to tolerate the orders from the Iraqi army because we have the same aim,” he explains, “and we are working to destroy the same target.”

But there are increasing reports that that's not the case. “We are worried,” concedes a longtime security advisor to Maliki who spoke on condition of anonymity. Even as the militias provided invaluable support for the country’s security forces, he says, Maliki’s inner circle was always concerned for the future, worried that the militias might grow more powerful than the country’s own military.

Baghdad security sources report that members of Asaib al-Haq have begun issuing themselves ranks and delivering orders to Iraqi military personnel. Outside of Tikrit, sources report tensions between militias and the military became so great that the two forces had to be transported in and out of battle separately to avoid fights over hierarchy.

A fighter from Asaib Al-Haq, who also spoke on condition of anonymity, admitted that his unit often acts independently of Baghdad. “Sometimes, when the terrorists attack, we don’t have time to wait for orders from the military," he says by phone from his post outside the capital.

Sheikh Raad, the leader of a smaller militia, the Knights of Anger, commands forces both in Baghdad and on the front lines of Tikrit. Seated beneath an Iraqi flag and a Kalashnikov, he points to a pin on his lapel of the revered Shiite figure Imam Hussein. Below it, the Iraqi flag is sewn into his military fatigues.

Initially he says the two symbols are equally important. But later he concedes that, for him, religion trumps nationalism.

“The flags, like the leaders, they come and go,” Raad says with a smile, “but the Imam, he never changes.”

Susannah's reporting from Baghdad is part of a partnership between The World and GlobalPost.